Russell Simmons accused of Sexually Assaulting Model when she was 17

Music mogul Russell Simmons has been accused of sexually assaulting a model when she was just 17, the Los Angeles Times reports.

Keri Claussen Khalighi told LA Times she was just 17 when Simmons assaulted her while his friend, filmmaker Brett Ratner, watched.

She met the 2 of them in 1991 at a casting call, she said, and from a dinner they proceeded to Simmons’ apartment to show her a music video they’d been working on.

Simmons got agressive, she said, yanking her clothes off and forcing her to perform oral sex on him.

Khalighi told the LA Times she begged Ratner for help but he just watched. She said:

I looked over at Brett and said ‘help me’ and I’ll never forget the look on his face. In that moment, the realization fell on me that they were in it together.

Simmons attempted forcing her to have intercourse, Khalighi said, but after fighting wildly, he relented and coerced her to perform oral sex.

“I guess I just acquiesced,” she told LA Times.

Khalighi said she was feeling “disgusting” and she decided to have a shower. There, Simmons came to meet her, she alleged, and briefly penetrated her anally before she fought him off. “It hurt so much,” she told LATimes.

Ratner, who had previously been accused of sexual misconduct by 6 women, denied Khalighi’s claims, telling LA Times he had “no recollection” of her asking him for help.

He added that he never witnessed her “protest.”

Russell Simmons too, in a statement, said sexual acts carried out between him and Khalighi were consensual.

He also released to The Shade Room witness accounts he said he provided to the LA Times but were not added to their report.

He added that there are discrepancies between the witness statements and the account Khalighi gave to the LA Times.

Read his statement and see the witness statements below:

As a long-time social activist, I have applauded the strength of the brave men and women who have spoken out over the past month and made their voices heard regarding sexual assault and harassment. I am a supporter of the #MeToo campaign and the victims who were previously terrified to stand up and speak out against sexual misconduct. I completely and unequivocally deny the horrendous allegations of non-consensual sex against me with every fiber of my being.

I know Keri Claussen Khalighi and remember the weekend in 1991 that she has referenced. Everything that happened between us 26 years ago was completely consensual and with Keri’s full participation. We spent time in my apartment over a period of two days and one night, as well as at some public places including Nell’s Nightclub. Much of the time we were in the presence of other acquaintances. I’m deeply saddened and truly shocked to learn of Keri’s assertions as to what happened over the course of that weekend.

Let me be crystal clear and very direct. Abusing women in any way shape or form violates the very core of my being. I have always spoken out regarding my life experiences, women’s issues and the need to bring a faster and more decisive shift in the collective consciousness that will help bring about true women’s equality. More than anything, I want my daughters to live in a more equal world and a world where they will not become victims of sexual harassment.

The LA Times article also references an allegation by Ms. Tanya Reid. I mean no disrespect to her at all when I say I honestly do not recall my telephone conversation with a hotel front desk clerk from over a quarter-century ago. 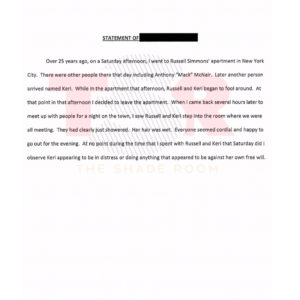 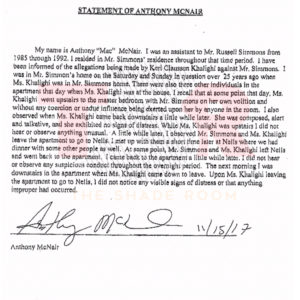 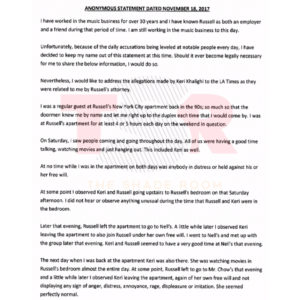