TwitterNG divided on Planned Sack of over 21,000 Kaduna Teachers who Failed Competency Test 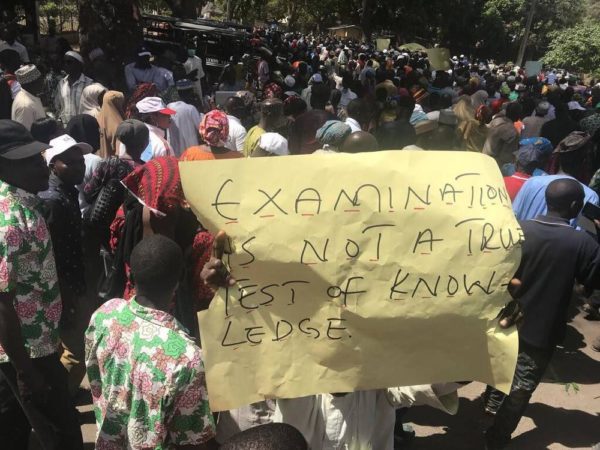 Teachers during the protest

For some weeks now, Kaduna state has been trending on social media following the planned sack of over 21,000 teachers who failed the primary four competency test administered to them.

Yesterday, the state government released two statements: one saying that there is no going back on the planned disengagement of the teachers; the other condemning the state’s chapter of the Nigerian Labour Congress (NLC) and the Nigerian Union of Teachers (NUT) for attacking the state’s House of Assembly complex and vandalising government properties.

Social media users, as usual, are divided between letting the teachers go and retraining them.

The state government has also released the scripts of some of the teachers:

We are putting these out in the court of public opinion for Nigerians to make their verdict. Here are some of the primary 4 competency test scripts conducted for primary school teachers in Kaduna State. pic.twitter.com/aMwRWPlh6f

Some of the primary 4 competency test scripts conducted for primary school teachers in Kaduna State. Be the judge. pic.twitter.com/AFCmShyYTa

Here are some of the primary 4 competency test scripts conducted for primary school teachers in Kaduna State. The future of our children must never be politicised. pic.twitter.com/Ws3glt1Wpb

The state government has also announced that recruitment is ongoing for prospective teachers who are expected to fill up the deficit.

Timeline for recruitment of 25,000 new teachers who will replace the unqualified ones.
– Submission of applications to close on or before 19/11/2017
– Shortlisted candidates would be invited for a written test on 26/11/2017. pic.twitter.com/1OcFNqijB4

#UPDATE: As at close of work yesterday, the State Universal Basic Education Board received in total, 18,550 applications from prospective teachers. Recruitment is still on. pic.twitter.com/uqqL3waKeG

Here’s what Twitter users are saying on the issue.

My Lawd and my Gawd! And some people are playing politics with this nonsense that these guys be allowed to continue to destroy the future of primary school Kids? https://t.co/b0EVCxfEWj

If na only dis one wey El-Rufai do for Kaduna, o tan.

@GovKaduna @elrufai I am one of your biggest critics, but I will scarcely ever want to criticize you again, becos you damned your second term chances by standing firm to correct the rot in Kaduna State 's academic system. Elections are almost here, you could have waited a little.

A gem of a placard from the Kaduna teachers protesting their sack for failing a competency test pic.twitter.com/Hs6QAov4Fl

If Kaduna governemnt changes their decision to sack teachers who failed the competency test, I'll give up on Nigeria education.

Nigerians can be so irritating at times. @elrufai has done the most appropriate thing in sacking the unqualified teachers. Some are suggesting training but where do u want him to start from? Send them to Pry 4 again cos I don't jst understand the sentiments. Kaduna on track

Basic Education is free in Kaduna state.. The folks saying they need retraining should advise them to go and sign up for FREE in Primary 1. Mschew! Wicked people!!!

That move to release the scripts of those illiterates disguising as teachers in Kaduna is a great one. Let me see those who will come and talk about retraining.

I believe everyone agrees that something should be done about the unqualified teachers in Kaduna.

Where we may differ however is on “what should be done” – and outright sack as Hell-Ruffy is proposing to do with them is definitely not the right answer to that question.

One solution could be to train the teachers appropriately and for a state that can afford to spend NGN10billion on feeding its pupils, training and retraining teachers should be an equal priority – except that feeding students gives more avenues for funds to be misappropriated.

For a Governor who concurs that “touching a general’s chest” is equal to the killing of dozens, sacking thousands is a solution but it is foolish and will naturally be resisted by those whose livelihood is threatened.

Cutting off ones head to solve headache is however foolish.

There is nothing noble or courageous about sacking 22,000 teachers – only foolishness and wickedness – training them is a wiser course of action.

Nigerians can be funny.

It seems many do not grasp the meaning of the rule of law.

Or that justice is a process that must be fair and clear.

The contract, amongst other things state or should state processes for promotion, appraisals, voluntary and mandated resignation.

If an employee is subjected to a process that

1. Is not part of the signed appraisal process

2. Leads to termination that was not stated in the contract

The statement that such employees failed the test is irrelevant

The relevant question to ask is was due process followed? Was it legal and binding on employee and employer based on a KNOWN signed agreement?

This is the question people should ask El-Rufai

The rule of law must prevail