#BellaNaijaWCW: How Adepeju Jaiyeoba of Brown Button Foundation is Delivering Hope to Mothers 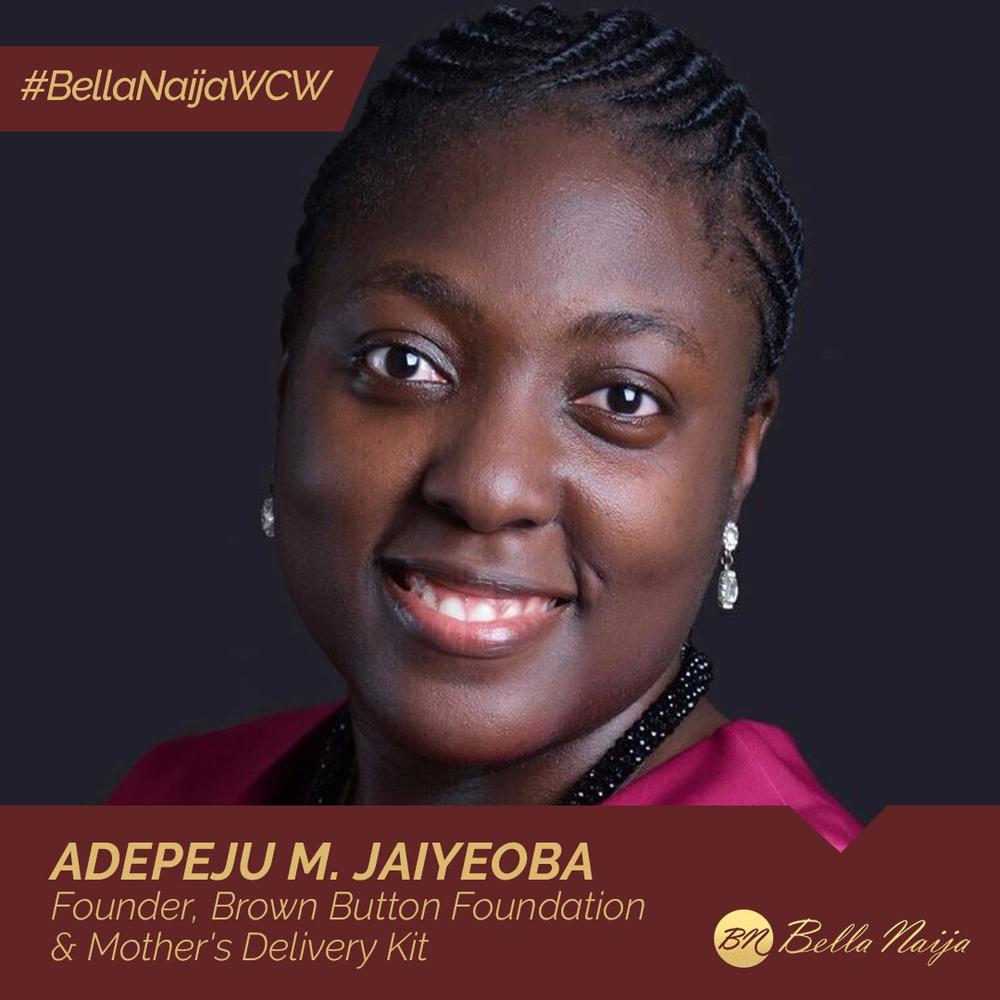 According to UNICEF, “Every single day, Nigeria loses about 2,300 under-five year olds and 145 women of childbearing age. This makes the country the second largest contributor to the under–five and maternal mortality rate in the world.”

These are not just numbers or statistics but real individuals who have passed, and families who have been thrown into agony, and let’s not forget that these are average figures and the real figure may actually be higher.

“It is apparent through the elevated mortality rates that the lack of access to or use of quality delivery services is an issue of immense importance in Nigeria. Problems such as obtaining money for treatment, distance to health facility and having to take transport are some of the many difficulties stated by women in describing difficulty with accessing healthcare.

The aforementioned lack of trained health care attended births in Nigeria is compounded by the fact that only six in ten mothers receive antenatal care from a trained medical professional,” notes WHO.

In 2011, #BellaNaijaWCW this week Adepeju Jaiyeoba lost her friend due to pregnancy/childbirth-related complications. This, and the fact that she saw women giving birth on bare floors, birth attendants severing umbilical cord with rusty blades or broken glass, jolted her into action.

The same year, she founded the Brown Button Foundation, a nonprofit organization that trains birth attendants in rural villages in Nigeria. The company has trained more than 8,000 birth attendants across the country who have also gone on to train others.

Impressive work she’s doing you may say, but she didn’t rest on her oars. After meeting a baby infected with tetanus as a result of a rusty blade being used, Adepeju and her team decided to take action and solve this problem. In 2013, she launched Mother’s Delivery Kit, a social enterprise that provides affordable sterile supplies for childbirth. So far, over 50,000 kits have been delivered.

In 2014 she was selected to take part in the prestigious 2014 Washington Fellowship for Young African Leaders. In 2015, she was recognised as a “young innovator” at the World Innovation Summit for Health and in the same year, she was was one of five emerging entrepreneurs invited to pitch her idea at a White House event showcasing the impact of U.S. government initiatives and was honoured at the 2016 Global Entrepreneurship Summit in Washington DC.

It didn’t come easy, though. According to Young African Leaders Initiative (YALI),

When she first shared her delivery kit idea with a colleague, she was warned not to give up her prestigious job as a lawyer. But after two months, Jaiyeoba became restless and approached someone else: her pediatrician brother.

With savings from her legal work and expert advice from her sibling, Jaiyeoba created 200 sample kits. “We sent out samples to different communities, and we were keen on getting feedback to improve the product,” she said. It soon became clear that birth attendants in other parts of the country had different practices and preferences.

So Jaiyeoba and the team assembled a new kit that they hoped the majority of Nigerians would embrace. One adjustment was to include olive oil — since many Nigerians, particularly in rural areas, rub both the mother and baby in the oil for spiritual protection.

Now that Jaiyeoba had something she knew people would use, she needed to find a better way to get it to them. She began to rethink her supply chain to get around Nigeria’s ailing infrastructure. With grant money from the U.S. African Development Foundation, Jaiyeoba’s team established distribution points in central and eastern Nigeria.

Not many people will take the initiative to act to solve a problem that is supposed to be the government’s responsibility, and we applaud Adepeju for her commitment to reforming how healthcare services, especially maternal and child healthcare services are being delivered across the country and the African continent.