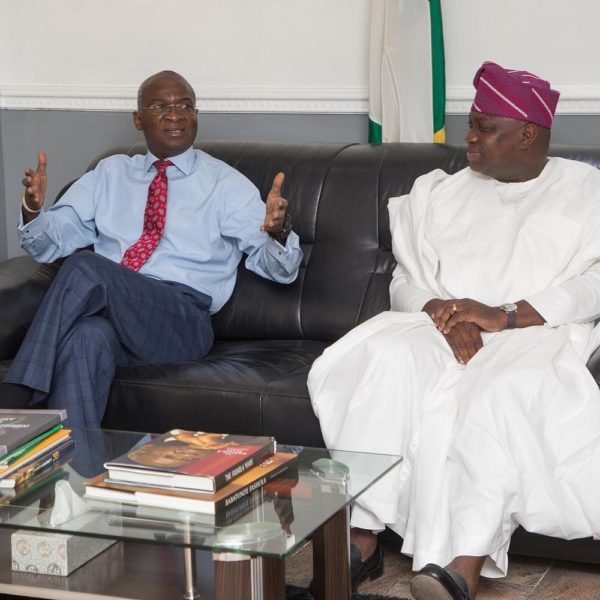 The Federal Government has officially handed over the State House, Marina, to the Lagos State Government, Punch reports.

Former Lagos State governor Babatunde Fashola, who signed on behalf of the Federal Government, described the handover as the fulfillment of the commitment and promise of President Muhammadu Buhari.

The handover, whose process was kicked off 20 years ago, was described by Lagos State Governor Akinwunmi Ambode, who signed on behalf of the state government, as a historic day that finalises the intention of President Buhari to bring positive change to Lagos. He said:

We are delighted to be here on a historic day that finalises the  intention of President Buhari to bring positive change to Lagos.

We thank the President  that approved that the presidential lodge be released to Lagos State.We have been trying for 20 years.

I am pleased that on a day like this, it is my predecessor and the current minister that is now doing the final hand over. He has also been part of efforts to get the property back to Lagos. It is by God’s doing that he is positioned today to do the final handover.

We see this as a sign of greater things and greater collaboration between the Federal Government and the state. It will improve the economy of the state because our intention is to turn that property to a national monument that we will christen a National Heritage Centre for Leadership.

We will also use it as a tourist centre to attract Nigerian and foreign tourists and use it as a means of improving the economy of the state.

Fashola described the president as a “promise keeper.” He said:

We are here to sign and exchange documents which formally vest the Presidential Lodge in Marina  in the Lagos State Government in fulfillment of the commitment and promise yet by President Buhari.

This is a long journey that has come to an end. It is a journey that has taken almost two decades when the state government continued to ask that this property be vested in it. For reasons difficult to understand, it did not happen.

It is consistent with the President’s promise to respond to many things that have been left undone. Projects like Bodo-Bonny Bridge is now bringing hope and expectation to the people of Bonny.

The project waited for almost 30 years and some works have started now. Same thing is happening with the Mambila Project that saw people of Taraba State waiting for almost 40 years.