To Fill Up a Stadium or Accommodate Fans? A Review of Olamide's #OLIC4 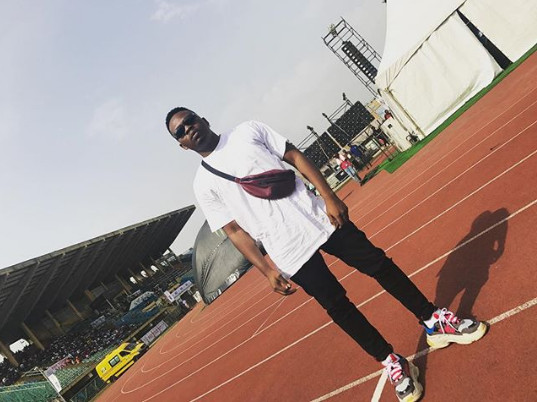 Olamide at the Venue

When Olamide announced that the fourth edition of his annual show – Olamide Live in Concert – will be holding at the Teslim Balogun Stadium, Surulere, it was received with mixed reactions. It was a different venue from the previous years, and it was not just holding outside of the “Island,” but at a stadium where it could be a daunting task to secure. But the last three editions had had Eko Hotel & Suites filled to capacity, with people not having places to sit.

With strategic partnership and the support of the Lagos State Government, Olamide was sure he could pull this off – accommodate his ever increasing fan base as well as music lovers, pull off a great show, and ensure the security of those present.

Olamide’s close friend and colleague Phyno had filled up the 22,000-capacity Nnamdi Azikiwe Stadium in Enugu, the third year in a row, days before Olamide announced the venue for his concert, and many insinuated he was trying to replicate Phyno’s effort.

While that is a good thing to replicate, we cannot excuse the fact that Olamide needed a larger venue for this year’s concert. The rapper, in an interview with Vanguard, also responded to the comments, saying he’s not competing with Phyno. “Everybody is entitled to their own opinion, and I’m just living my own dream. I’m 100% excited because this is something I’ve been looking forward to for over three years now; it’s always been about doing it big, something beyond the ordinary, giving back to the people and spreading love,” he said.

One major concern was security, especially as regards sexual harassment and assault against women. It’s such a sad reality that people may not be able to attend or enjoy a show/event without that fear. And I must say, as this cannot be overemphasized, that people should be able to attend a concert without this fear. It’s heartbreaking that this fear is caused by humans, not wild animals.

That being said, we must applaud the airtight security at the venue. When my friends and I got to the stadium and saw the security situation at the venue, we felt safe. A friend even joked that all the uniformed personnel in Lagos were at the venue. But maybe, just maybe, the organizers would have ‘sold’ this part the show (assurance of tight security), as we were certain many people didn’t attend because of the preconceived notion that the show might be taken over by hoodlums.

The show was scheduled to start at 12 PM on Sunday, December 17, 2017 and end at 7 PM, but it didn’t start until some minutes before 3’o clock with a performance by Small Doctor who has had a great year courtesy of his viral song “Penalty.”

Prior to Small Doctor’s performance, it was announced that the security team should allow guests leave their seats and walk into the field for a more intimate experience. Excited fans and music lovers trooped into the field and everyone was hyped!

Watching Small Doctor, you could see that he’s got mad love for both the craft, and his fans. His energy was out of this world, and before he ended the show, he requested for his purse so he could show love to his fans, aka settle the boys. He was restricted, due to the fear of altercation. He hesitated, but eventually found a way to make it happen – he wrapped each note (or more) into a ball and began throwing them at the fans.

After Small Doctor was an array of performances from upcoming acts – a regular feature in every edition of OLIC. Olamide giving young artistes the opportunity to shine is as sure as traffic in Lagos on a Friday night.

All this while we were having a good time, save for the sound messing up at some point and some of the upcoming acts not using the opportunity well. I, particularly, was scared the organizers didn’t get enough loudspeakers or sound engines to power a stadium. The sound was good, but in the beginning would go low from time to time. Sometimes, the microphone of the artist performing would go off in the middle of their already limited time. The sound engineers fixed this though, in the early hours of the show.

I checked social media in the middle of the show and discovered that people were decrying the “low turnout” of guests. Filling up a (24,000) stadium is no easy task and I guess Olamide’s goal was to be able to accommodate his fans and pull off a good show – which he did. I didn’t hear him announce or insinuate that he was going to fill up the stadium. (I don’t think anyone who plans to fill up a 24,000 capacity stadium will announce it less than a month to the event). It’d have been really awesome to fill up the stadium but that didn’t happen. I’m certain, as anyone who attended, that Eko Hotel would not have accommodated the crowd yesterday. So, there was no “low turnout,” just that the stadium was not filled up, and to me, that’s just fine.

One highlight for me was the vintage performances. We had a great time vibing to hit songs from our childhood (I’m not that old) as well as those of some years back. I’m talking about performances from Baba Fryo, Daddy Showkey, Sound Sultan, Marvellous Benjy, Olu Maintain, and “King of the Zanga” Durella.

The street was duly represented yesterday…  Shaku Shaku, Azonto, Galala, Alanta, One Corner, and all the crazy dance moves were displayed on, off, and backstage. The werey was flowing freely and virtually all the guests had a good time, either as those making all the viral dance moves, or as those watching with smiles and laughter all over their faces.

The night ended with Olamide’s set and by this time, the expectation was already so high. We had thought he would be climbing the stage much earlier, do a first set (and even a second later on) and finally close the show. But we didn’t get that, sadly. It didn’t feel like an Olamide concert. It felt like a concert with Olamide as headline act. We didn’t see Olamide till it was time for him to come on stage. We love you Olamide, we want to see you (and your heart and energy) on stage, we want to watch you perform some of our favourite songs under your name.

During his about 20-minute set, Olamide performed hits back to back, brought Phyno on stage at some point, they performed “Augment” and “Fada Fada” together, continued his performance, and ended with one of the most viral songs of 2017 in Nigeria – WO!

Security was still tight (enough to get you to your car or a bus stop) as at the time I was leaving – between 9 PM and 10 PM. I’ve not read any report of theft, sexual harassment or assault and I hope it is because nothing of such happened, not because it wasn’t reported.

In all, kudos to the team that pulled this off. People were scared to show up, and that’s understandable. Thankfully, those that made it attested to the fact that the security setup was way better than what they envisaged.

The World of Superheroes! Celebrate this Festive Season with Toonami on KwéséTV (Channel 510) & ToonamiAfrica.com!