Get the Scoop on Mama Tobi's Homecoming Concert in Lagos | Wednesday, 20th of December 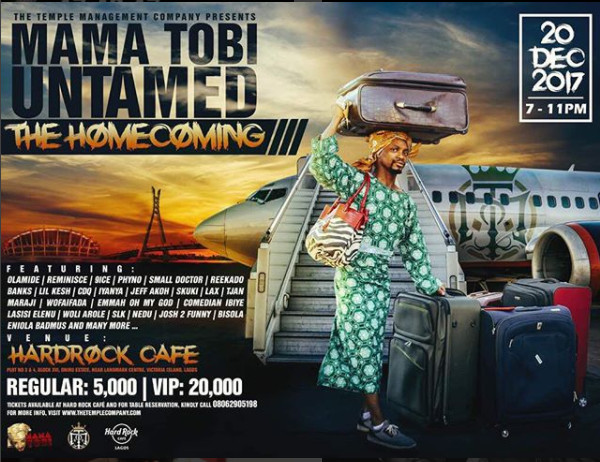 Packaged by Temple Management Company, the event promises to be a night of drama and entertainment enriched by live stage comedy skits that has established Mama Tobi as one of the toasts of Nigeria’s growing internet comedy craze.

Joining Mama Tobi to entertain on the night are musicians including Olamide, Phyno, Reekado Banks, Small Doctor, 9ice, Bisola, Jeff Akoh, L.A.X and CDQ among others.

Also to spice up the occasion with rib-cracking jokes and comedy skits are Maraji, Lasisisi Elenu, Josh 2 Funny, Woli Arole, Kenny Blaq, Wofaidada and Emma Oh My God among others.

BellaNaija is a media partner for Mama Tobi Untamed (The Homecoming).

Animania World Tour! Thrill your Kids with their FAVE Characters this Season on M-Net Movies Smile by DStv