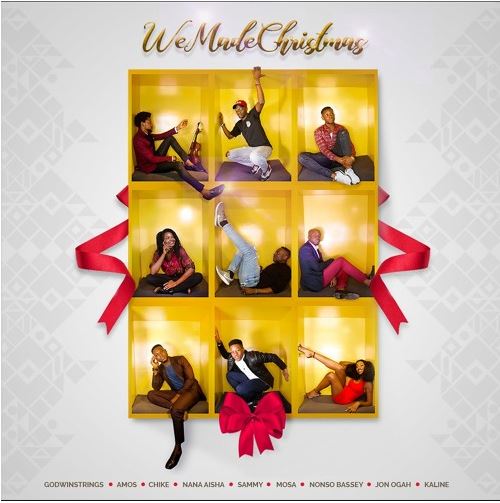 The Zawadi Project‘s “We Made Christmas” is an annual campaign where selected Artists come together to create covers of Popular Christmas songs.

Kaline – “Have Yourself A Merry Little Christmas”

Kaline delivers this version of “Have Yourself A Merry Little Christmas” for #WeMadeChristmas in a unique way infusing an Afro-centric style that leaves the listener breathless.

“Have Yourself a Merry Little Christmas“, a song written by Hugh Martin and Ralph Blane, was introduced by Judy Garland in the 1944 MGM musical Meet Me in St. Louis.

Nana Aisha delivers this version of “Santa Baby” for #WeMadeChristmas in a style that leaves you dancing and wanting more music.


Jon Ogah – “All I Want For Christmas“

Jon Ogah joins The Zawadi Project and brings heavy vocals on this Up-tempo #WeMadeChristmas cover of “All I Want for Christmas Is You“.

“All I Want for Christmas Is You” is a Christmas song performed by American singer and songwriter Mariah Carey. She wrote and produced the song with Walter Afanasieff. Columbia Records released it on November 1, 1994, as the lead single from her fourth studio album and first holiday album, “Merry Christmas” (1994).

Chike puts a spin on “Someday at Christmas” for this #WeMadeChristmas album by the Zawadi Project. He sounds like a cross between Stevie and Frank Sinatra.

“Someday at Christmas” is a Christmas album by Stevie Wonder, released on November 27, 1967 under Motown Records. The title song off the album became a Hit.

Producer and R&B Artist Mosa, effortlessly renders an A Capella version of “The First Noel” for the Zawadi Project #WeMadeChristmas album.

“The First Noel” is a traditional classical English Christmas carol, most likely from the early modern period, although possibly earlier. Noel is an Early Modern English synonym of “Christmas”.

Nonso joins the #WeMadeChristmas album by the Zawadi Project to deliver a powerful version of “Oh Holy Night“.

“Oh Holy Night”  is a well-known Christmas carol composed by Adolphe Adam in 1847 to the French poem “Minuit, chrétiens” (Midnight, Christians) by a wine merchant and poet, Placide Cappeau.

Sammy joins The Zawadi Project to bring a lot of love on this #WeMadeChristmas cover of “Silent Night“.  His voice on this song evokes a lot of emotion.

“Silent Night” is a popular Christmas carol, composed in 1818 by Franz Xaver Gruber to lyrics by Joseph Mohr in the small town of Oberndorf bei Salzburg, Austria. It was declared an intangible cultural heritage by UNESCO in 2011. The song has been recorded by a large number of singers from every music genre.

Godwinstrings joins the #WeMadeChristmas album by The Zawadi Project to deliver a breathtaking rendition of “Oh Holy Night“.

Davido joins Wizkid on stage for #WizkidTheConcert and TwitterNG reacts!