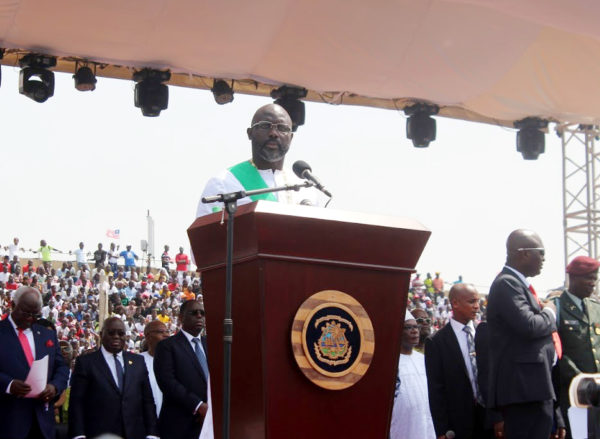 Former soccer star, George Weah, on Monday took the oath of office as the 24th President of Liberia with a pledge to build an equal, free and just country.

Delivering his inaugural address, Weah promised to do everything within his powers to be the agent of change that Liberians had yearned for over the years.

He emphasised that corruption would not be condoned in his government, emphasising that government officials caught enriching themselves at the expense of the people would be prosecuted. He said:

It is my belief that the most effective way to directly impact the poor, and to narrow the gap between the rich and poor is to ensure that public resources do not end up in the pockets of government officials.

I further believe that the overwhelming mandate I have received from the Liberian people is a mandate to end corruption in the public service. I promise to deliver on this mandate.

As officials of government, it is time to put the interest of our people above our own selfish interests. It is time to be honest with our people

For those who do not refrain from enriching themselves at the expense of the people, the law will take its course. I say today that you will be prosecuted to the full extent of the law.

Weah also called for foreign investors to come invest in businesses in the country. “Liberia is open for business,” he said.

To the private sector, I say to you that Liberia is open for business. We want to be known as a business-friendly government.

We will do all that is within our power to provide an environment that will be conducive for the conduct of honest and transparent business. We will remove unnecessary regulatory constraints that tend to impede the establishment and operation of business in a profitable and predictable manner.?