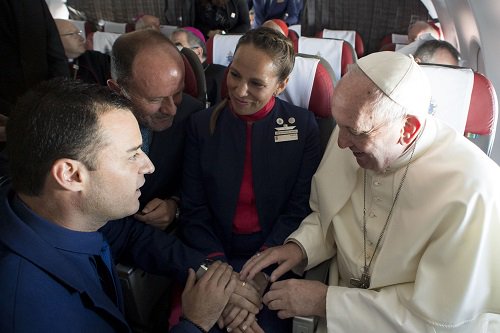 Paula Podest, 39, and Carlos Ciufardi, 41 have been civilly married since 2010, but when the February 27 earthquake of same year damaged the church in which they were due to marry, they didn’t go through with the ceremony.

According to Catholic News Service, the couple, who are both flight attendants for Chile’s LatAm airline, were working in the flight which Pope Francis was travelling in and they walked up to him, explained their story, and requested that he blessed their marriage.

Ciufardi said the pope asked the them, “Well, do you want to get married?”

“I said, ‘Well, yes. Are you sure?’ Then the pope said, “Are YOU sure?’ I told him, ‘Yes! Let’s get married,’” Ciuffardi said. And at 36,000 feet above sea level, the pope officiated the first-ever airborne papal wedding, in a flight from Santiago to Iquique, Chile.

“He told me it’s historic, that there has never before been a pope who married someone aboard a plane,” Ciufardi told journalists in the aisle of the Airbus 321. 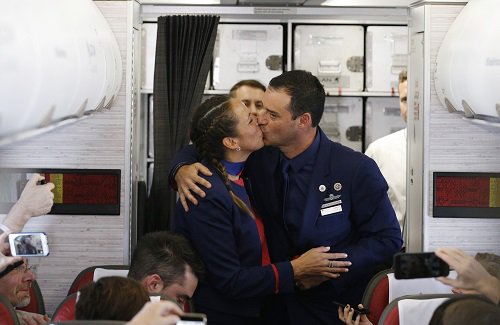 According to ABC, the couple, who have 2 children – Rafaela, 6 and Isabela, 3 – together, plan to take a “mini honeymoon” and return to Santiago on Friday.

See the couple’s marriage license below:

A Vatican photo of the hand-written document, signed by Pope Francis, attesting to the wedding aboard the papal plane of Paula Podest Ruiz and Carlos Ciuffardi Elorriaga https://t.co/U94anQ0T34 pic.twitter.com/Gig2s27hND

Schools Shut Down in Ebonyi State over Lassa Fever Outbreak