She claimed that Fakoya was in the habit of failing female students unless they slept with him. She wrote:

Oprah’s speech on Golden Globe tonight inspired me to post this.

“Dr.Med.Dr” Francis Andy Fakoya of Anatomy Department OAU Ife-Ife,Nigeria , you destroyed many young lives through your sexual harassments. As that was not enough, you used your power as a teacher to Medical Students, to fail any student that refused you. Some of the student victims repeated the class, some like me were lucky to have just a resit, while some were thrown out of Medical school. I chose to say NO to you and you failed me in Anatomy 2 times (Part 2 and Part 3), which are the only failures I have on my transcript!!! I remember your words to me both times, a day before both exams, “Agree to sleep with me or you fail and resit the exam”.
Wherever you are tonight, for all the lives you affected negatively, TIME’S UP!!!

Pls share this post as many times as can until this message gets to him! He destroyed too many lives. 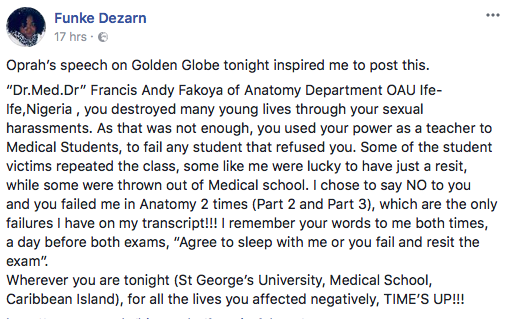 Some comments under the post also confirmed the allegations sharing their own stories:

Princess Charlotte’s First Day of School Photos are so Adorable