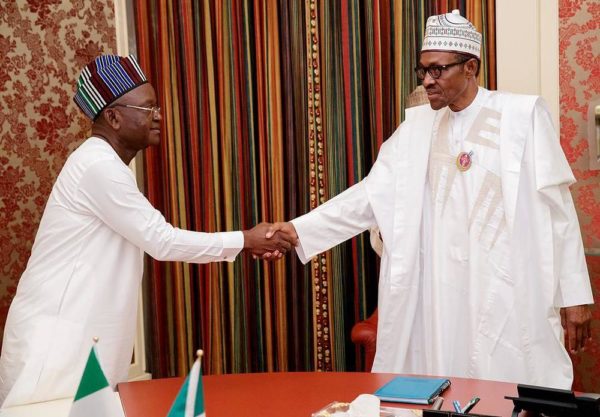 Benue State Governor Samuel Ortom has said he supports anything that will bring an end to the killings of people in his state, Premium Times reports.

Ortom spoke after meeting with President Muhammadu Buhari at the Presidential Villa in Abuja.

Ortom, who on Monday said people around the president are frustrating his communication with him, said to State House correspondents that he never accused anyone of blocking him from seeing the president.

He said he’s always had access to the president, adding that he speaks to him on the phone. He said:

I know what it entails being a president. Even as governor most times I am not with my phone, people cannot access me the way it used to be, talk less of a president. I didn’t say that and I have not said it.

Asked if he believes a full scale military operation could put an end to the herdsmen killings, Ortom said:

Speaking on the allegation made by the Chairman of the Mayetti Allah Cattle Breeders Association of Nigeria (MACBAN), Garos Galolo that the January 1 killings were in retaliation of 1000 cows stolen from the herders by people of the state, Ortom said:

You know that man is a liar. Gololo is a liar, he is a wanted man in Benue State, we don’t even know where he is. He stays somewhere and makes allegations. The other time, he said 1,000 cattle drowned and the herdsman decided to commit suicide by jumping into the river. He has not come out to justify what he said.

Ortom added that although he does not understand the Federal Government’s plan of creating “cattle colonies,” he believes the solution to the open-grazing bill is ranching, as he has often repeated. He said:

And it is not just practised in other parts of the world, on African soil in Swaziland, South Africa, Kenya, Tanzania, Mozambique, almost all African countries that rear cattle, they ranch. So why can’t we do the same thing here? For the colony thing I don’t know what colony is.