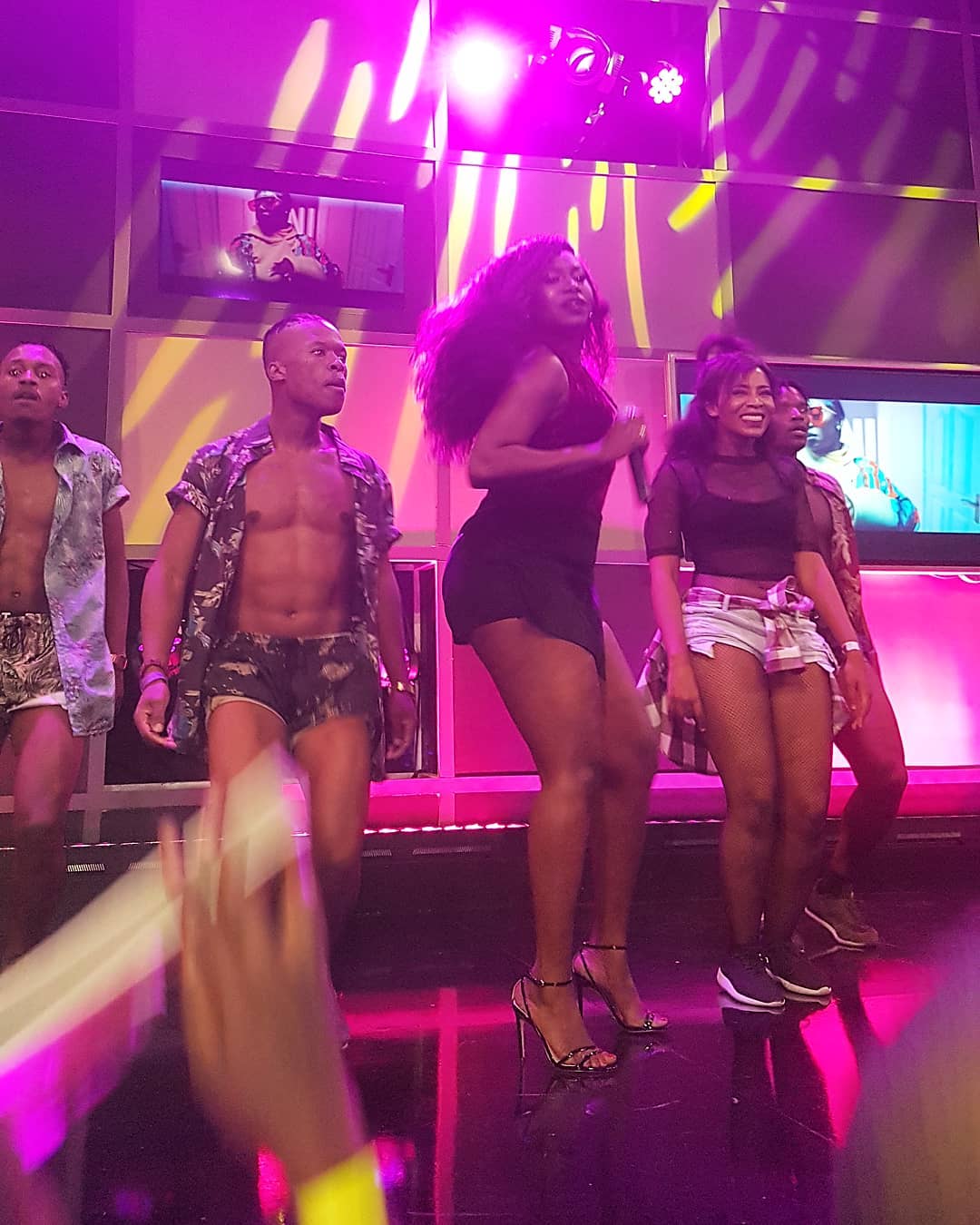 Did you watch day 14 of the Big Brother Naija 3 reality show?

Although there seemed to be a lack of activity in the House, there was an obvious excitement for the late night Saturday events that usually shake the Housemates up and aid in revelations of their alter egos all thanks to some liquid courage.

While the other Housemates continued with the horrendous screw pins and nuts punishment that was not so horrendous but “therapeutic” as Teddy A had put it; Ahneeka and Teddy A joined by Ifu Ennada discussed the previous day’s event that led to Ahneeka exploding without warning and leaving a sour taste in both their mouths. Both parties explained their stand points and the feud died down instantly.

There was an argument between Nina and Ifu Ennada that was egged on by name calling and explicit disrespect against which Miracle stood boldly and defended Nina’s honour, pulling Ifu’s ear and letting her know that she’s older than Nina and should behave accordingly. The indirect warning seemed to have been heeded because Ifu Ennada looked somewhat apologetic about her behavior.

On a lighter note, the Valentine’s inspired party brief was received and the Housemates dove right into the preparation, admiring the very glamorous attire. The party was not short of any dirty dancing and grinding with Tobi displaying unusual freedom and Cee-C letting him have his glory while she had her own. Rico Swavey should get a stamp of approval as class clown because he was literally all over the place.

After Tobi’s use and abuse of freedom in the form of a half strip, we need to thank the gods for liquid courage, Princess blurted out that she was into someone’s man and that person should be careful, not failing to actually call Miracle out. She’s definitely not giving him up anytime soon.

As the possibility of being evicted looms on the horizon, the Housemates seem to be full of raw emotion, tension and wild energy.

It could have been the alcohol, pre-show jitters or just something in the air, needless to say there were lot of tears flowing through the Big Brother House last night. First Lolu absolutely broke downto his core after DJ Xclusive recognized him at the Saturday party. Was it all just a star struck burst of emotion or was Lolu feeling some type of way in accordance with some kind of strategy? Later in the night, a few of the Housemates had some deep midnight chats, consequently Alex also has an emotional explosion, saying that she will be the one to go home tonight. Both Leo and Khloe ran to her aid and comforted her and Khloe told her that it was “just a game”.

Tonight is the Live Show and the Housemates are fully feeling the heat. After Biggie requested that everyone start getting prepped, the gossip began to flow. Princess openly stated that she hopes she is not going home tonight because she wants to get Tobi and Cee-C out the House. She also spoke about Karma where she was secretly, not so secretly referring to Cee-C. Meow! Angel and Ahneeka also had an interesting “romantic” conversation last night where Angel asked Ahneeka to be his “special babe” in the House. After slapping him with some rules, she agreed. Really feelings or strategic move? Only time will tell.

After all the action, gossip and tense exchanges last night, there is a weird energy in the House. Even though everyone is getting primped, preened and glammed up to the nines, all the Housemates are visibly tense. Apart from Angel who is all smiles, Alex has been stressed since waking up, Tobi has been very scarce and Anto has been extremely vocal, sharing her opinion on everything from hair to her opinions about work and life outside the House. All the Housemates are awaiting their fate tonight and even though no one will actually be evicted, the dynamic will definitively experience some big changes. Biggie knows how to shake things up.

Tonight will be the first time the Housemate’s face “Eviction” and it’s no surprise that the pairs all have their own theories and strategies about how things will pan out.

Alex has been very emotional lately, last night she was crying over the prospect that someone will be going home tonight. This was definitely not alcohol fueled as her tears flowed well into today. Leo has been there trying to help her every step of the way but it is obvious that her tears are a result of the fact that she nominated Khloe and the two have become noticeably close recently. Looking visibly stressed this morning in the garden, Alex told Leo that she thinks it is strange how so many people are starting to be nice to her lately.

Princess has been very vocal about the fact that she is into Miracle and this morning, her and partner Bitto lay into Nina about her relationship with him. Even though Nina stated that they have an agreement and that she has a boyfriend outside the House. Nina said they are just “friends”. Bitto and Princess made light work of destroying her comment. Is this all part of a strategy or are Prito burning bridges?

Vandora and Dee-One have become quite the underestimated power couple in the House, they are both smart in the way that they have managed to fly under the radar and stay on a good vibe with most of the Housemates. As the pair have not been nominated, they spent some time this afternoon dissecting the current situation. Vandora told her partner that she thinks it is funny how most of the Housemates do not think she is smart and this works to her advantage. They both came to the conclusion that Leo is in fact the actual player in the House and is making moves on many of the ladies. Dee-One expresses that he does not think Tobi is strategic enough in his moves and he thinks that Cee-C has a huge influence over him.

After a rocky week of ups and downs, both Teddy A and BamBam looked really loved up this afternoon on the couch. Laying on each other, holding each other and being super affectionate. What is Teddy A playing at here? BamBam also knows where he stands with her emotionally so could she be going with the flow because of audience appeal?

The royal couple of the House have garnered mixed feelings from many of the Housemates. Obviously they are not “Nominated” tonight but in a conversation this afternoon, Cee-C blatantly tells the HoH that he is not who she thought he was.

Who do you think the next BB Naija power couple will be?

All Humbled and Learned

On the second week of the season themed “Be Humble and Learn”, Big Brother took Housemates for a rollercoaster ride that left no one uncertain of who ruled the House.

Step by step, Biggie took an enormous pleasure tormenting Housemates, first through the mock Nominations that exposed brittle male egos from amongst the biggest and brawniest.  While the saying goes that one should always keep their friends close and enemies closer, for Tobi, Teddy A was a dangerous rival to be eliminated at the first occasion. These two had been looking at each other from the corner of the eye and following the side-lining are unlikely to patch things up anytime during their stay in the House.

The Second Time Around

That being said, Biggie’s luck did strike twice when Tobi was reappointed Head of House. Sadly though, it didn’t stick around longer as for the second time Housemates loss fifty percent of their Wager. But it is Biggie’s hand that gives and takes, sending shockwaves at will, and as always he made sure that his protégés never missed any luxuries of time, food and leisure, cajoling them with drinks, treats and entertainment before inflicting them with more invisible wounds.So after a few lenient days, not without stern warnings coupled with unbearable punishments, Biggie’s wrath stroked the House like a thunderbolt. The spirit of “Be Humble and Learn” took its full significance when egos were stripped naked, and Housemates had to hit and be hit with sour criticism from their peers.

Beneath the glitz, wins and peace offerings, Housemates were knocked out right in their guts. As the painful fallout unravelled, cracks started to appear in the couples, with Cee-C and Tobi, Miracle and Nina successively bickering. The increased frequency of outburst of tears and rants peaked when the Lolu broke down in tears after DJ Xclusive. Unpredictably, Biggie never stopped doting on his nest and sprinkled moments of joy among Housemates, with some like Bambam and Teddy sealing these much needed breathers with a kiss.

As a new week started, Host Ebuka took a moment to chat Housemates up, poking Cee-C and Miracle about their relations with Tobi and Nina. Well Cee-C couldn’t stand being put on the spot as she hid her face behind Tobi’s shoulder. While Miracle’s embarrassed grin forced him to shyly look away.

There was so much more bang for Big Brother’s bucks tonight, as Host Ebuka grilled the Nominated pairs further. He called on Pritto, Loto, K_Square, Angelifu and Bamteddy to rise only to Save Loto and K_Square. One could have heard a pin drop, as the remaining Nominated pairs held their breath. In the heat of the moment, some serious teeth grinding, eye twitching and fist tightening happened.

After a brief interlude to chat other Housemates up, Host Ebuka casually informed the Nominated pairs that it was actually a big fat and fake joke, that they were Safe and that the real Nominations were only just about to start. No one expected that it would be self-composed Anto who upon hearing the news fell on her knees, hand-wiping tears and shaking of relief. It also came as a surprise that Lolu collapsed into Alex’s arms to be hugged while loudly wailing, although his sobbing was covered by louder shouts of joy.

Riding the wave of respite, Host Ebuka introduced a hips-shaking game to shortlist the runners to the Head of House title. In the Arena, the ladies of the House gracefully though hysterically executed themselves, and Khloe, Ifu-Ennada and Bambam emerged as the triumphant trio. Then the guys of the House had their turn, but their performance was so out-of-sync and so loud that within seconds, Big Brother interrupted the game, disqualifying all of them in one breath. Poor guys – the look of defeat on their faces was priceless as they dragged their feet out of the Arena.  But defeat as the saying goes is only a bad news.

Who do you think will rock the #BBNaija Chair this week?

Have you been watching? What did you think of the Day 14 activities?