#BBNaija - Day 50: Without You, Second Time Around & More Highlights 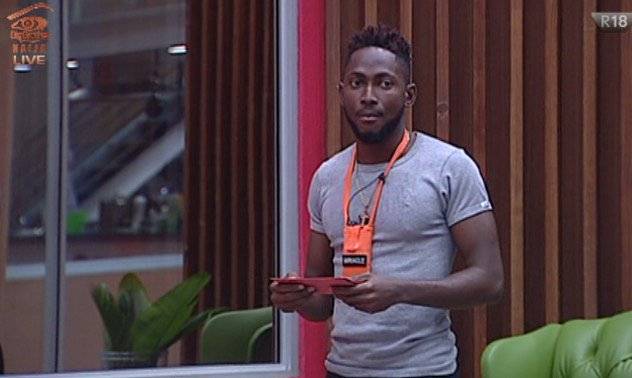 Did you watch day 50 of the Big Brother Naija 3 reality show?

Good and Bad all Around

After defying Big Brother and conspiring in the House, Tobi was issued with his second strike in the game, which means one more wrong move will see him being disqualified in the game.

He now joins Lolu and Cee-C who each have already been issued with two strikes each. Also, Anto’s journey came to an end as she was voted out with the least number of votes. Not all doom as sad as all evictions are they have to be done because at the end of the day, it’s a competition and eventually there has to be one winner.

With that said, yesterday wasn’t all about bad news for the Housemates. For Tobi it was a bit of both as he and Rico Swavey emerged as the winners of the Nokia task.

As if that was not enough, Biggie also announced that the Housemates have won their Wager, something that hasn’t happened often with these Housemates.

At the end of the day it was all smiles when their PayPorte goodies were carted away.

Lolu and Anto shared a special bond, they were like partners in crime who were known and feared for their formidable mind power and highly cerebral perspectives. This morning, Lolu admitted that his bed suddenly felt too big.

After the workout and the breakfast, Lolu and BamBam sat at the dining table for what turned out to be an intriguing conversation.  Lolu said that he felt he and BamBam understood each other even though they had rarely spoken. He added that their peers always expected a reaction from them, and tended to feel that both BamBam and he were fake by their ‘water knows no enemy’ attitude.

In an unusually candid mood, BamBam said that she felt like an ATM machine, always expected to give back what she gets, while she didn’t feel that she needed to reach all of the time to every single jab, joke or juice. Patiently listening and deeply analyzing her, Lolu nodded in agreement for he also shared the same trait. BamBam believed that people should just mind their own business and not meddle into others’ lives. For BamBam, the only Housemates she owed an allegiance to were Teddy A and Rico Swavey, and she said she didn’t care what others thought of her.

You’ve Got My Ear

However BamBam added that she had to confront Alex about her comments made during the previous day live Eviction show. Lolu then advised her to come out of her shell, and show more of herself as much as she may want to use the ATM analogy. BamBam appeared to take great comfort in Lolu’s words and admitted she hadn’t come with a strategy and was only taking in a day at a time. Lolu cheered her up that he never thought she was fake but felt she could have acted differently in certain situations.

Did Lolu strategically sweet-talked BamBam so that she wouldn’t Nominate him or was he sincere during their chat?

The Second Time Around

It seem as if Biggie’s challenges increase in quirkiness as the weeks go by.

Today Biggie asked Housemates to fit stockings on their heads and walk in line to knock the water bottles on their path. However the trick was that Biggie’s Ninjas had added a tennis ball in the stocking that Housemates had to enter in a white cup at the end of their bottle line.  Upon learning about this twist, Tobi, Lolu and their peers all burst into laughter and Nina was still giggling by the time they all took their position behind the lines, all ready to compete.

On the sound of the buzzer, with hands in the back, Housemates stumbled around as they strove to advance as fast and focused as possible. Yet chuckling could still be heard as the Challenge appeared more puzzling than anticipated. Although all had started at the same time, it is Miracle whose cup was filled first. He lit up to be acknowledged again and when Biggie asked him to choose a Housemate to share the luxury bedroom didn’t hesitate to name Nina.

Tonight Biggie put on a good show for the Housemates. The Fake Nominations went off without a hitch and there was no letting on that things have been turned on its head.

Technically, tonight’s Nominations may not count for Eviction but they were certainly still very interesting. BamBam racked up five Nominations which means that she was the Housemate with the most Nominations. Rico Swavey got three Nominations bringing him in as the second highest Nominated in the House. BamBam has clearly been getting under many of the Housemates skins, either that or they see her as a major threat.

There were some other juicy insights that occurred during tonight’s fake Nomination session. Lolu nominated his onetime strategic partner Cee-C, Teddy A and Tobi obviously see each other as a threat as they Nominated each other. Cee-C also straight up Nominated BamBam which is obviously something that has been simmering since her frustrations with the Nokia Task.

It could have been the fact that Miracle won HoH or purely that they do not see her as a threat but Nina was the only Housemate that was not Nominated by anyone. The squeaky clean Housemate manage to evade Nomination completely but chose to Nominate BamBam and Rico, this was a completely different choice to that of her in-House lover and resident HoH Miracle who chose Cee-C and Lolu.

All of this is nothing but a ruse to allude the Housemates to the fact that not only will there be no Evictions on Sunday but there will be two of the Evicted Housemates coming back into the House– What a way to spice things up!

Tonight has been an eventful one for the Housemates, first they Wagered 75%, then went straight into the Fake Nominations, followed by the Lumapil Forte Task.

After being separated into three teams, the Housemates were required to formulate presentations about Malaria and the major effect it has throughout Africa. Team A consisted of Tobi, Lolu and BamBam. Team B was Rico, Alex and HoH Miracle and Team C saw Teddy A, Nina and Cee-C. This presented an interesting dynamic, especially after the fake Nominations where a lot of true feelings came out.

There was a definitive difference in each of the presentations, it was clear that Team A lacked a bit of chemistry as their presentation was extremely formal and stiff. Team B showed a lot more flair with Rico being his usual funny self and Alex beaming with positivity at the podium. Finally Team C brought a healthy dose of drama with Teddy A playing a doctor and Cee-C and Nina performing a medical re-enactment. They poked fun at Miracle and Nina’s relationship in the House and even though they got a few facts wrong, it was still a good laugh.

The Housemates are fully in the game now and have learned that they need to make the most of their Tasks not only because they can win big but also because they cannot mess with Biggie. After Tobi got two Strikes yesterday and Anto’s Eviction was fresh in their mind, all the Housemates know now that they need to play the game with everything they’ve got. This was evident in their effort tonight and the last few Tasks before this. It will be interesting to see how the dynamic shifts when two of the Evicted Housemates will return to the House.

Have you been watching? What did you think of the Day 50 activities?