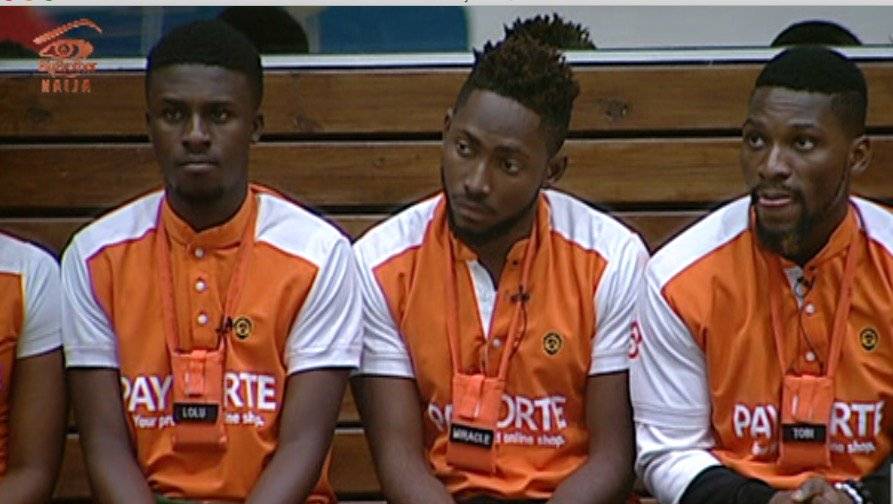 Did you watch day 54 of the Big Brother Naija 3 reality show?

We Came We Saw

Against all expectations, Biggie asked Housemates to dress up to the nines and get ready to enter the Arena for the last round of Championship Challenge. As they walked into the gaming room, realizing that Biggie had taken them for a run, Nina asked Biggie out loud why he had them all groomed. It was time to accumulate the records and win the Wager, which thanks to Teddy A, Nina, Miracle and BamBam Housemates narrowly secured during the last three of a nine-part challenge.

On the heels of the Wager win that came after successive flops, more than Diary Sessions it is counselling sessions Biggie held for Housemates. Riding on the wave of excitement, Housemates were cheerful in every way and let Biggie in more than expected. Nina and Cee-C had no intent to settle their conflict, which for now would remain muted yet palpable. Rico Swavey and Lolu admitted to getting closer to more Housemates, while Miracle regretted getting drunk and Teddy A was just feeling the vibe.

The rest of the night was all about Cee-C and Tobi trying to sort out their differences. They both agreed that they’re cool but Cee-C isn’t convinced. She spent most of her early night trying to fish out how she really feels but Tobi as he said is being careful and choosing what to respond to and how.

This morning the alarm rang and the Housemates are still under their blankets, it doesn’t look like they are going to go for their training session.

Toralex take the house by storm

Alex is definitely a guy’s girl, she can hold the company of men in a purely platonic way and enjoy it thoroughly. Today was a clear example of this when Alex her time with Tobi and Miracle. They spoke about everything from Rico’s failed attempts with Alex to how many messages they will receive when they turn their phones on. The three Housemates have also bonded in the past through Alex’s favorite pass time, dancing.

It was interesting to hear what the trio had to say about some of the Evicted Housemates, Tobi was very complimentary about Anto, saying that she was clear while Alex countered that statement and said she felt nothing when speaking with Anto.

Alex also added that she believed Vandora to be very calculating in the House and also commented that now that Leo has left, she feels 100% responsible for herself.

As per usual, the Housemates collected themselves and the bits and pieces of their concentration that had been scattered throughout the day. Seeing as Biggie has been throwing them in the deep with his skull cracking challenges, the Housemates’ expectations aligned accordingly and as expected, Biggies didn’t disappoint.

Tobi was the first to tackle the monstrous course that was apparently built to test just how far the Housemates had gone with their morning exercise sessions; this according to Biggie of course. With a time of 4:33, Tobi managed to tackle the bull and bring it down. Alex was fully geared up but clearly not well prepared for what lay ahead of her as the plastic balls seemed to have a mind of their own and ten pins were on a rebel tip. Just like Cee-C, she spent over a third of her time trying to knock the tenpins down. The two ladies unfortunately failed the challenge as their 10 minutes had elapsed.

The lifeless 5 challenge course seemed to have gone to gym and trained well because the Housemates were at receiving end of its fists. Rico Swavey also spent a considerable amount of time trying to polish his poor ball skills. Nina however came along and re-boosted the girls’ morale by completing the course despite not having had enough oxygen to set the balls in motion initially. It was expected that Teddy A and Lolu would bring their inner lions and try to devour the challenge, following 8 weeks of zero luck, but it seems like Teddy A’s big frame was not big enough for him to beat Miracle’s time of 4:27; but to everyone’s surprise, Lolu swept the floor clean and dumped the crumples onto Miracle’s lap, snatching the Million Naira dreams for himself.

Have you been watching? What did you think of the Day 54 activities?