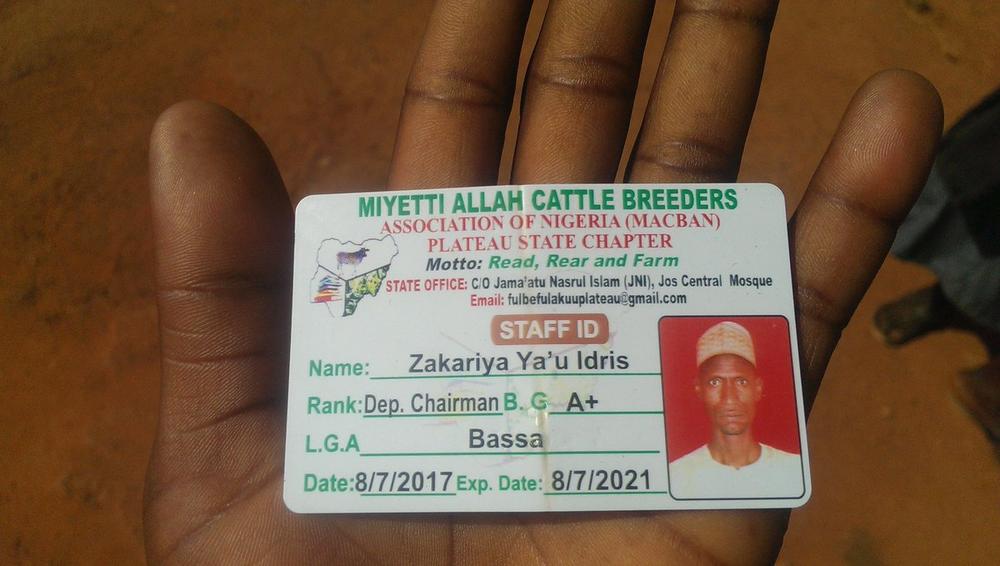 An identity card belonging to Zakariya Ya’u Idris, the deputy chairman of the Bassa Local Government Area of Plateau State faction of Miyetti Allah Cattle Breeders Association of Nigeria, was found at the scene of a bloody attack, Punch reports.

Suspected Fulani Herdsmen had staged an attack in Irigwe of the state, taking several lives.

Sunday Abdu, president of the Irigwe Development Association and a former state lawmaker, had said the ID card was found at the scene of the attack, along with mobile phones. He said:

The identity card was seen at the scene of an attack where people were killed.

The issue of identity cards is a small matter. We also recovered telephone handsets.

We have reported the matter to the Police and the items have been taken for investigation.

Chairman of the Miyetti Allah, Muhammad Nuru Abdullahi, has however said the ID card was stolen from Idris’ house. He said:

The owner of the ID card is the deputy chairman of MACBAN in Bassa LGA. He was chased out of his own house.

He left this document inside his own house, and they entered and picked it and then went away with it. The man was running for his life.

He has reported to the Police and the report has been documented.

Defense Minister says Nigeria is closing in on #DapchiGirls