Rapper Tyga is speaking out to address rumors about him possibly being the father of Kylie Jenner‘s baby girl Stormi.

Since Kylie welcomed her daughter, there have been endless theories saying Tyga ss the baby’s father because of the timeline of events.

The 28-year-old rapper dated Kyle for a few years before they split in April 2017, and Kylie got with another rapper, Travis Scottt and soon after got pregnant, hence the theories.

In his tweet, Tyga said: I’ve never said anything about someone else’s child or family insinuating my involvement; and will never do so. Please, Stop spreading false stories and attacking people’s families. I have nothing to do with any of that. People should be able to live in peace. 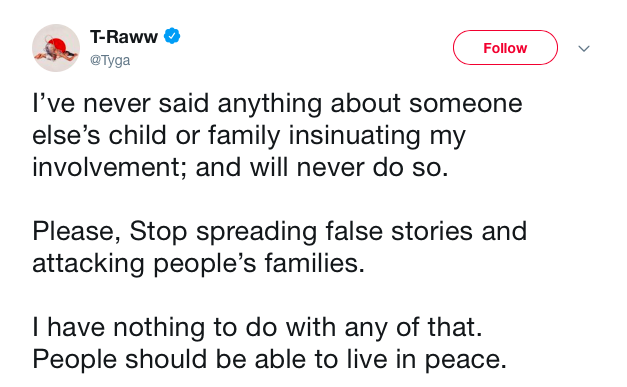