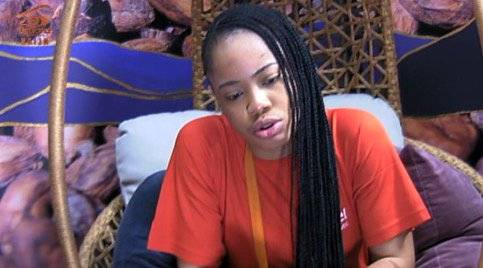 Did you watch day 72 of the Big Brother Naija 3 reality show?

Shakara is the silent teeth sucking that took place when open frenemies Alex and Cee-C were forced to sit together and find niceties about each other. While Alex complimented Cee-C’s dress style, she didn’t hide that she found Cee-C annoying and still likable. But when Cee-C’s turn came, she struggled to find nice things to tell Alex. Eventually she beat around the bush until she was inspired to say that Alex was ambitious and constant though young.

Wahala is trouble and Lolu saw trouble when he smothered Cee-C in praises for her confidence and quick study yet she wouldn’t bulge an inch. In response Cee-C appreciated Lolu’s humility and she said he fed her when they were paired up. Yet she didn’t seem to accept Lolu’s compliment that she had a good heart.

The Head of House, Alex had her moment with Miracle and couldn’t stop singing his and Tobi’s praises. As she’s lately been one of the trio, she told Miracle that what he and Tobi have is admirable and that she’s proud of their friendship. She also commended him on his will to succeed and never giving up.

On the other hand, Nina spoke of how a great friend Miracle is and encouraged him to keep growing. However, she also expressed how he doesn’t show emotions which makes it hard for anyone to know how he’s feeling.

For the first time this season Alex has been crowned Head of House, but assurances to do unto her as she has done to previous HOH’s have been sworn by other Housemates.

In her Diary Session, she told Biggie that she was shocked that she got the title, but more than anything was delighted that she survived the last Nomination of the season.

Straight after the crowning of the Head of House, the Housemates expressed their feelings towards the new HOH in their Diary Sessions and the common thread was that most were happy for Alex.

Meanwhile Cee-C spoke of how she does not really like the new HOH because she has drama and doesn’t understand it.

However, she went on to mention that she feels that there will be a lot of drama, issues and problems because people are ready to give Alex what she’s always given to other HOH’s.

Cee-C hit the nail right on the head as Miracle told Big Brother that he’s always wanted Alex to be HOH only because he wants a chance to do unto her as she’s done when he was HOH. The pestering and demands that came from Alex are what he wants to return.

The Housemates are almost on the final stretch and Tobi couldn’t hold back his joy at Alex’s win, which saw him escape yet another Eviction. Alex’ Immunity granted her the chance to Save one more person and it couldn’t have been anyone but Tobi as their alliance seems to be growing each day.

Lolu’s disappointment at getting this far and not having been able to win HOH didn’t hold him back from celebrating Alex’s victory. Also the ladies of the House, Anto, Nina and Khloe cheered for another lady winning and mentioned how good it feels when a lady wins the challenge.

Not so long ago Alex made a vow that no Housemate should sleep in the House when she’s awake and we’ve seen her pestering Miracle and Tobi when they were HOH. It will be interesting to see how she handles the pressures that come with the reins.

Nina also mentioned how she’s always wanted to see her in a leadership position.

Confusion in the Words

Nina’s struggle to articulate what she means has now got her worried that Miracle, whom she referred to as her “best friend in the House” during Sunday night’s Eviction Show, might have gotten the message wrong.

She told Alex that when Ebuka asked her what Miracle is to her, she didn’t know how or what kind of response he was looking for hence she opted for ‘best friend’.

Even though she explained to Miracle what a best friend is to her, she says she still feels like he doesn’t get what she means.

“To me, whenever I have a boyfriend I refer to him as my best friend” Nina told Alex.

Alex reassured her that any person who knows her will understand what she means because a boyfriend can be called a best friend and a brother.

The heart to heart between Nina and Alex was soon disturbed when Miracle wanted something from Alex and she couldn’t attend to him then.

Upon knowing what they were talking about, he decided to sit down and listen in, hoping to understand why Nina has revisited the issue.

In her defence, Nina replied that she wanted to hear what another person made of the issue, to which her in-House boyfriend said there’s no issue.

According to Nina, the uncertainty of what’s going to happen after Big Brother has her protecting what she knows.

Many times she’s made mention of ‘Collins’ whom she’s always referred to as her boyfriend and today she told Alex that as long as she’s inside the House she’ll keep protecting him even though she doesn’t know if he’ll be there when she leaves Biggie’s House.

The Big Brother House has seen some funny moments and obligations being met in their Airtel task this afternoon.

As part of Airtel’s CSR objective of touching lives, the Housemates are to provide an act of kindness towards others.

Divided in pairs, Biggie instructed the Head of House to choose four people she feels are natural leaders in the House. After they were chosen, they had to choose whom they feel were their least favorite Housemate.

However, with Biggie and his surprises, he cautioned the paired partners not to make it easy for their leaders and they have obliged.

Your wish, my command

The buzzer has been going off randomly and the paired followers have had their wishes granted and they seem to be enjoying every moment of being in the receiving end.

Notably, Khloe and Tobi have made the best of the requirements and the task is going easy for them. Tobi picked a card that required him to give her a massage and he did. Again, he picked another card that asked him to cook for her and she specifically asked for certain things, including cooking noodles on the Microwave which Tobi easily obliged.

For Lolu, it was rather a simple one but not so much because he has to tell his paired partner something nice and from the heart. He told Nina how he admires her for breaking out of her shell and standing her ground whenever she feels she’s under attack from other Housemates.

The task continue and more to be revealed as the night progresses.

The Miseries of Side Dishing

It took some time for Miracle to address the comments Nina made about him when she described him as her ‘best friend’ in response to a question from BBNaija Host Ebuka. Miracle has proven that he was not one to fire out in all directions, to the contrary he has come across as one to carefully assess all elements before deciding on a course of action. Yet this afternoon, during his Diary Session, and later to his confidantes Alex and Tobi, he made no secret of his disappointment in Nina’s poor judgement.

Who Am I to You

For Miracle, his relationship with Nina was what it was on screen and perhaps even more. He said his intentions were always clear and consistent, but he could not for the life of him, explain why would Nina keep him at a distance during the day only to sneak into his bed at night telling him sweet nothings. Miracle said he had to clarify this point with Nina, as he advised her to simply tell the truth and not chicken out from who they were.

At the start of the game, the chemistry between Nina and Miracle seemed to be authentic, even though they both on a number of occasion had dropped the names of special ones outside the House. And it’s only when Biggie unpaired them that after many pep talks, Nina started to come out of her shell and became more vocal. However in the past couple of weeks, perhaps sensing her imminent return into real life, she has increasingly been naming her boyfriend Collins and asked for his forgiveness in advance.

Show Me The Money

Housemates seem to have closed ranks and finally warmed up to each other when Biggie instructed them to show appreciation for each other.

Vulnerability at its Finest

During Diary Sessions, Biggie asked the remaining eight Housemates what they had learned about themselves from their teammates and the answers that came forth were quite revealing. Unpredictably, Khloe who was Voted back into the House, confessed to being moved to tears at the realization that she was loved to ‘that extent’. Equally surprising, Cee-C said she had discovered that people actually saw her for who she was, and that it felt like a burden had been lifted off her. While Tobi never suspected himself to be a ‘person of many talents’, he concurred to being a good listener, a quality he shared with Anto, whose authentic natural self was the most appreciated.

One for the Money Two for the Show

As this one in a lifetime adventure nears its end, Housemates wholeheartedly plunged into the Task, spending time and care crafting nice sentiments for their peers. Together with Miracle and Tobi, Alex wrote a touching poem to former Housemate Dee-One whose sense of humour had marked her the most. Likewise, Lolu penned a melodious ode for Bitto whose quirkiness was most missed in the House.

All Nice and Sweet

As pleasant and honeyed as Housemates lent themselves to this Task, one cannot help but wonder how many more of their buttons Biggie will push in the run-up to the ₦45 Million prize. The sweet smell of money is clearly on everyone’s mind.

Have you been watching? What did you think of the Day 72 activities?