One Conversation Was all It Took! Enjoy Tolulope & Brenon's Pre-wedding Shoot + Love Story 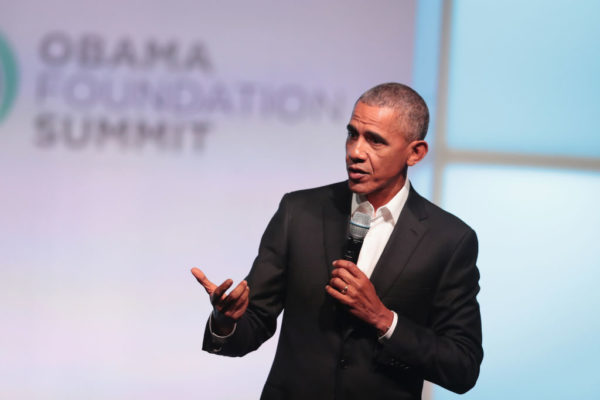 CHICAGO, IL – OCTOBER 31: Former president Barack Obama speaks at the inaugural Obama Foundation Summit on October 31, 2017 in Chicago, Illinois. The two-day event is scheduled to feature a mix of community leaders, politicians and artists exploring creative solutions to common problems, and experiencing art, technology, and music from around the world. (Photo by Scott Olson/Getty Images)

This one-year leadership development and civic engagement program will train and support 200 promising young leaders across Africa working in government, civil society, and the private sector. The Foundation received nearly 10,000 applications for 200 slots.

The Obama Foundation Leaders: Africa program will launch in Johannesburg, South Africa with a five-day convening. The convening will run from July 14 through July 18 and include plenary sessions, problem-solving workshops, and technical trainings that will help these young emerging leaders drive positive change throughout Africa. The convening will also include a town hall meeting with Barack Obama where he will hear about their experiences and the work they’re doing.

Following the South Africa convening, leaders will remain connected to the Foundation and one another via an online platform where they will engage in topical discussions, access leadership and training resources, and participate in trainings and webinars led by experts and industry leaders.

The individuals selected to participate in the Obama Foundation Leaders: Africa program will ultimately serve as the backbone of a larger ecosystem of Foundation changemakers across the continent and, eventually, the world, as the Foundation launches similar leadership programs in regions around the world.

“These remarkable individuals will be a part of our largest and most ambitious leadership group to date: the Obama Foundation Leaders: Africa,” said Bernadette Meehan. “In bringing together 200 young leaders from across Africa, we hope to begin a conversation about how each of us can create positive change in our communities. In addition, I am honored to continue my work with the Obama Foundation as Chief International Officer as we develop a robust international programming slate that helps the Foundation achieve its mission of inspiring and empowering the next generation of civic leaders.”

“The Obama Foundation Leaders: Africa program is a remarkable opportunity to connect with 200 exceptional young leaders across the continent,” said David Simas, CEO of the Obama Foundation. “Over the last year, Bernadette and her team have met with hundreds of emerging leaders around the world to identify ways for the Obama Foundation to amplify the outstanding work being done in these leaders’ communities. As our Chief International Officer, she will play an integral role developing the strategic vision that will guide our international programming and continue to be a key part of our team.”