From tasting Over 300 Wine Types to Meeting People from all Over the World, Wana Udobang shares her Prowein 2018 Experience 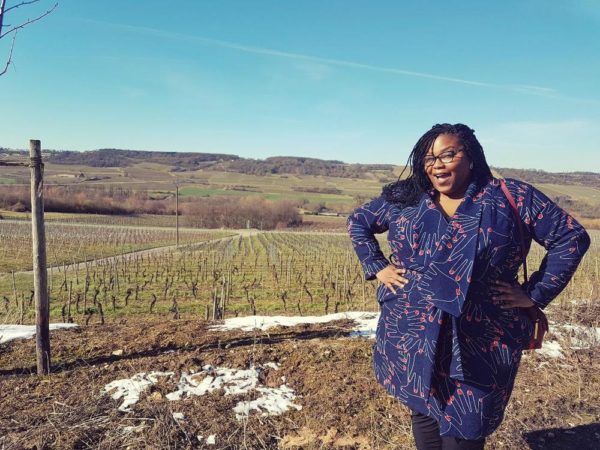 If you are a not so casual wine drinker like myself who enjoys a good tipple and tends to stick to a full-bodied cabernet sauvignon because you remember the epic hangover and vomit fest from your university days drinking three bottles of cheap white wine in one seating, it is easy to wonder what business you have attending the number one most distinguished and biggest wine trade fair in the world. Well, even if I wasn’t versed in the world of wines, sommeliers and viticulture, I was prepped with an open mind, a ready palette and that good old Nigerian spirit of enjoyment. Because of course who knows ‘faaji’ and ‘ariya’ like we do. However, when I checked into the hotel which just happened to be a ship called The Oscar Wilde, I knew my ProWein adventure was off to a great start.

This year’s ProWein in Dusseldorf boasted over 6,800 exhibitors from 64 countries with over 60,000 visitors to boot. Beyond the successful attendance and hundreds of thousands of cartons of wines ordered, what this also tells you is that if you are a fitness enthusiast, you will certainly hit your step count trotting through the halls of the Messe Dusseldorf.  But jokes aside, in ProWein, wine business is serious business. In the words the Messe Dusseldorf’s Managing Director Hans Werner Reinhard, he says “whoever has made their passion for wines and spirits their profession simply cannot afford to miss ProWein”. Imagine, importers, restaurateurs, hoteliers, wine farmers, magazine editors and enthusiasts all in the same space. The networking is on an overdrive and English is also a desired spoken medium. Dusseldorf is also an important connecting hub to other cities and just about an hour from London making ProWein a must-see for many wine lovers.

If you are a novice like me, it can be a little daunting once you arrive at ProWein because you aren’t quite sure where to start but in little to no time, you will create a plan. Think about it like a wine buffet. For me, I started with some Italian wine from the Romagna region before getting sucked into the wines of Bordeaux, Toulouse and Galliac by Anton. I tried their Tarani Sauvignon blanc which was flowery and fragrant and a nice easy entry level wine for the newly initiated before moving on to his Astronomie Cabernet. A rich, earthy, full-bodied red wine itching to be accompanied by some steak or game. But the star of the show was their Sang Mele red made with seven different grapes. There was just something rich with flavours bursting and tingling.

Anton explained that the region sits between the Mediterranean and the Atlantic so the humidity helps the maturation process for the grapes keeping it fresh and full of flavour. Then I and Kenyan wine blogger Jean Wandemi checked out the Castel stand who also have operations with their beer breweries in Gabon and other francophone countries. We were told that they ferment their grapes in a concrete tank which makes it easier to control the temperature adding more minerality and freshness to their wine. 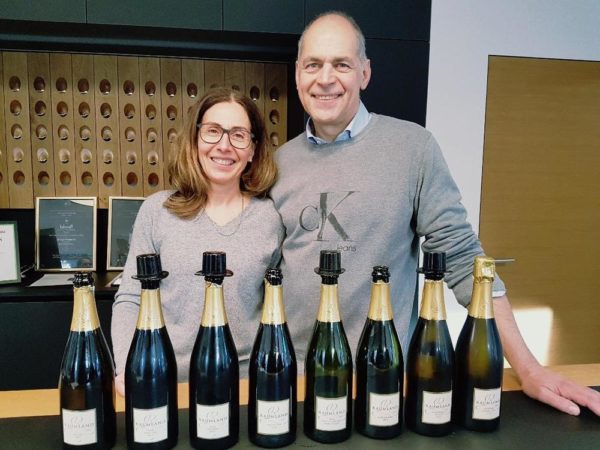 The thing about ProWein is that even though you attend having some pre-scheduled appointments or you are there to explore wines from other regions like Hungary, New Zealand or Chile, give yourself some room for some spontaneous detours along the way. This was how I met Sofie and Melody and discovered their German Reisling from Riquewihr. A town with 700 people near Strasburg. The region where the grapes are grown is quite dry which makes it very aromatic. Riesling is a very German thing but I am still wondering how I only discovered it in 2018. The Dopff et Irion Reisling was a little sweet, not too acidic and just all round yummy in the mouth.

Whilst wine tasting, you will hear a lot about the soil, the atmospheric temperatures and the overall climate of the regions where the grapes are grown. It is because grapes are pretty much like sponges. These elements have a huge influence on how they taste, how they are manipulated and the final product of course which is the wine. 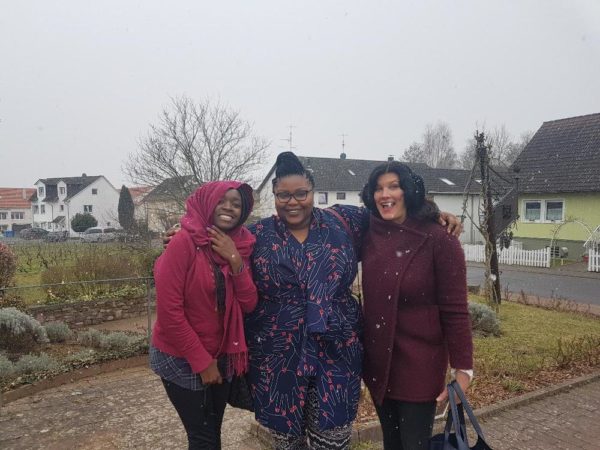 My day two at ProWein was dedicated to checking out a few spirits as well as my other favourite thing; Cider. Then I found Dan Kelly Irish Cider still made as though it was brewed in their backyard. I tried one made from a variety of apples and the other from a single apple. The Kellys are fifth generation apple growers. The charm in their cider was that it wasn’t too sweet and that is because they only use fresh apple juice for sweetness. It also wasn’t too fizzy or frothy which makes you want to drink so much more of it.

There was also Sassy Cider from a Normandy family orchard. Sassy is trying to give their cider a contemporary glow up with its semblance to alochopops as cider is often seen as a little old-fashioned. Then I found myself drawn to the St Laurent gin table. I have never been a gin drinker but if gin always tastes like this then I am sold. Their gin is brewed with Juniper berries and seaweed adding a slight saltiness and ease to the warmth of the gin. I was pleasantly surprised to not have a scalding throat afterwards.

The champagne lounge is also a huge attraction at the fair, with its white carpet and pyrotechnics, everyone always makes a stop and let’s be honest who rejects free champers. Proseco and sparkling wines are another growing trends, so I peeped the Pommery booth sampling a variety of their bottles on display. Beyond the plethora of wines and spirits on offer at ProWein, is also the work and effort that goes into the architecture and design of each booth and its display. The aesthetic of each booth is as important as the booze itself giving it that part wine fair and part design show feeling. 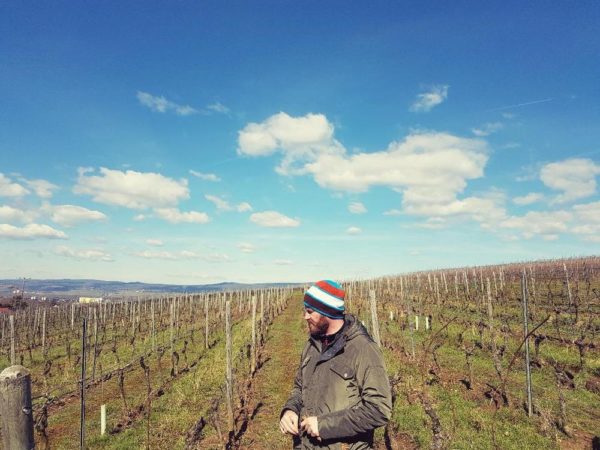 Thanks to Wines Of Germany, we embarked on a press tour of the Nahe, Rheinhessen, Appenhein and Ingelheim regions touring vineyards, wineries and tasting a myriad of Reislings and German Pino Noir. 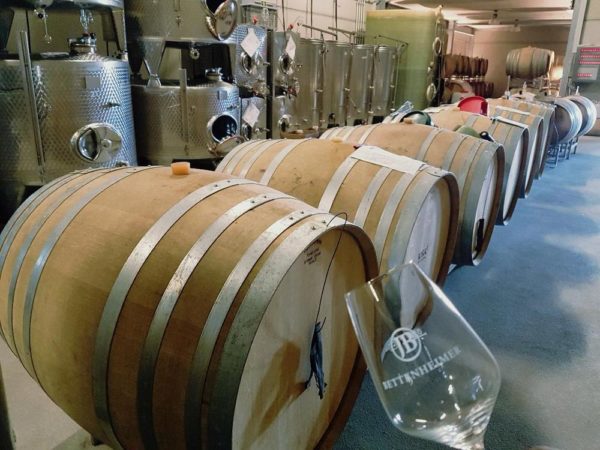 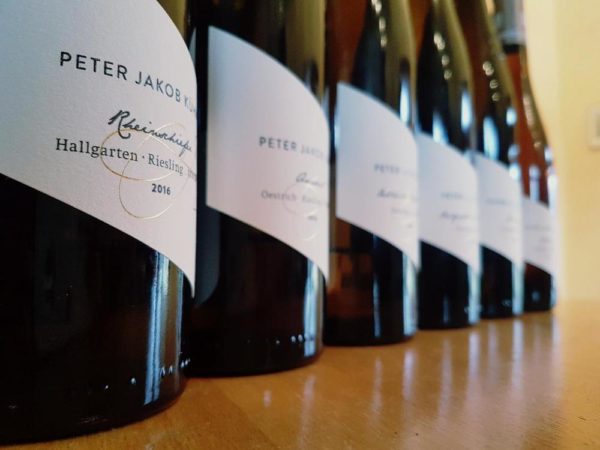 If I wasn’t doing what I currently do, my secret ambition would have been interior architecture and design. Even though I possess none of the skills necessary, I never hesitate to bask and appreciate a good space when I am thrown into one. We stayed at the Wasem hotel with its clean and minimalist interiors. It had clean lines but yet not clinical. I suppose it’s that German efficiency reflected in their buildings.

We also had a delicious dinner of beetroot capaccio with goats cheese, steak and mash and some frozen cream with raspberry coulie for desert whilst tasting an assortment of Reisling, Pino Blanc and Pino Noir. 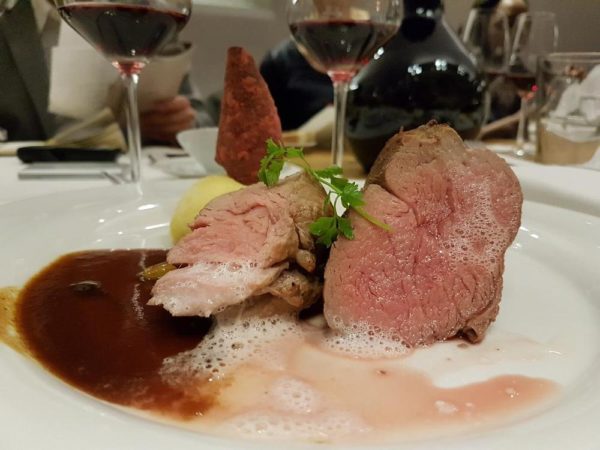 So this is where I have to shout out my new appreciation for Pino Noir or Spatburguner as the Germans call it. It is a versatile grape and we were told that if you harvest the grapes too early or too late it can affect the acidity and the taste. But I have to say, that medium body freshness makes you want to consume way more than your daily recommended allowance.

A lot of the wines in these regions are very drinkable and the slate, chalk, red sandstone and sometimes limestone composition in the soil have a huge influence on the taste and flavours of their wines. Many of the wineries are family owned, so for many it is heritage, history and tradition all rolled into one.

ProWein was a phenomenal experience. Learning about the cultures of wines and spirits, what kinds of meals to peer them with, meeting lots of interesting people, travelling the wine regions and tasting over 300 different wines. One of the things I didn’t get a chance to do was discover Georgian wine. I had heard that they had a century-long history of winemaking and I was eager to devour as much knowledge as the wine itself. But guess what? There is always ProWein 2019. 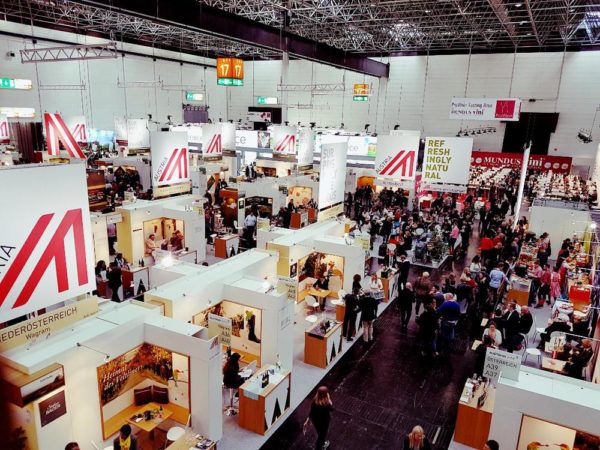 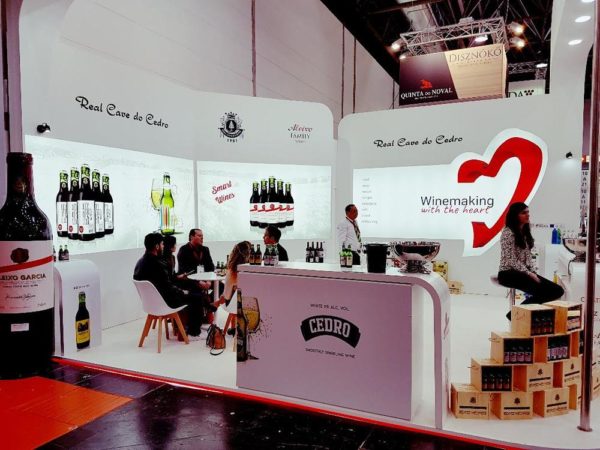