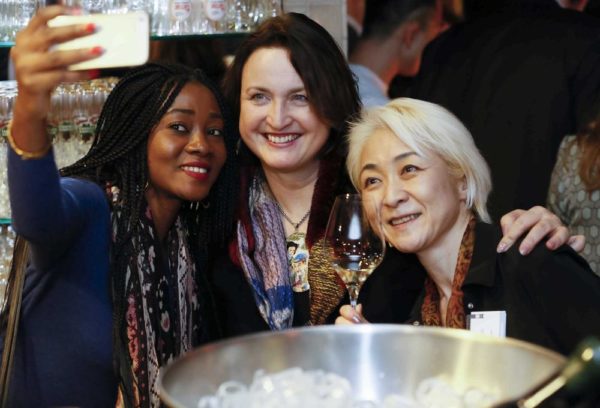 Toward the end of March, I had the pleasure of attending the annual ProWein International Trade Fair in Dusseldorf, Germany’s seventh most populous city, courtesy of Trade Fair Services Nigeria and Messe Dusseldorf as an acknowledgment of the fast changing lifestyle of middle-class Nigerians. Although Nigerians still love their beer, there is no doubt there is a shift in taste and more people are into wines and cocktails.

ProWein is acclaimed the number one wines and spirits trade event in the world and this is not a common brag. It may not be the largest, as Vinitaly boasts of a bigger fair ground and visitors, but ProWein is unquestionably big – with over 6500 exhibitors from 60 countries recorded at this edition, impressive and a perfect entry into the wine world. Even more perfect for anyone looking to do business directly with top producers and distributors in the global wine industry.

Hans Werner Reinhard, Managing Director of Messe Düsseldorf, summed up the success of the trade fair in the statement released after the 2017 show. “ProWein is an incredibly intensive trade fair. For three days very concentrated and effective business goes on here. Visitors particularly include key players – important importers and representatives from large international commercial chains. Again this year the sector showed how strong and capable it is. An extremely high number of orders were placed and a great deal of new business ideas were discussed.” 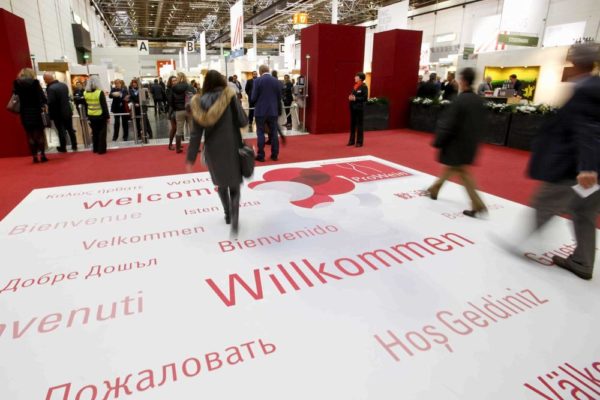 According to the same official statement, the main exhibitors came from Italy (1600), France (1500) and Germany (1,000), while Spain, Austria, and Portugal combined made a sizeable number of 600 exhibitors. The remaining numbers were exhibitors from Greece, overseas regions such as South Africa, Napa Valley, Chile, Argentina, California and the spirits section. 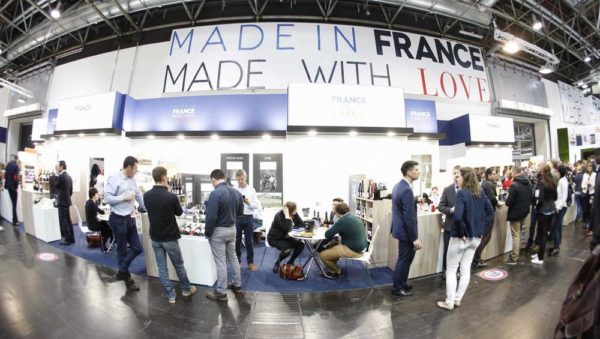 As a first time visitor, nothing prepared me for the challenge and excitement of the 3 days event. Not the overwhelming experiences from attending big art fairs and biennials, not my effort studying wine fairs ahead of the trip and definitely not the few evenings of special wine tasting in Lagos nor my knowledge of fine living and gastronomy. The saying, if you do not visit other people’s farm, you would think that your father’s farm is the biggest, made more sense when I saw capacity of the fair. The experience was totally different. 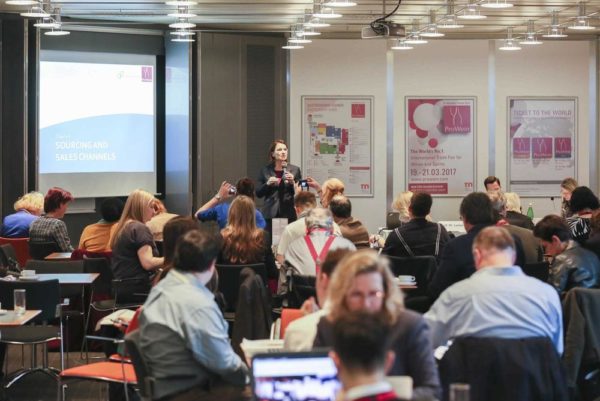 Each day, I kicked off my tour and activities from the south entrance of the fair ground which held the cloakroom, ProWein Tasting Area by Mundus Vini and the Austrian pavilion. Since I was not at the fair for trade purposes, I focused more on the happenings on my list and as advised than attempting to see everything in the 9 expansive halls in less than 72 hours. My first main stop was at one of the French Pavilion tagged From France with Love, and my wine tasting and conversations with vintners began. Although I was in search of the Champagne Lounge which was a hall and several stands away, I settled for discovering unfamiliar wine brands and people watching to fill the evening. Swirling, sniffing, sipping and occasionally smacking my lips, I refreshed my memory of acquired wine tasting techniques. 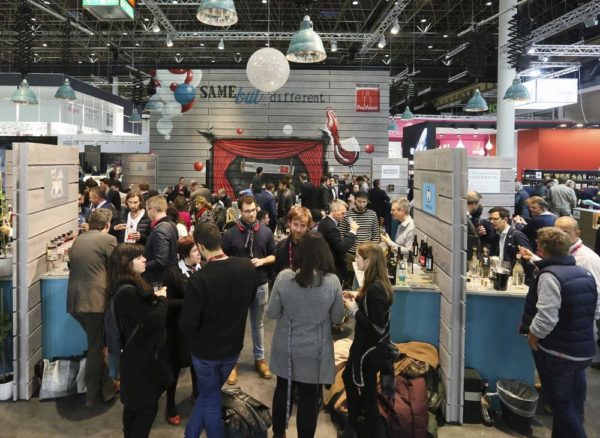 In that French hall, I found Bernard Remy Champagne stand. There, I got into a conversation with a sommelier and her wine distributor husband on sparklers. The conversation was more a snobby comparison of champagne and prosecco, as cava was not mentioned once. I love prosecco, but obviously, she does not. For me, prosecco is good enough sparkling wine and affordable. I mean a very good prosecco spumante. For her, it is what you drink when you cannot afford champagne, which is the only good sparkling wine. I agree champagne is top class and special, but can we drink prosecco in peace? And for the record, at the ProWein newsstand the third day, I found a report by The Times paper in the UK breaking the news of a rise in the consumption of prosecco in Britain following the slump of the almighty pound after the EU referendum in 2016. United Kingdom by the way is one of the top three sales market for wine and champagne producers in the world, so I am happy to be ahead of time in their rising taste.

During the sparkler conversation, myself and the sommelier tasted four varieties of Bernard Remy Champagne and we both, thankfully, settled for the brut rosé and moved on to other stands.

The highlight of day one came at the evening reception hosted by VDP
Prädiatsweingüter (the oldest association of German Wine Estates) for selected members of the press, wine analysts and twelve producers from its 200 quality oriented German vintners.

The association acts as a quality control agency for wine producers who choose to become its member. They enforce commitment to strict quality standards from vineyard to bottle. The presence of their logo on a wine bottle is a promise of quality. The meet-the-producers reception was a precursor to the 3days wine estates tour in the Ahr and Rheinhessen regions to taste the best wines of Germany and visit vineyards.

I engaged some of the wine producers and tasted their wines. Two wine brands stood out and one of them is Hans Wirsching Iphöfer Julius-Echter-Berg Silverner GG 2014. The wine estate was represented by Andrea Wirsching, a 15th generation winemaker from Iphofen and current manager of the Hans Wirsching Winery. Bold, confident and lively, Andrea marketed her best product to the press without difficulty.

The GG on the bottle is VDP’s classification sign for the highest quality of wine produced in Germany by its members. In 2016, the British magazine Decanter awarded the same wine “Best German Dry White over £15” and described it as “…an outstanding Sylvaner with admirable structure and length.” I could not have agreed more.

One of the allure of following wine making is its roots in family and traditions. Often, the children of a winemaker become wine makers too and one of them will become the guardian of the family’s heritage and name. According to the stories shared on the wine tour some days later, these young winemakers who become the guardian of their heritage are also expected to increase the size of the estate, quality of wine and importantly, sales. Though it is unusual to meet a first generation winemaker in 2017, I met one in Bodenheim close to Frankfurt, Hans Oliver Spanier, owner of Battenfeld Spanier winery. He bought his first vineyard in 1993 under unusual circumstances while searching for the suitable terroir for biodynamic wine cultivation.

Day two at the fair was the most remarkable. A ProWein Business Report for 2017 delivered by Prof. Dr.Simone Loose of Hochschule Geisenheim University showed interesting data on current happenings and future projections for the global wine market using surveys on wine producers and marketers mostly in France, Italy, Germany, and Spain. A part of the survey made it known that economically attractive export markets for these top players are Asian and Scandinavian markets. Without disregarding the survey, I questioned if these producers are aware of the shifting lifestyle and new cultural landscape in Africa as well as the numbers in their favour, especially Nigeria. Dr. Loose also agrees with this and hope future surveys will reflect this new development while maintaining interest in African market will rise if the producers find the conditions of trade favourable and attractive. With a keen observation of the crowd at the fair and even among the reporters after the business report meeting, I saw a high number of Asians – Chinese, South Koreans, Japanese – were more present than I expected at a European wine fair. And it was indeed a sign of their expanding relationship with the European wine industry.

At the champagne Lounge, which was one of the highlights of the entire fair, I posed the question of market attractiveness to Taittinger’s export manager, Carlos de Ipanema, which he answered affirmatively with “We have plans to be more present in the Nigerian market. It is a market we find attractive and we hope to build a relationship with the country.” His response was not surprising but instead shows Taittinger, like Veuve Clicquot, is paying attention to the rise in finer palate and luxe lifestyle in Nigeria.

With luck on my side, I ran into a representative and co-founder of a Nigerian start-up drinks business seeking exclusive arrangements with international distributors to import affordable but very good quality wines into the country. The representative, Niyi Adeyemi, did not only find the Nigeria market potential great for the top brands but also attractive for the mid-level producers. “The wine and champagne market in Nigeria is definitely attractive for any prospective distributor or supplier. As we all know, Nigeria has the largest consumption of Champagne in Africa and one of the most in the world. The recession hasn’t slowed this down, and with the number of clubs, bars and events that take place on a daily basis the opportunity are there for newcomers to enter the market. We tend to see brands like Moèt and Veuve but there is also an opportunity for the lower priced brands with good quality to enter the market and cater to the growing needs of the middle-class society. ProWein fair exhibits a number of brands that fit into this category and the opportunity remain to be tapped into.”

And in a brief exchange with ProWein director, Marius Berlemann, I also asked a similar question to gauge the fair’s understanding of the Nigerian
market. “We recognize a growing demand for wine in Nigeria surely driven by population growth, increase in the urban population and growth in the middle class. I think ProWein is the ideal platform for buyers from Nigeria to get an overview of what wine producers from all over the world are able to offer the market in Nigeria. ProWein is also the best opportunity to get in contact with important market players for networking, setting up business contacts and matchmaking”, he says. As most forums were held simultaneously, attending all the talks was impossible. However, I made a stop at the Future of Chinese Wine talk and the Italian Wine Union conference on the current market risks and opportunities in the face of Brexit. Fun spots at fair (after the Champagne Lounge of course) were SAME but different which served mainly Dusseldorf local beer Schumacher brewed by 22years old Peter Trosdorff, the fizz lounge, and the hall 18 street food park with free wifi.

Are you Ready for Asa Live in Lagos Encore? It’s 6 Days Away!

Let’s Dance for a Cause at the Zumbathon Charity Event to Support & Raise Awareness for Autism | Saturday, April 29th