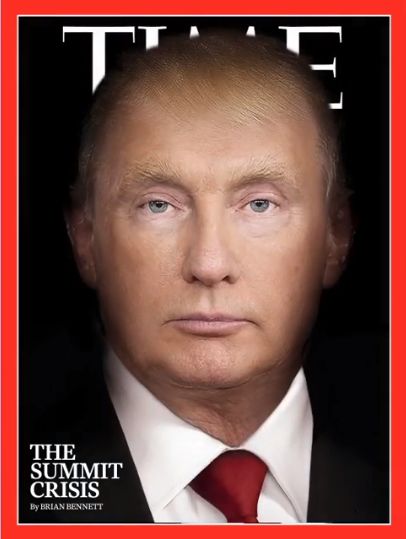 The cover of TIME Magazine‘s latest issue is a morphed image of U.S President Donald Trump and his Russian counterpart Vladimir Putin.

The cover story discusses the Helsinki Summit between the two presidents and Trump’s comment after being asked who he believed between the U.S lawmakers, intelligence community, and Putin on whether Russia interfered in the 2016 presidential election.

President Trump had said: “I have confidence in both parties,” he said. “I have great confidence in my intelligence people, but I will tell you that President Putin was extremely strong and powerful in his denial today.”

The composite image, by visual artist @nancyburson, is meant to represent this particular moment in U.S. foreign policy, following the pair’s recent meeting in Helsinki. As our senior White House correspondent writes in this week’s cover story: “A year and a half into his presidency, Trump’s puzzling affinity for #Putin has yet to be explained.

#Trump is bruised by the idea that Russian election meddling taints his victory, those close to him say, and can’t concede the fact that Russia did try to interfere in the election, regardless of whether it impacted the outcome. He views this problem entirely through a political lens, these people say, unable or unwilling to differentiate between the question of whether his campaign colluded with #Russia—which he denies—and the question of whether Russia attempted to influence the election.”

Burson, who became well known for developing a technique to age faces, which is used by the FBI to find missing children, says the goal of her latest composite is to help readers “stop and think” when it comes to similarities between the two leaders. “What my work has always been about is allowing people to see differently,” she tells TIME. “The combining of faces is a different way for people to see what they couldn’t see before.”

TIME’s cover story by Brian Bennett discusses the import of Trump’s statement at the summit. Read about it on TIME.

See the cover below:

Related Topics:Donald TrumpTIMEVladimir Putin
Up Next