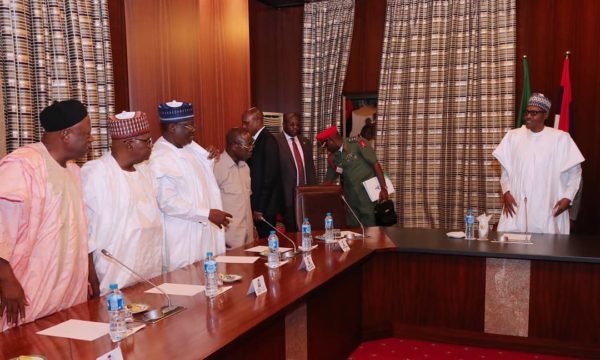 The national leader of the All Progressives Congress (APC), Adams Oshiomhole has asked the Senate President Bukola Saraki to step down from his position.

Punch reports that Oshiomhole said this after meeting with President Muhammadu Buhari and the APC members of the Senate at the State House, Abuja.

Saraki had on Tuesday announced that he was defecting from the APC.

Oshiomhole said it is a matter of honor for Saraki to “leave the crown in the house that the crown belongs to.”

The only thing is that there are other consequential issues that every man or woman of honour who had taken such decisions would be expected to follow through.

I mean, you should not collect a crown that belongs to a family and wear it on behalf of the family if for your personal reasons which he has enumerated that he has gone to another family.

It is just a matter of honour to leave the crown in the house that the crown belongs to.

As it stands even now, APC is still the largest party in the Senate. We have 53 senators, that is much more than PDP or APGA has.

President Buhari to begin Holiday in London for 10 Working Days