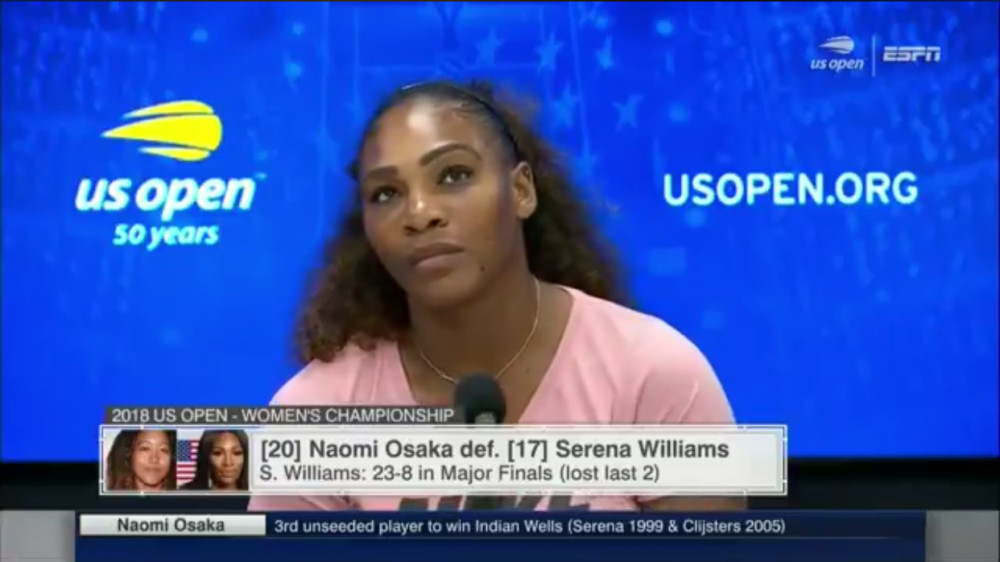 It has been a very emotional night for fans of star tennis player Serena Williams after losing to 20-year-old Naomi Osaka at the final of the US Open.

As the internet continues to react to the penalty that sealed Williams’ defeat tonight and the role the game’s umpire Carlos Ramos played in it, Serena in a press conference has shared her thoughts.

When asked what she would have done differently, Serena said “I don’t know. You definitely can’t go back in time”, before going ahead to state that she felt the umpire’s move to fine her was ‘sexist’ and ‘outrageous’, especially as other male players, have gotten away with saying worse.

Serena added that she hopes her experience tonight is able to encourage other female players who wish to express their emotions to go ahead and do so and even though it did not work for her, she hopes it works for them.

Everyone should listen to this from Serena Williams. pic.twitter.com/TF03dhpq2P

Serena was penalized for a three code violation which included being illegally coached from the stands by her coach Patrick Mouratoglou, a  hand gesture by Mouratoglou and verbal abuse when she called Ramos a thief for taking a point from her game. Serena was filmed arguing heatedly with Ramos denying the violation and the penalty.

—Serena to the chair umpire after receiving a coaching violation pic.twitter.com/v6Q2GWYYOn

“You owe me an apology!”

Serena was fired up with the official in the final set of the US Open final. pic.twitter.com/r6RSbrirnV

Despite the loss and lash out during the game, Serena maintained her cool and even gave Osaka a comforting hug as the crowd booed as the youngster was unveiled the winner of the US Open. When asked to share her thoughts Serena called for fans to stop booing and allow a visibly shaken Osaka to enjoy her victory.