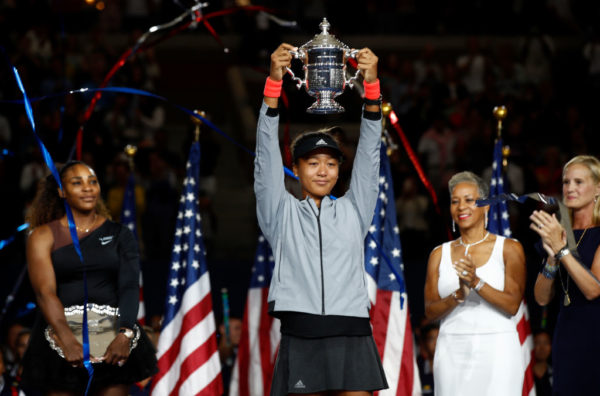 NEW YORK, NY – SEPTEMBER 08: Naomi Osaka of Japan poses with the championship trophy after winning the Women’s Singles finals match against Serena Williams of the United States on Day Thirteen of the 2018 US Open at the USTA Billie Jean King National Tennis Center on September 8, 2018 in the Flushing neighborhood of the Queens borough of New York City. (Photo by Julian Finney/Getty Images)

Naomi Osaka has become the first Japanese woman and also first Haitan to win the US Open after beating her idol Serena Williams.

Osaka’s first US Open win was, however, marred by controversy after Serena protested being penalized by the umpire.

First, she had been issued a warning after her coach, Patrick Mouratoglou, gestured to her. She told the umpire, Carlos Ramos, she “never cheats.”

More drama here!! @serenawilliams NOT taking any nonsense from the Umpire!!#USOpen pic.twitter.com/EwDd6rhT4j

A few games later, she got a point penalty after breaking her racket. She then called the umpire “a thief,” claiming he stole a point from her, and was given a game penalty afterward.

Serena called the game referee and supervisor, saying the penalty was not fair. She said:

Serena Williams after getting penalized because she called judge a "thief" "There;s a a lot of men who have said things and because they are men nothing happens to them"….pic.twitter.com/Vr9WTspqFw

Serena, after the match, urged the crowd to celebrate Osaka’s win as she played well.