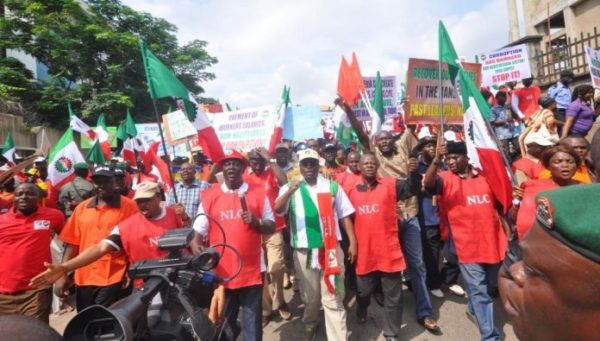 The Nigeria Labour Congress (NLC) will on Tuesday hold a nationwide protest in a bid to raise the minimum wage from ₦18,000 to ₦30,000.

Punch reports that the commission had through a statement released by its General Secretary, Peter Ozo-Eson, clarified that the protest does not translate to a strike action.

It has come to our attention that some sections of the news media have largely misrepresented our action plan in reaction to the delay in transmitting the recommendations of the Tripartite Committee on a new national minimum wage to the National Assembly by President Muhammadu Buhari.

It should be recalled that the National Executive Council of the NLC met on December 17 last year and directed that we hold nationwide mobilisation of workers and our allies if, by December 31, 2018, the bill on the national minimum wage has yet to be sent to the National Assembly to be passed as an Act of Parliament.

We immediately announced then that on Tuesday, January 8, 2019, there will be a nationwide mass mobilisation and protests simultaneously across all states in Nigeria. This does not translate to a strike.

The Cable: Borno Governor Shettima weeps over Boko Haram as he visits Buhari