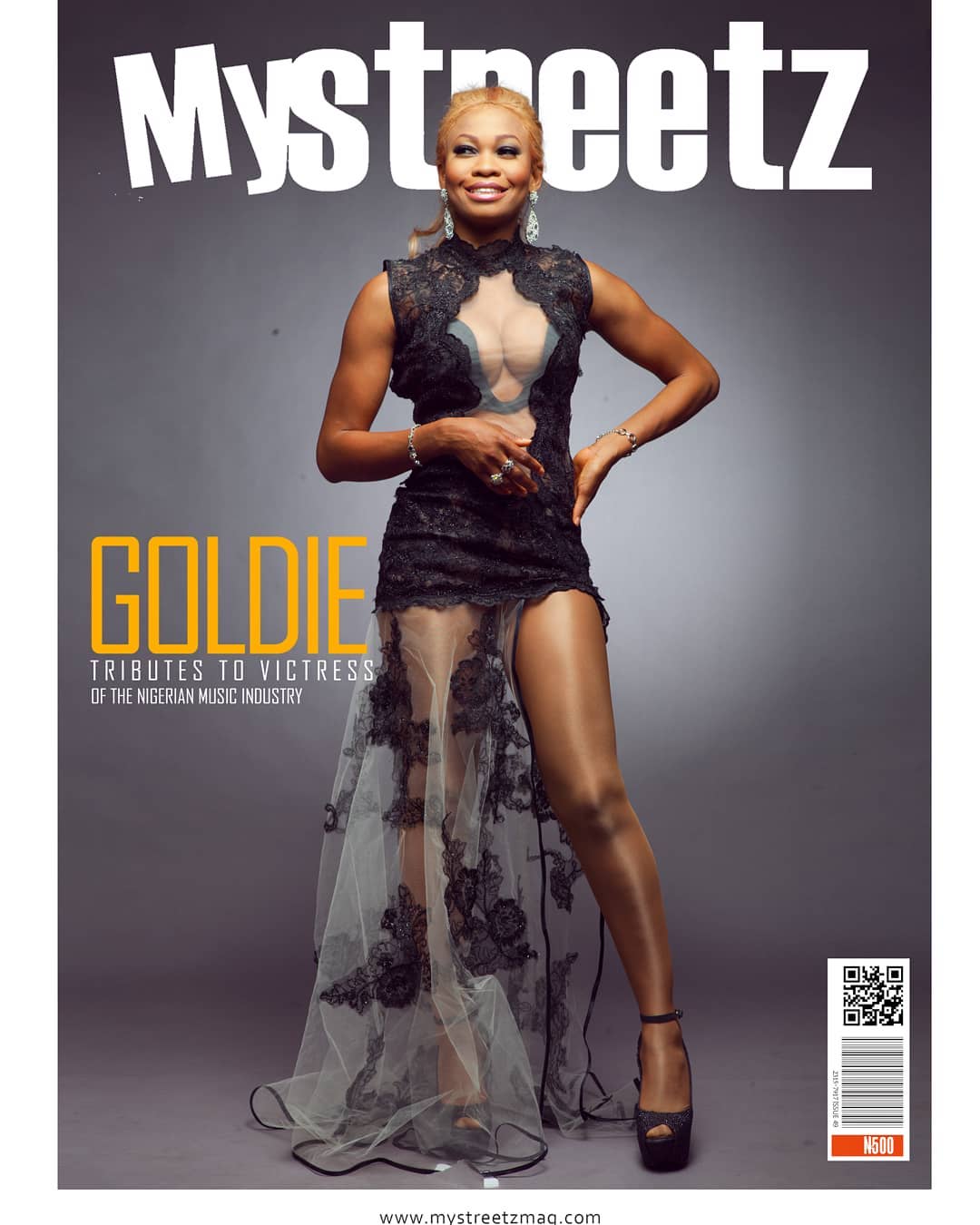 MyStreetz Magazine has released a new issue, and it is dedicated to late singer Goldie, 6 years after her death.

Despite her early death, with over ten musical awards that includes ‘Best Female Video’ and ‘Best Female Musician’ and also credited with hits singles like ‘You Know It’ and ‘Say My Name’ among others in an era where she was bullied in some quarters of the media, misunderstood and her talents unfairly evaluated, GOLDIE came, saw and conquered the Nigerian music industry with grits that made her one of the most iconic female pop performer of all time.

In celebration of the 6th year of passing away today 14th of February, we deliver this latest MYSTREETZ MAGAZINE COVER titled GOLDIE – Tributes To A Victress Of The Nigerian Music Industry.

Goldie’s best friend Denrele Edun, collaborator Eldee and photographer Clarence Peters also pay their tributes in the magazine. Here’s what they had to say: 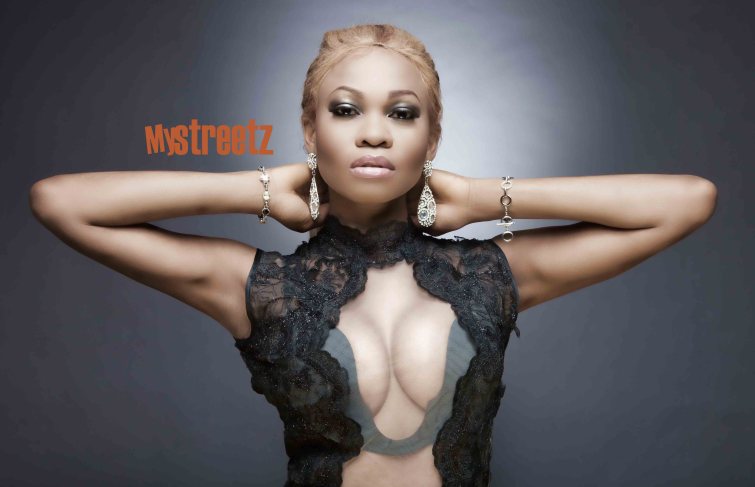 I actually did not remember exactly when I first met Goldie, what I do remember is that she was always very kind and friendly. I had met her a couple of times at events over the years and she was always very warm; so when Kenny Ogungbe reached out to me about possibly working with her, it was an easy decision for me.

I’m one who was always choosy about the artists I work with, not from the talent perspective but from energy standpoint. I don’t care then if your music wasn’t so great, if you had the right vibe and energy, I’d work with you. In the same vein, you can be Jay Z but if your energy is wrong, I’m out. Goldie was genuine; she had a positive aura to her.

I remember the first time she came over to vibe on the song; she spent half the time carrying my daughter Temi who was still a baby then. She came up with the concept of the song and she was trying to sell me on the idea because she thought I was a bit more conservative but soon found out that “emi gaan gangster ni mi”…(lol). I am somewhat conservative but I’ve always seen music as an art that should allow me to freely express without the need to conform to societal or moral standard. It’s all entertainment and as long as the audience understand that, we are good.

So she said she wanted to create a song about snatching someone’s man and I obliged. I made the beat and came up with the chorus, and then I wrote down the lyrics to both verses and begged her to follow my lead. She said, ElDee I came to you for a reason, just tell what to do and how you want me to do it. She was easy to work with because she understood the character I wanted for the delivery of her vocals. She was patient, and meticulous. Whenever I said, “we can use that take” she said No, let me try it again. She really wanted everything to be perfect. She was a true artist.

I didn’t think I was going to be devastated when she died. I went through the funeral and all maintaining my composure but I eventually broke down one night. I don’t think I’ve cried about many deaths in my life

The morning of every February 14th.

I wake up after a night of crying, that day of loss, and I have one moment…one beautiful, solitary moment when everything is right in the world. Because THAT is the moment before the moment when reality crashes into me like those trailers in the wrong lane speeding at me in a nightmare.

And I’m suddenly awake and without air.

It is close to impossible to breathe because I remember. And of all things I know in the world at that moment –I don’t want to remember.

My friend GOLDIE died 6 years ago on Valentine’s Day!

I started to write about her this morning, but found myself at such a loss.

For 36 hours, I’ve been struggling to find the right words to describe my friend – to tell you about her, to explain why this loss has always been so tragic. And, I can’t seem to find them. Any death of someone so young is a tremendous loss, I know.

How do I describe the most selfless person I know? How do I explain the multitude of ways she made me better, or how she never missed an opportunity to encourage me, tell me she loved me or supported what I was doing? How do I begin to recount the dozens of organizations she helped, the people she inspired, the lives she touched?

You were a treasure, my friend.

When I last wrote about GOLDIE, it inspired music from a stranger. That’s the kind of soul stirring she motivated.

She was THAT good.

I am better for having known this beautiful soul. I will always miss her.

I’m not sure how to do this. How can I try and describe someone so special in plain old words? And, how can I possibly sum up the feelings and memories I have for GOLDIE in one tribute? It’s almost impossible.

I’ve received so many messages this week and have heard from many people from many places saying “there are no words” – well, there are. There ARE words.

But maybe most of all there are words of strength, of hope, of power, of resilience and of tender love. Words that can bring us all together, to cross these choppy waters and come out the other side, better for it.

For me GOLDIE was a fiery spark full of love and determination. She was beautiful, smart, challenging, empathetic and encouraging. She always looked to grow; to better herself as a person and a professional. She was aware and spiritual.

She was a great listener with time for friends from all walks of life. She was as selfless as she was determined and left her mark on so many people. She was the best thing to happen to my life and strengthened me every day we spent together.

GOLDIE was from a certain mould of woman like so many of you reading this. She was like both our mothers, our sisters, our sisters in law, and many of our friends – a strong, positive and certain woman. No inch given but a powerful respect and warmth in every encounter. She was the powerful type of woman that we see challenging our society today and I deeply loved that about her.

I’m so scared of losing all those memories. I worry that as time passes my mind will shed those precious gifts. But I know that even if it does, she’s in a part of me that nobody can ever touch. There’s a Central Bank shaped compartment in my heart that will hold her ‘til the day I die.

GOLDIE inspired me, pushed me, supported me and helped me to grow. That growth won’t disappear – it just needs to lean on ME now, where it had leant on her previously…

So what would GOLDIE want from us today? Aside from more smiling…..

– A celebration of who she was and a sharing of our happy memories of her.
Let me leave you with a Roald Dahl quote.

“It doesn’t matter who you are or what you look like,
so long as somebody loves you”

So I’d like you all to know this; That I love you (Heck yeah, I have so much LOVE to give) and that GOLDIE loves you. And that sometimes, that LOVE is all we have and sometimes it is all that matters.

Goldie never came out to say she wanted to become the best vocalist; all she aimed for was to become one of the great performer in the music industry. In all my years as a cinematographer, when it comes to filming music videos, she was one of the most creative I have ever worked with. She always put in three months of work into planning her music videos. There’s no one at her level till date.

After deliberating ideas, she will come back with storyboard, locations and styling that’s always outside the norm. She’s not one to do the ordinary – her ideas are so great, at one point during a planned shoot, we had debates on how achievable all she had planned out. In terms of production, those were years where the thought of a female artist to go overboard is only for the insane. Goldie was a creative genius in her own rights. I miss her.

It’s so sad that most people did not truly know Goldie at all. She’s one of the well trained and groomed lady I have ever met. She’s that kind of girl you take home to you parents and before you know it, everyone falls in love with her. She’s so respectful and energetic. She was everything you want in a girl. In dealing with her, I learned how to handle female artistes during all my production process. With the available resources in the industry today, if Goldie was still alive, she would have created the unimaginable. It’s sad that most failed to understand her. She was magic.