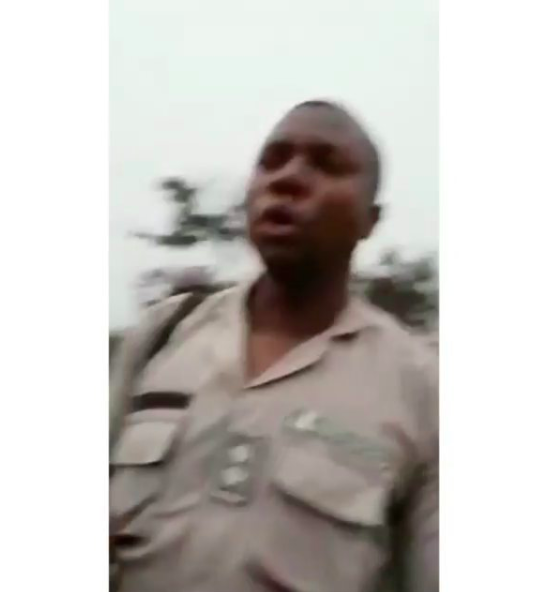 A viral video showing officials of the Nigeria Customs Service (NCS) who were accused of having killed an unarmed civilian at Shagamu interchange along Ijebu Ode has generated heated reactions against activities of the service online.

The video first emerged on Sunday, with a voice being heard saying they killed an unarmed passenger “because of N5000”.

In one version of the video, a passenger was heard warning an official not to touch his phone while he filmed the scene.

As the argument advanced, a voice was heard saying “shoot him” and a gunshot was heard almost immediately.

Then an official of the service approached the body and tried to lift the arm of the victim and realised the person had died.

The official then tried to get into the customs van, parked some metres away, but the passengers prevented him from getting in. At this stage, a lady was heard screaming in pidgin English that “Customs don kill person because of N5,000. Na abroad we dey come from.”

In another video, passengers were seen meting their anger on a customs official who sat helplessly on the ground, blood on some parts of his uniform and head.

The customs has since refuted this version of the story.

A statement by its spokesperson, Joseph Attah said the deceased was not a passenger of the bus, but a “friend” of the service who helped officials to fetch water.

“The attention of Nigeria Customs Service has been drawn to a disturbing video going viral with conflicting narratives,” the statement read.

“While it is painful and totally unnecessary to lose life in anti-smuggling operations, today at Shagamu interchange along Ijebu Ode, attempt to obstruct lawful performance of duty by passengers of a commercial bus (a white Toyota Hiace) suspected to be carrying bales of used clothing led to the death of a young man (Godwin) and serious injury of a Customs Officer, ASC1, Destiny Onebamho.

“Contrary to some narratives, the young man was not a passenger of the bus but a good citizen who always come to fetch water for Customs Patrol men anytime they return to the base.”

“Preliminary findings indicate that it was during the skirmishes and struggle to disarm the officer that the riffle discharged and the bullet hit the friend of the Customs, who lost his life,” Attah said.

However, in the video, the officer is seen cocking his gun and firing it.

Attah said the service has already commenced further investigation into the matter.

Listen to an eyewitness account of the incident posted on the customs official Facebook page Monday morning below:

Listen to this audio.

Customs’ official statement on the issue

Related Topics:5000 bribecustom kill man over 5000 bribveNigeria Customs
Up Next