Jordyn Woods bares it all on the Red Table Talk | WATCH 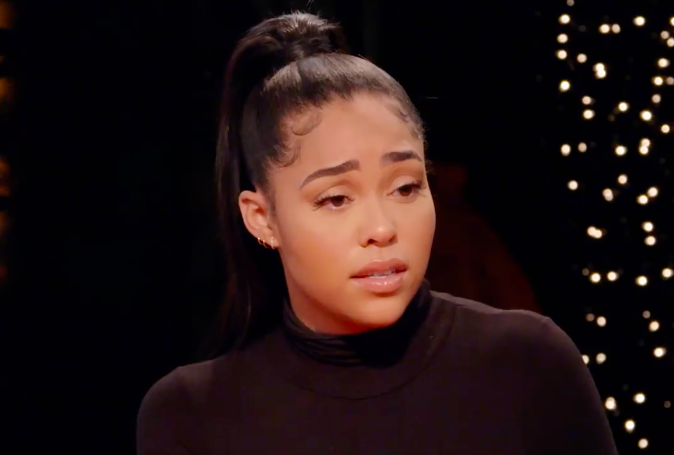 Jordyn Woods opens up at the Red Table Talk for an emotional first interview about the public scandal involving NBA Star Tristan Thompson, the father of Khloe Kardashian‘s daughter.

She was quick to put to bed rumours about her giving Tristan a lap dance saying:

Never once was I giving him a lap dance, making out with him, sitting all over him. Never once did we leave the public area, go to a bedroom, go to a bathroom. We’re all in plain sight.

Jordyn further says Tristan gave her a kiss on the lips but there was no passion in it and she does not think he did anything wrong. She said:

On the way out, he did kiss me. No passion. It was like a kiss on the lips, I don’t think he’s wrong either because I allowed myself to be in that position and when alcohol is involved, people make dumb moves or people get caught up in the moment.

I was like, that didn’t happen, I was leaving already so I walked out immediately after.

After getting in her car, Jordyn told herself,

When asked why Tristan would do that, Jordyn replied,

I’m there until the sun’s coming up, so he’s like, maybe let me just shoot my shot.

Jordyn admits she was not totally honest with the Kardashians, because she was trying to protect Khloe’s heart, but she insists that she did not sleep with Khloe’s baby daddy.

Jordyn Woods comes to The Red Table for an emotional first interview about the public scandal involving NBA Star Tristan Thompson, the father of Khloe Kardashian's daughter. She addresses the rumors and accusations. What really happened that night? It’s an RTT exclusive.