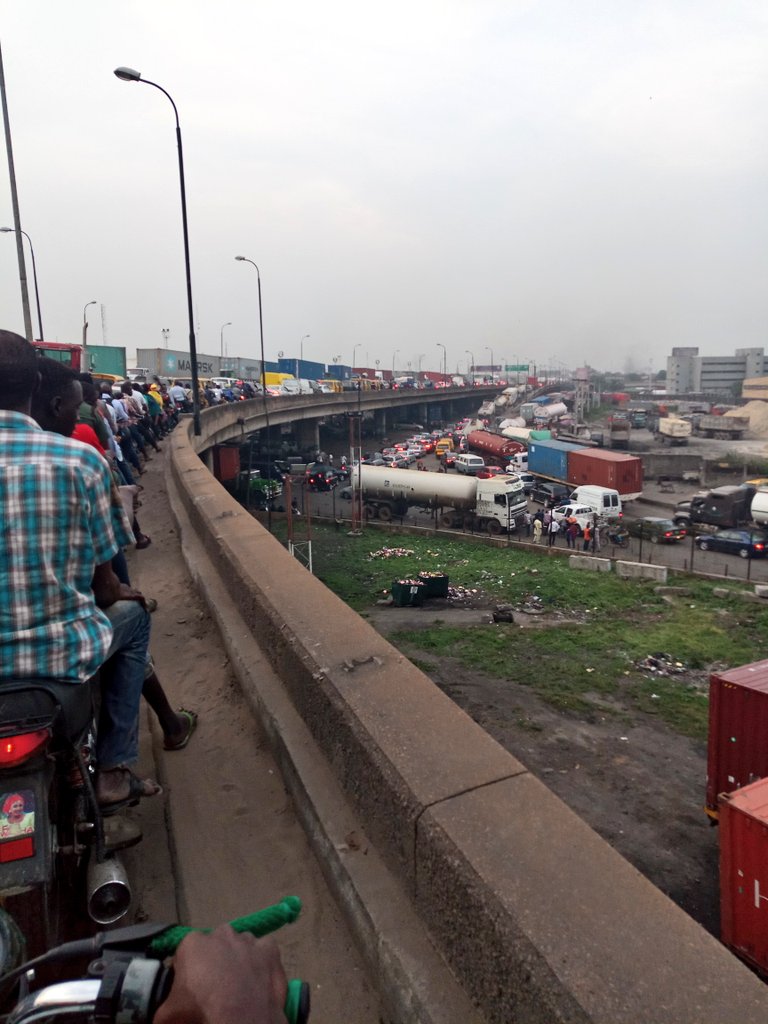 The Presidency has issued a directive for the “immediate clearing up of the Apapa gridlock and the restoration of law and order to Apapa and its environs within 2 weeks.”

This was made known in a series of tweets on Wednesday.

For years, residents of Apapa and its environs have lamented the gridlock caused by tankers and trailers parked on the roads/bridges and/or heading to the ports at Apapa. The gridlock intensified in the last 2 years.

See the presidential directive below:

NOTICE: A Presidential directive has been issued for the immediate clearing up of the Apapa gridlock and the restoration of law and order to Apapa and its environs within 2 weeks.

The directive mandates the immediate removal of all trucks from the bridges and roads within Apapa and all adjoining streets leading into the Apapa axis.

To facilitate this important assignment, operators of trucks and tankers have also been directed to vacate the Port Access Roads within the next 72 hours.

This directive follows an emergency meeting convened by President Muhammadu Buhari and chaired by Vice President Prof Yemi Osinbajo on the 25th of April, 2019.

The meeting proffered lasting solutions to the gridlock around the Lagos Ports, as the traffic congestion has continued to restrict all operations and livelihood in the area.

At the meeting were key heads and representatives of relevant Ministries, Departments and Agencies (MDAs) of government, including the Honourable Minister of @FMPWH, Mr. Babatunde Raji Fashola; Inspector General of @PoliceNG, Mr. Mohammed Adamu; […]

Consequently, a Presidential Taskforce, chaired by Vice President @ProfOsinbajo was established to restore law and order to the area within 2 weeks.

The Taskforce, which will report directly to the President, has included on its Terms of Reference the development of an efficient and effective management plan for the entire port area traffic, including the cargo, fuel distribution and business district traffic; …

It also includes the implementation of a workable Empty Container Return and Export Container Truck Handling Policy, amongst others.

Members of the taskforce include Mr. Kayode Opeifa, former Commissioner of Transport in Lagos State, as the Executive Vice Chairman; a representative of the Presidential Enabling Business Environment Council (PEBEC); @nigerianports, and the Nigerian Shippers’ Council (NSC).

Other members include a special unit of the @PoliceNG led by a Commissioner of Police, representatives of the Truck Transport Union, the Lagos State Government @followlasg through the Lagos State Traffic Management Authority (@followlastma), and other relevant MDAs.

The @NigerianNavy and all other military formations have also been mandated to withdraw from traffic management duties in and around the Apapa axis, while military and paramilitary checkpoints in front of the ports and environs are to be dismantled.

In addition, LASTMA @followlastma has been authorised to move into Apapa as the lead traffic management agency, while @nigerianports is to commence the immediate use of the Lilypond Terminal and Trailer Park A as a truck transit park.

The directive further mandates compliance by all security personnel and MDAs, while heads of @nigerianports, @CustomsNG, @FMPWH, and all other security operatives are to ensure their officers’ adherence to the new directives.

Related Topics:ApapaApapa Gridlock
Up Next