A new research report by Pew Research Center, has revealed that Nigeria ranks second out of 102 countries examined for frequency of prayer.

According to the report, about 95% of adults examined say they pray everyday.

“These findings are broadly aligned with other data that suggest that a country’s level of wealth is inversely proportional to its levels of religious commitment as measured by survey responses about daily prayer, belief in God, attendance at religious services and stated importance of religion in one’s life. In other words, people in poorer countries tend to be more religious than people in wealthier countries,” the report said. 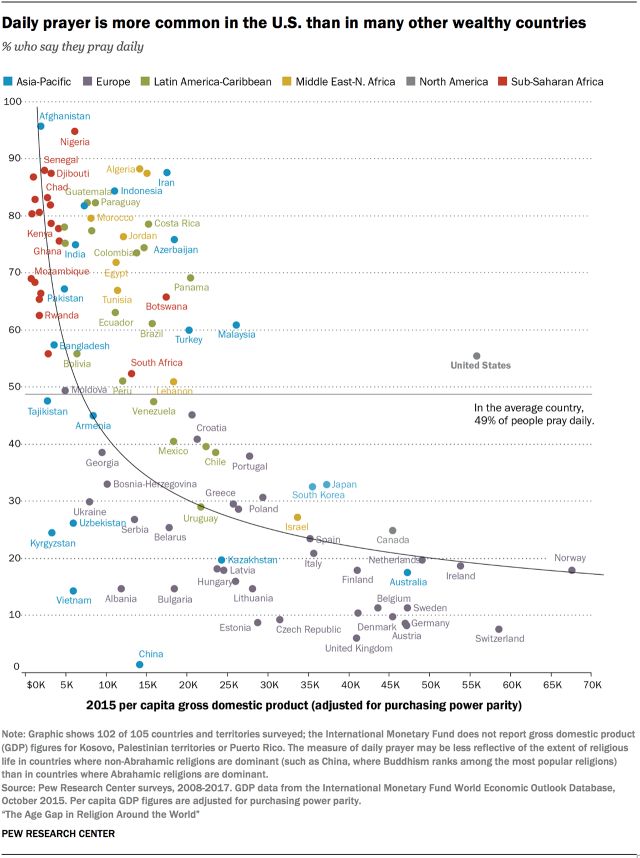 The report said that U.S is unique in that it has both a high level of wealth ($56,000 per-capita gross domestic product in 2015) and a high level of daily prayer among its population (55% according to the 2014 U.S. Religious Landscape Study).

Worthy of note is that, among all 102 countries examined, the national average share of people who say they pray daily is 49%.

The surveys did not include wealthy countries in the Arabian Peninsula, such as Qatar and the United Arab Emirates, which might be expected to have high levels of prayer.

In every other wealthy country surveyed – that is, those with a per-capita GDP over $30,000 – fewer than 40% of adults say they pray every day. For example, in Japan, where per-capita GDP is about $38,000, roughly a third (33%) pray daily. In Norway, where per-capita GDP is about $68,000, fewer than one-in-five adults (18%) do. (It’s worth noting that the surveys did not include wealthy countries in the Arabian Peninsula, such as Qatar and the United Arab Emirates, which might be expected to have high levels of prayer.)