#PastorStepDown: People are Asking Biodun Fatoyinbo of COZA to Step Down Amid Rape Allegations 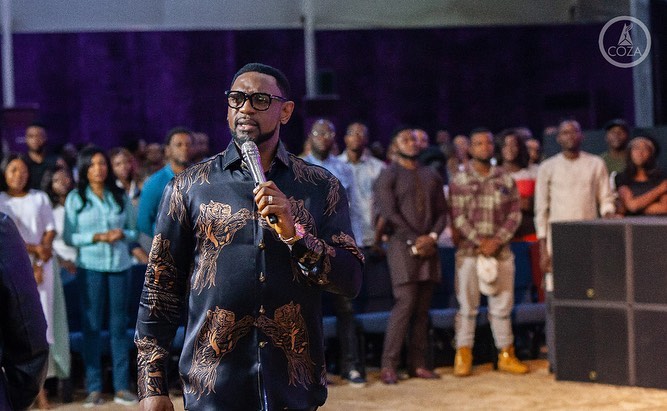 Amid the accusations of sexual abuse against Biodun Fatoyinbo, the Senior Pastor of Commonwealth of Zion Assembly (COZA), celebrities and other social media users are calling for him to step down.

Busola Dakolo had on Friday, narrated how Fatoyinbo allegedly raped her twice when she was 16.

Actor and YouTuber, who is a member of the church wrote on Instagram:

#PastorStepDown
I am calling on everyone to do the right thing. Use your voice. Use your platform. Gospel artists and pastors…. Speak out. Silence means you are also part of it.
For now, I will be retreating because I do not want to be in the centre of this. I am not fighting. And I don’t want the attention. I believe good people know what to do from here on. Let us still be respectful and also mind the words we use in this movement.
For those who feel lost, please don’t give up on your faith. Jesus is real. God is real and true. Just calm down. The body of Christ will still prevail.
We are not mad. Just do what is right. 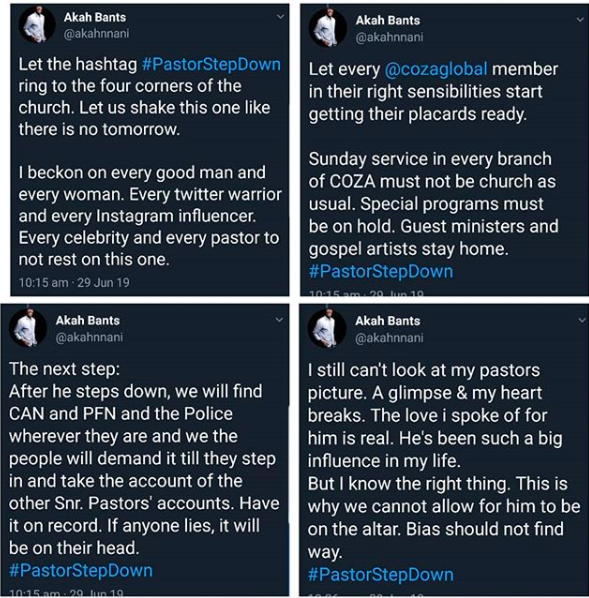 Till this issue is handled, till the law takes it's full course….there should be no sermon on that pulpit from him. No one is pointing fingers but what is right is right. #PastorStepDown

The honourable thing to do is to step down. No preaching, no guest ministering, no bamboozling of a congregation, no claims of being under attack. #PastorStepDown and let other people run the church until further notice.

It is important that other church leaders, pastors and gospel ministers take a stand PUBLICLY on this. You all have to encourage the right thing which is that he steps down until further notice. We need to know your values too, which is why it should be public. #PastorStepDown

Yes he is innocent until proven guilty, but it doesn’t change the fact all the women speaking of their ordeals are speaking their truth. He is also a custodian of morality, and a leader so we ACTUALLY hold him to higher standards. #PastorStepDown

Waking up this morning to DMs from past members/workers of COZA narrating their ordeals. They don’t know each other, 2 of them are strangers to me. Their stories are similar, some were lucky to get away some weren’t. Some were threatened by the church #PastorStepDown

How anyone is going to be able to sit and listen to him preach is beyond me tbh. What’s wrong with some of you people ?. #COZA #PastorStepDown #WeMeanStepTFDownInnocentOrNot pic.twitter.com/WESUFoJ8tL

If you spoke up against the COZA Pastor atrocities against women, your voice was not a waste.

For the FIRST time in about 20years of sexual abuse and manipulation, he openly responds to allegations.

For the first time, he feels threatened.

If by a great miracle Biodun Fatoyinbo steps down, if Important to note that Pastor Flo CAN NOT take over, he has been named by at least two women of knowing about his senior pastor's behaviour.
He's helped cover it up.

I join my voice to the many that demand that Pastor Abiodun steps down and clears his name before he mounts the pulpit to give another sermon… Enough is enough!#PastorStepDown