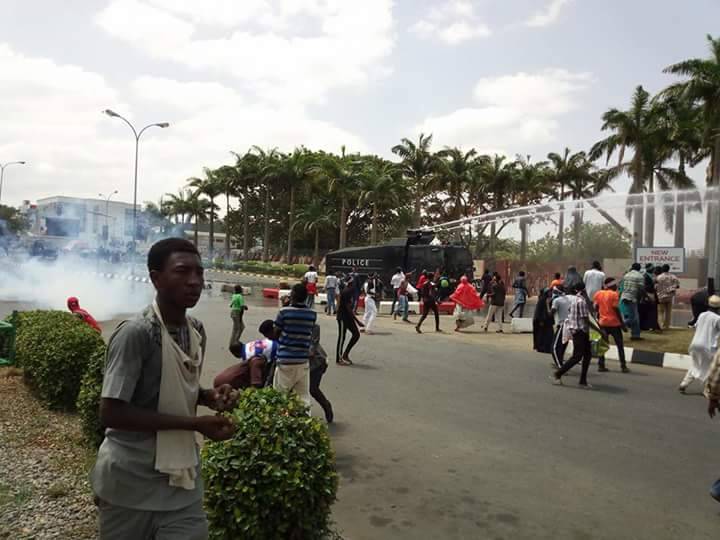 The Shiites became a national concern in April 2016, after news broke that officers of the Nigerian Army, in Kaduna, had murdered and conducted a secret burial of 347 members of the group. The killings were said to have taken place between December 12 – 14, when their leader Ibrahim El-Zakzaky was detained, with an acknowledgement made by a Kaduna government official. The High Court, in December 2016, ordered the release of El-Zakzaky, but the marches protesting his detainment had begun even long before then.

These protests by unarmed protesters almost always end in what the media describes as a “clash” between the protesters and security operatives, whether the army or the Nigeria Police Force.

It was reported on Monday, July 22, that at least six protesters, a Deputy Commissioner of Police, and a National Youth Service Corps member, Precious Owolabi, died after the peaceful protesters “clashed” with the Nigeria Police Force.

The Kaduna Government has tried to ban the Islamic Movement in Nigeria (IMN), but you can’t ban people from practising a religion because you don’t approve of it. The police has said it would charge the members of the movement with terrorism, but still they continue to exercise their right to march in protest.

And why do they protest? Because the government has continued to unlawfully detain their leader, whose release has been ordered by the court.

We know, in Nigeria, some lives are more precious than others. The lives of 347 Shiites did not matter. The lives of the dozens of the Shiites who continue to die at their protests do not matter. But now that a journalist, a corps member, a Nigerian youth, Precious Owolabi has lost his life, will it be enough for the government to do the right thing and release El-Zakzaky? Will Precious’ sacrifice be precious enough to stop security operatives from opening fire on innocent citizens?

Emma Uchendu: Get In Here to Learn How to Unlock Staff Loyalty in Your Small Business