From Emotional Wars to Rib-cracking Tweets, Catch the Highlights from #BBNaija Day 60

Part of the human condition involves dealing with emotionally challenging moments but in the Pepper Dem House, some are more difficult to deal with than others.

From losing Nomination Challenges to earning Strikes, the Housemates revealed to Biggie what they found emotionally draining in the Big Brother House.

We found it interesting hearing both Ike and Mercy confessed to Biggie that they find their relationship with each other challenging. Well, maybe not in the way you imagine. Although the couple spent the evening joking with each other under the duvet, they did not shy away from telling Biggie the different ways their relationship has drained them. Weird how they both had the same challenges and it didn’t seem like they planned their answers. If great minds think alike, what do they say about challenged minds?

While Mercy said her Task sessions with Ike has been emotionally challenging, Ike admitted that forming a relationship in the House has been draining for him. In addition, having to live in the same House with multiple personalities seems to be taking a toll on him but he’s found a way to manage such situations.

There’s no relationship without some flames and we reckon the Icy pair do not shy away from revealing theirs. 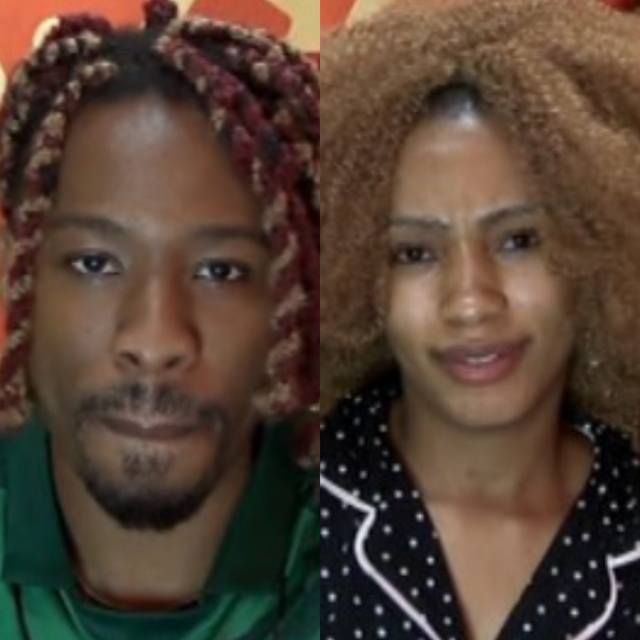 Like a prodigal child, Tacha opened up her Diary session with Biggie by asking for his forgiveness. Her second awarded Strike in the House opened up an emotional side of Tacha which she displayed as she fell on her knees and pleaded constantly. Big Brother was quick to get her off her feet as he told her he had forgiven her and it would be nice to see things evolve with her in the House.

With the heart of a repentant, Tacha promised to turn a new leaf and never disregard Biggie’s rules to avoid her dreams of staying till day ninety-nine cut short. Evidently, getting her second Strike was an emotionally draining moment for her in the House and she didn’t hide how it made her feel in her Diary Room revelations to Biggie. What should we expect from the resident Port-Harcourt queen? We’ll find out. 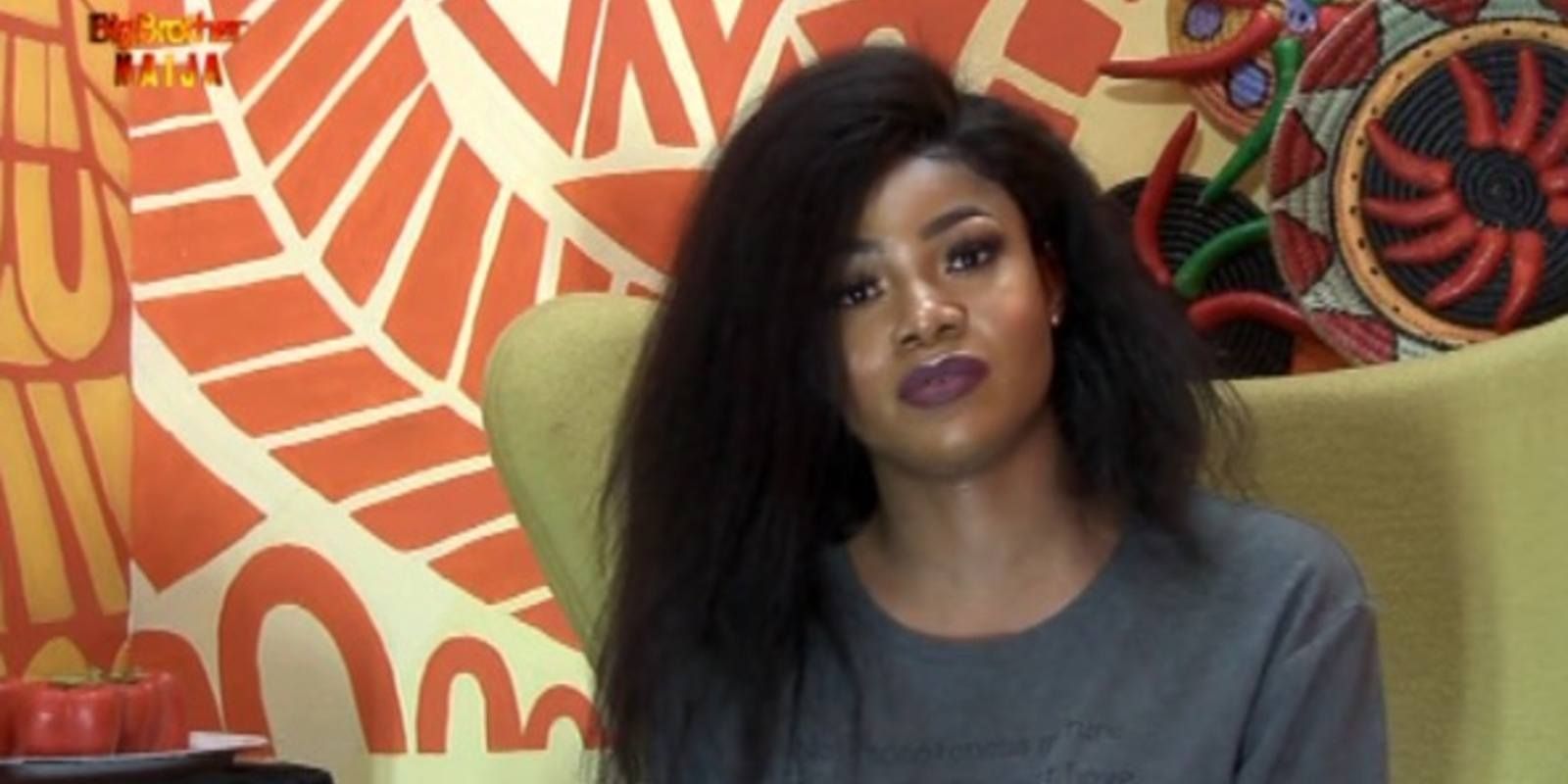 It has almost been a norm seeing Frodd exchange verbal insults with some Pepper Dem Gang members; either for food or well, for more food. What we did not know was that the Housemates he exchanged words with felt guilty for letting him take the better side of them. With this, we can’t help but wonder if they found their fight sessions with Frodd emotionally draining because of how guilty they felt or because Frodd has now become a resident fighter that shouldn’t be challenged, Whatever the case may be, eating is a common hobby the Housemates share and we don’t see the food fights ending soon. Or do you?

One thing Elozonam and Seyi agreed to after their Diary confessions is that the fights taught them a lot about staying in control even when upset. All thanks to teacher Frodd, lessons have been learnt. 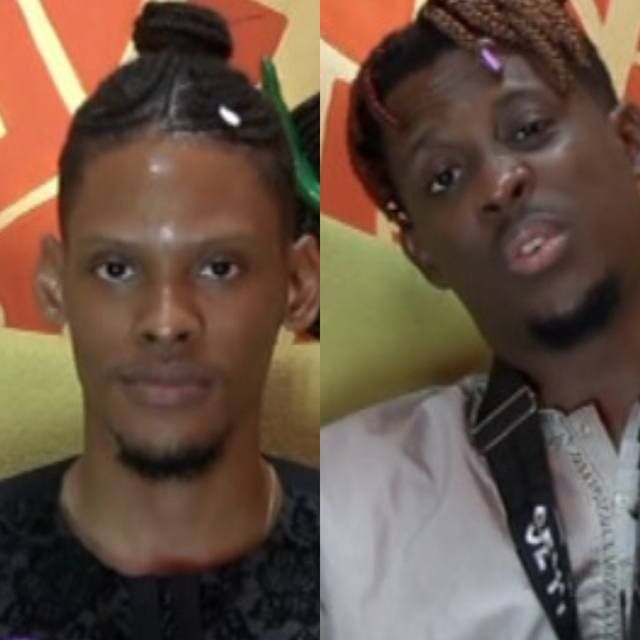 We never thought we would use the words “lover boy” for Omashola considering the fact that he’s pretty much the only single Pepper Dem Gang member, both inside and outside the House. However, hearing him admit to Biggie that every time he’s had to think about his ex has been emotionally wrecking for him, revealed a lot. One word, could Omashola still be in love?

This subject matter has brought the resident Warri lord in tears and tonight wasn’t any different. As he opened up to Biggie about the incident that led to losing his ex, he did not fail to admit that he hopes she’s waiting for him outside. We hope so too, Omashola.

In the same light, Seyi also revealed to Biggie that missing his ex is one of his emotionally draining moments in the House. We see you, lover boy. 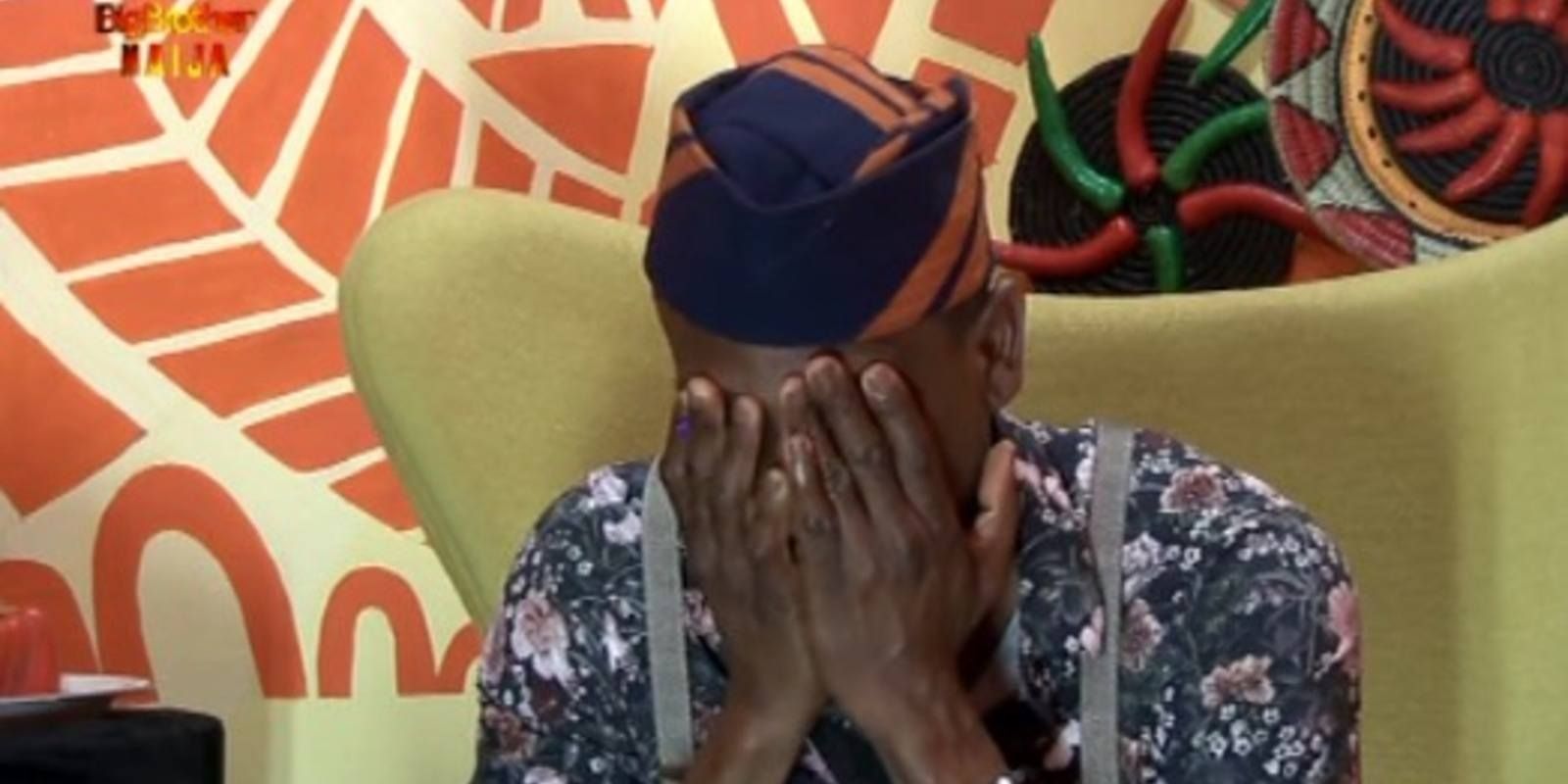 They might not have cried during the Diary revelations but hearing them tell Biggie about how bad they felt about certain Nomination Challenges in the House made us realize how bad it hurt them.

Interestingly, this led to tears from both Housemates during the incident.

Esther told Biggie about how Cruisetopia’s Wager loss on her birthday dealt with her emotionally, while Sir Dee explained his sadness about losing the Nomination Challenge for The Icons. 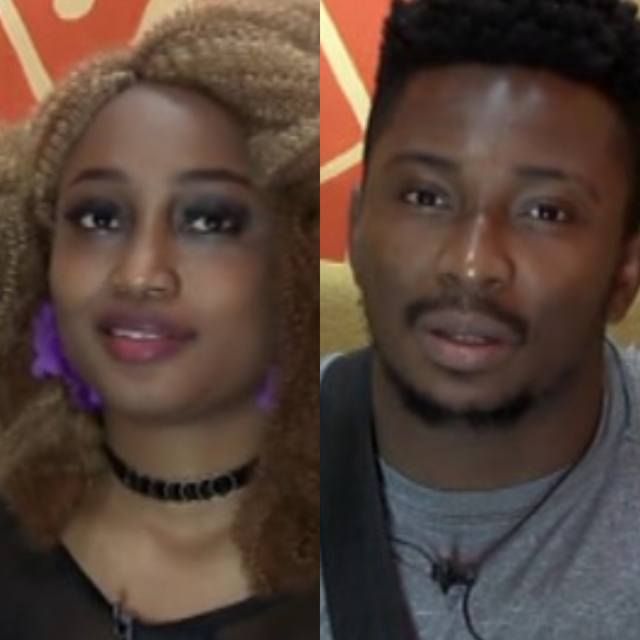 One word for the Housemates? Stay positive and learn from the difficult times in Biggie’s House. In the meantime, we hope they put these challenging moments behind them and enjoy the Pepper Dem ride.

High Hopes
Khafi had a little one on one session with Diane and gave a little insight about her dating experiences. Turns out Khafi had been single for almost two years and also had to deal with pressure from family to settle down. Meeting and finally dating Gedoni for her, was the best choice because it felt safe and right. Although she still worried about Gedon’s jubilant reaction after being Evicted, she chose to believe he was happy for this experience and not because he was leaving her. 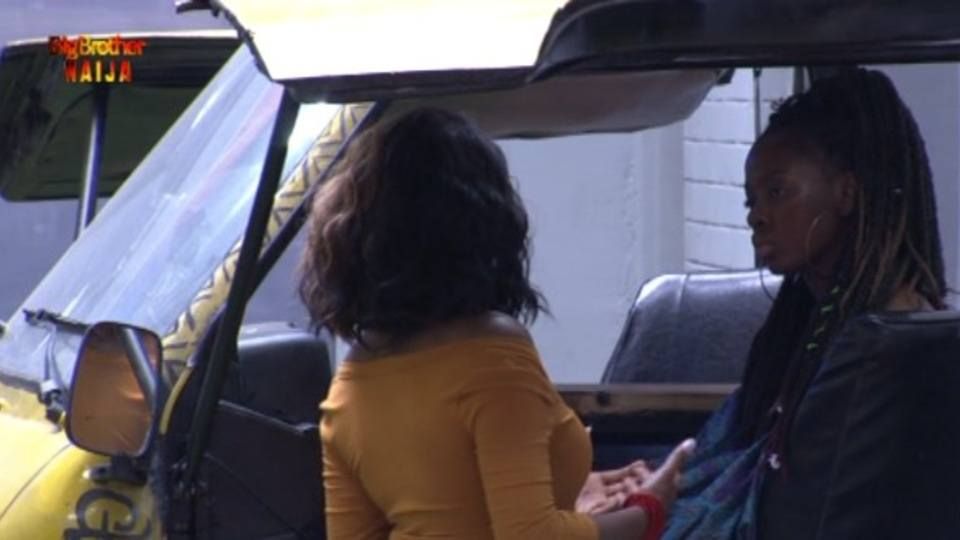 Possible Case of Entitlement?
Still hurt Ike saved Omashola instead of him during the Nomination Challenge, Frodd confronted Ike again. One would think Frodd would have long forgotten about the issue but he kept berating Ike for putting money before the friendship they both shared in the House. This got us wondering; did they really have any major connection or this is just a show of entitlement on Frodd’s part? Ike remarked, “It’s not that I don’t value friendship, I just decided to make the VPH badge beneficial to me.” 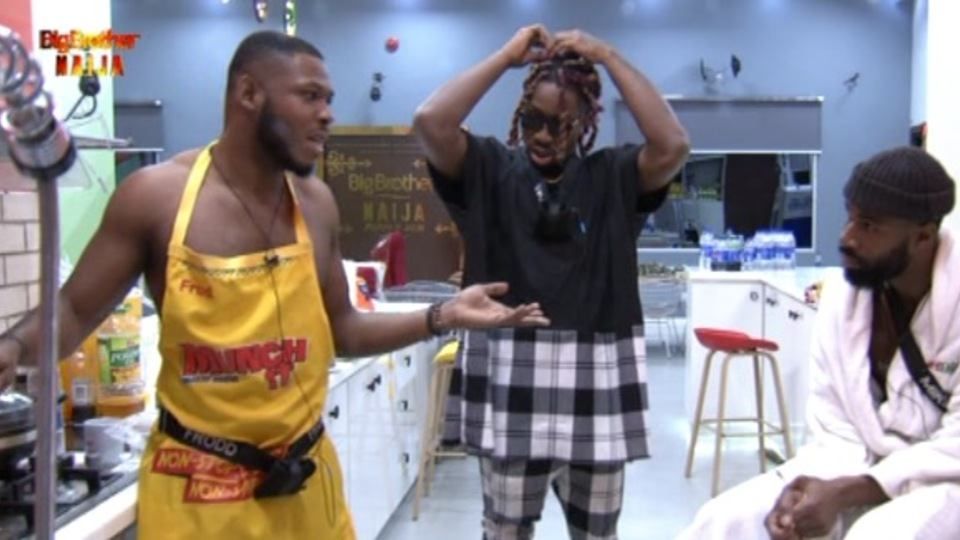 Mike obviously irked by Frodd bickering on this issue, cited the instance Frodd put up Mercy for Eviction to which Frodd responded that he didn’t know anyone at that time and Mercy’s name was the only one that came to mind and she previously made it clear to him that she had no worries about being put up for Eviction. Do you buy his excuse?

Wager Warm-Up
As usual, the Housemates have a Wager Task to win and each other to compete against. The celebration of the diversity of the World’s Cultures isn’t as easy Task as both Team Legends and Enigma have come to realise. Assigning roles and deciding which culture to reenact were the first tasks they had to overcome.

The Task may be about celebration, but the spirit of competition is high between the two teams. Which team will snag victory and enjoy shopping luxury this weekend? We wait with bated breaths.

Ten Tweets That Made Us Laugh

Tweeps love to have fun when it comes to the Pepper Dem Housemates and we are up for it.

The Association of Twitter users is never asleep when it comes to hot topics or juicy moments that happened in the Big Brother Naija House. Why don’t we take a look at some of the tweets that made us laugh?

Let’s Begin with ‘Kayode our cameraman.’

Yes, we know how you feel about Kayode when he doesn’t show your favourite Housemates. These tweets say it all.

That conversation Seyi and Tacha are having over there looks important and life altering.

And that time Frodd finally got a taste of Esther’s lips and was transported into another realm.

So, Esther and Frodd kissed for nothing? #BBnaija #DarlingBBNaijaTask pic.twitter.com/BpgxOb4AVd

When Esther and Frodd kissed on runway.
Me: #BBNaija pic.twitter.com/ply9RspxE9

Then the Dialo ship happened

Elozonam: Will you be my queen?
Diane: ofcourse my love.

My sister: wake up!!! time to get ready for work. #BBNaija #Dialo pic.twitter.com/xdUIM3kJMe

In less than 30mins I’ve seen tweets about Diane and Elo not speaking to each other and Diane and Elo making up. I’m stressed! #bbnaija #dialo pic.twitter.com/te06YP4BlF

What of Frodd and Elozonam quarrel?

This Frodd vs Elozonam fight is long overdue actually.. ??it has been brewing since ????and it’s not over #BBNaija pic.twitter.com/ssuvueNASY

-Ike fights, Mercy is there to calm him

-Elozonam just had a argument, Diane was there to calm him

-Frodd gets in a fight, aunty Esther becomes a mute and fold her hands??
Aunty, that’s your man fighting or he is not?? #BBNaija pic.twitter.com/sLWxczlmCb

Ike and Mercy in that HOH room is what we need

Mercy and Ike will not kill me this night
“You gat to win HOH for me, we gatta be in that room”

They are cracking me up like crazy #Bbnaija pic.twitter.com/5dFjld5V2N

Keep up the energy guys!

For putting up a colourful display of different world’s cultures, Team Enigma has won this week’s Wager.

This week in the Big Brother Naija House is about Celebrating World Culture and in line with this, the Pepper Dem Gang brought their best to the Thursday Night Presentation with their colourful displays. Each team was judged based on adherence to theme, clarity of presentation and quality. At the end of the Performance, Team Enigma emerged winner of the Wager Task.

Time To Travel The World

With limited props and the freedom to be as imaginative as possible, the teams took us on a trip to different countries in the world.

The Presentation started with Team Enigma and they came on stage with a beautiful drama about the Igbo culture. After Mercy and Cindy collected money from their husbands (Ike and Mike) for their ‘August meeting abada’, the team took us to Turkey, Japan, Jamaica, China, Barbados and landing finally in the United States of America. It was an interesting display of cultures from this team and we loved every moment of it. Did you see that Cindy’s sumo slide? For real that wasn’t part of the plan. 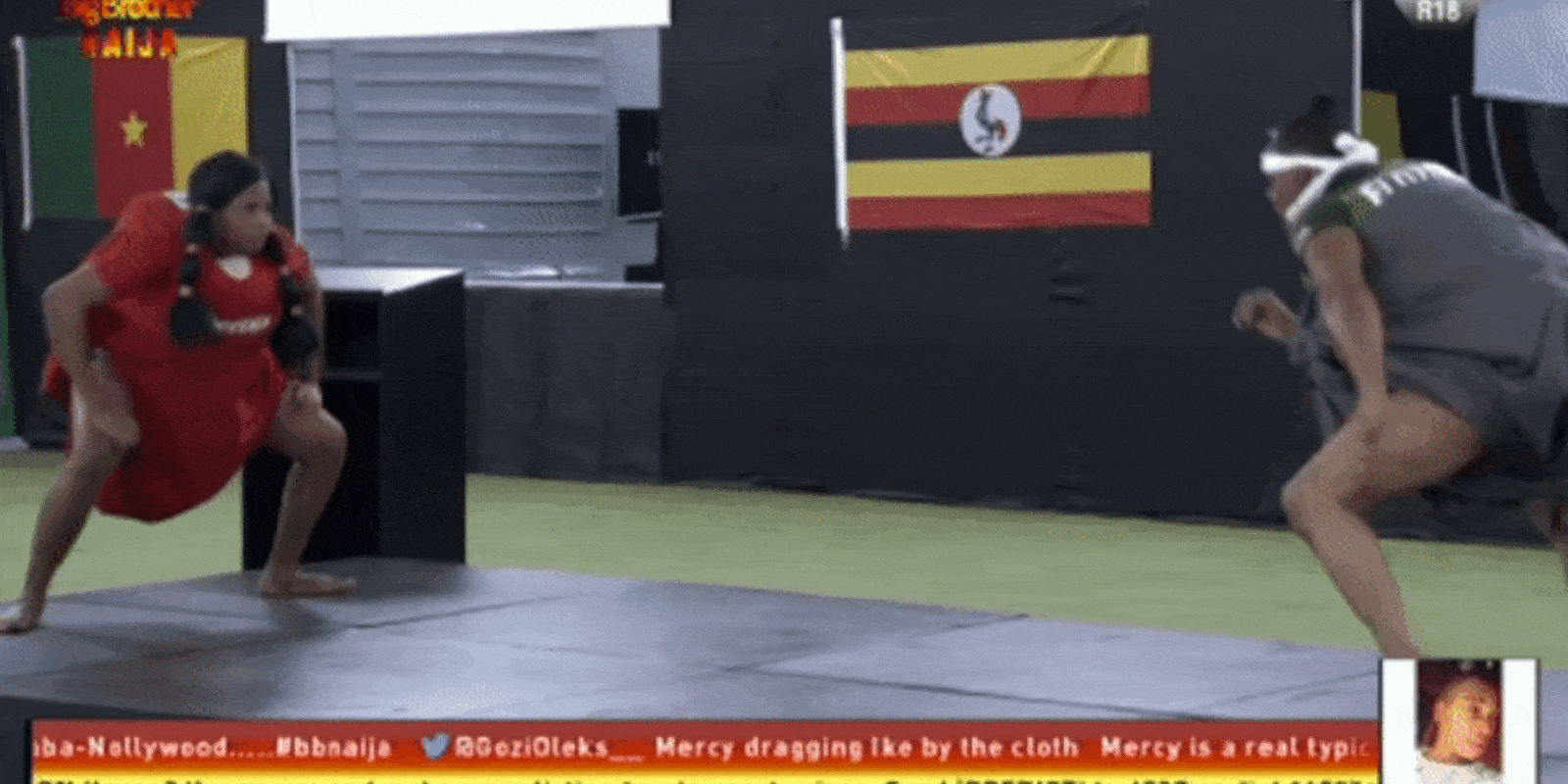 Team Legends in a bid to outdo the Performance of Team Enigma took us on a legendary journey across the world. With their cultural exhibitions, we were taken to China, South Africa, Rivers state, Benue, London, Paris, Argentina and India. Phew! Quite a lot of countries. We hope you guys didn’t experience so much jet lag. 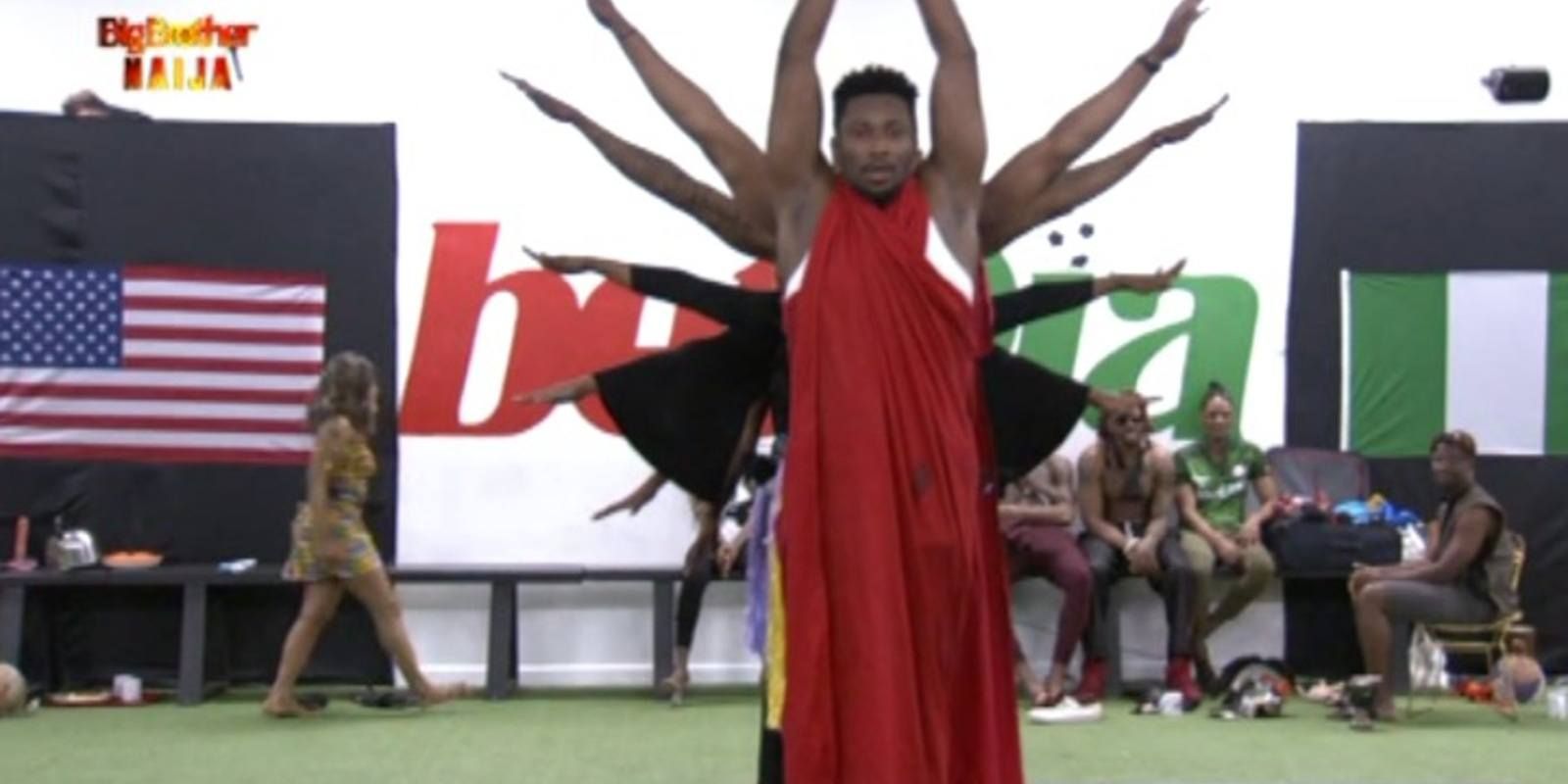 Biggie really? Well, Big Brother caught a cruise on the teams with the freeze stunt he pulled midway the show. While freeze moments are not uncommon in the Pepper Dem House, the Housemates were sure not expecting it in the middle of their trip. Anyways, that was part of the fun and we took it with the Presentation. 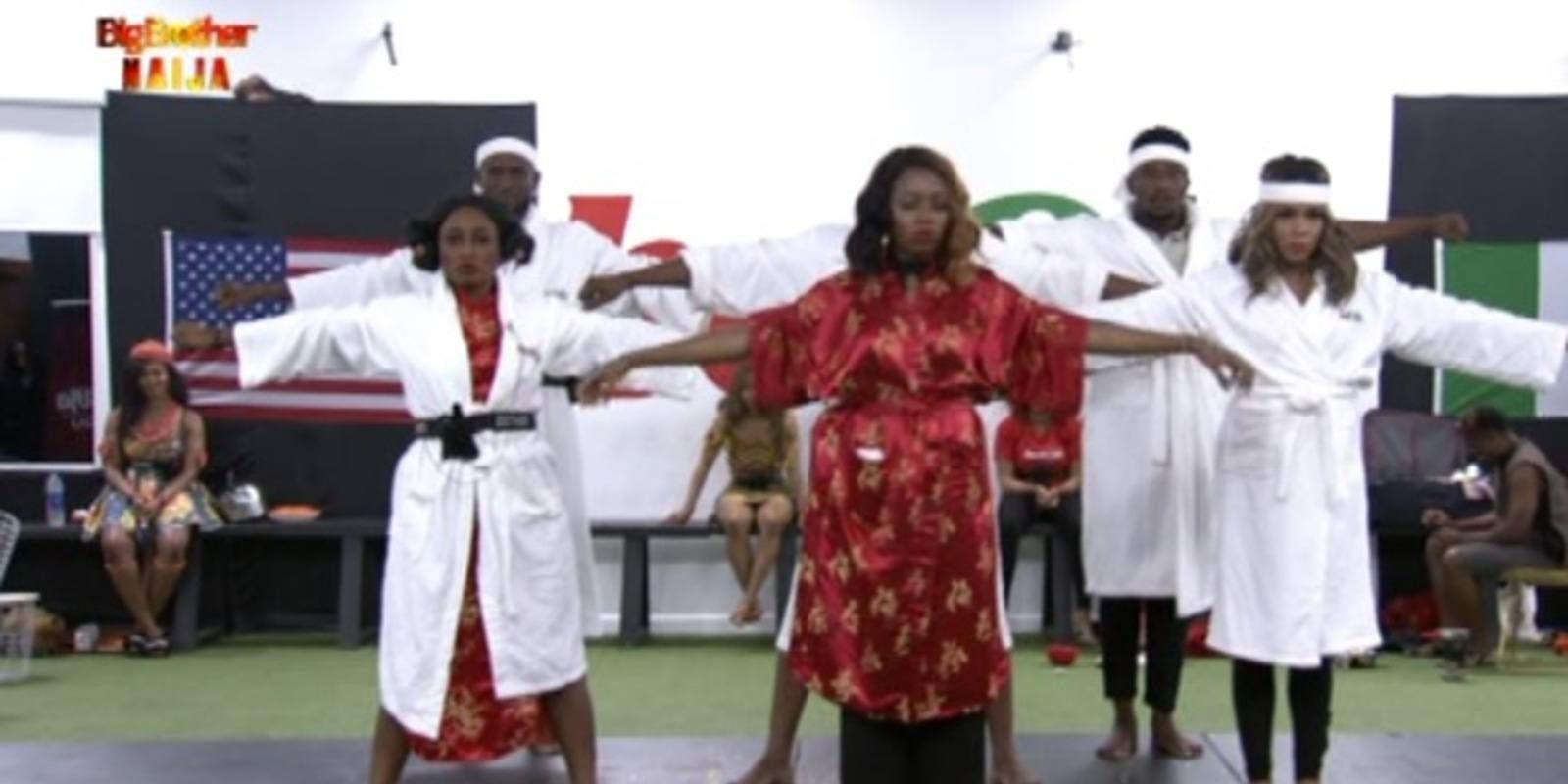 The Wheat And The Chaff

Back from their journey to different countries, it was time to know the fate of the teams. Team legends scored a total of 13 points while team Enigma scored 16 points to become the winner of this week’s Wager Task. The winning team got 20 Bet9ja Coins each. Biggie also acknowledged the Performance of Elozonam and Diane and with that, it was a wrap.

Congratulations to team Enigma on this win and to team legends try again harder next time.