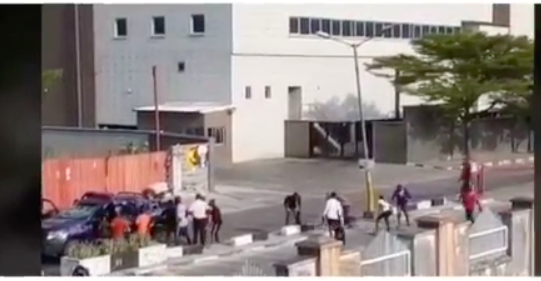 The protest is in response to the xenophobic attacks on Nigerians in South Africa.

It was reported that some youth invaded the shopping mall, destroyed properties before the police arrived.

The xenophobic attacks have been condemned by Nigerians across all spheres of life.

Nigerians disrupting the operations of Shoprite at their Lekki Match. 4 police trucks had to be deployed there to stop the revolt. They also had to close the mall.

Those involved in the act reportedly lost their family members to xenophobic attacks in South Africa. pic.twitter.com/eFOFQrDZS7

Happening Now: Angry women disrupt sales at Shoprite #CircleMall Lekki in retaliation to the ongoing #XenophobicAttack against Nigerians and other Africans in #SouthAfrica#Xenophobia #XenophobicAttacks #EnoughIsEnough pic.twitter.com/2VKnNNZUIU