Daniel Okechukwu: Sugar Rush is Funny but It Is Not to Be Mistaken for Comedy 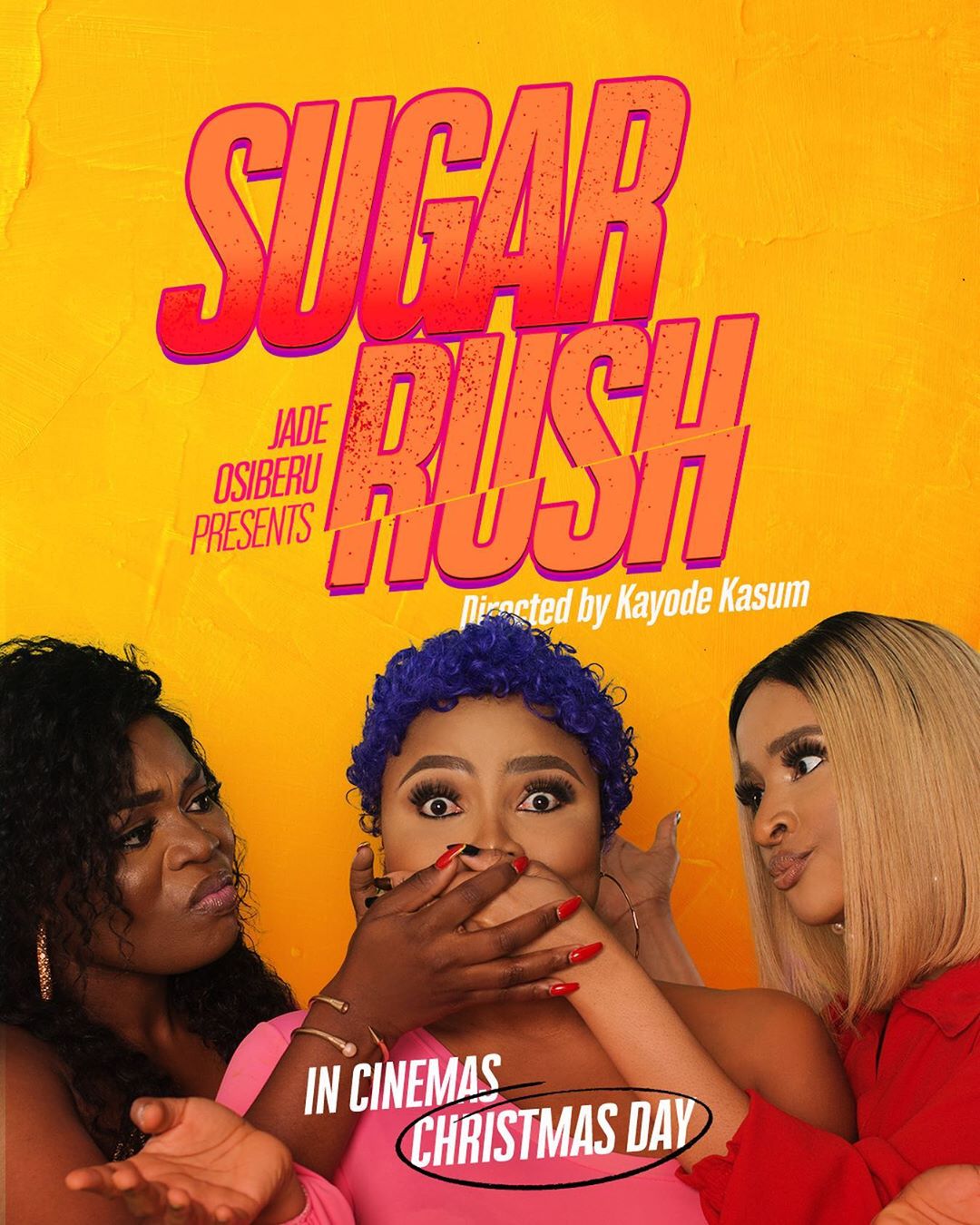 The adjective sweet is rarely used to describe cinema, but it best defines the experience that is the first act of Sugar Rush—a jolly ride that features the hilarious trio of Adesua Etomi, Bimbo Ademoye, and Bisola Aiyeola at their charismatic best.

The trio play the Sugar sisters: Etomi is Susan aka Suzy Sugar, a smart conman; Aiyeola plays Shola aka Sholly Sugar, a not-so-smart scammer who might also be a high-class escort; Ademoye plays Bola Sugar, the youngest and silliest, she is all about that audio life Rudeboy was critiquing on Audio Money—she is from a poor home, but she’s wealthy on Instagram. The script from Bunmi Ajakaiye doesn’t provide an adequate backstory of the sisters’ shenanigans, but a scene is dedicated to each of them so you get their shtick.

All three sisters have one thing in common: they want to escape poverty, Shola can’t stop rambling about Linda Ikeji’s mansion in Banana Island. One night, she and Susan come across $800,000 at a murder scene, and they both convince themselves that taking the money isn’t wrong. “This is not stealing, right?” Suzy asks Sholly. “I dare say what we are doing right now is activism.” Of course, Shola agrees. It is $800,000!

They go on a spending spree — exotic cars, designers’ clothes and shoes, and a house that rivals Ikeji’s mansion.

On the night of the day the EFCC announced the murder and theft on TV, Bola and Shola throw a housewarming party, it draws all sorts of attention and lands them in hot waters. The EFCC visits the next day (with a search warrant), Susan meets them at the door and signals Shola to hide the money. After the search, the officers take the sisters in for questioning.

When they return home, they must grapple with an unknown man, who claims ownership of the $800,000. After much denial, the sisters concede they have the money, but when Shola goes upstairs to get it, the $800,000 seems to have grown legs. Angry and disappointed, he takes their ailing mother hostage and gives the sisters five days to find his money. It is at this point the film becomes less merry and shifts into something more sinister. There’s an element of class war: the sisters’ ‘victims’ are wealthy, crooked people, but this is a Nollywood holiday movie, tackling societal issues isn’t the main focus.

However, Sugar Rush hints it wants to do more than thrill you and make you laugh. After all, its central issues are Nigerian greed and our budding obsession with living a fake life on Instagram because we are collectively ashamed of our poverty. The sisters, especially the younger ones, wanted to prove they are in money now, and that leads to their downfall. But the film never fully embraces its commentary on social issues.

Sugar Rush was advertised as a comedy for apparent commercial reasons and while it is cheerful, it isn’t. It is a crime caper story, a flawed but ambitious one. As a director, Kasum shows he is an exciting talent to have on the big-budget stage, working with the Femi Awojide (cinematographer) and Jade Osiberu (production designer), he stages gorgeous scenes that aren’t shallow—a frequent occurrence in blockbuster Nollywood films.

However, his most remarkable work here is getting consistently solid performances from his actors. The leads are a riot, but who would think that in a film with an excellent Etomi, the standout performer is Aiyeola? She builds on her charming personality from Biodun Stephen’s Picture Perfect to deliver a superbly compelling performance. (Give her lead roles, Nollywood!)

The only let down is the curious case of Banky W’s non-acting. Screenwriter Ajakaiye wrote two intriguing villains: Banky’s Anikulapo and Uzor Arukwe’s Igbo gangster. While Arukwe rises to the occasion, Banky falls flat, even with the more interesting character.

Anikulapo is a feared gangster known for his brutality and his formidable juju powers and in the film’s climax—a crowd-pleasing, often messy juju-fiction heist sequence—we see him in action. It is a character that demands both great acting and charm – two qualities Banky has never convincingly shown since his Nollywood debut. He represents Nollywood big-budget films conundrum: sacrifice talent for popularity because of box office earnings. But Sugar Rush can be forgiven for escaping this problem in other areas: its director, cinematographer, and screenwriter are not widespread yet, but hopefully, the film makes them stars as it is their most impressive work so far.

Daniel Okechukwu is a Nollywood blogger and critic. His writing has appeared on Africa is a Country, Okayafrica and Culture Custodian. He discusses the latest happenings in Nollywood on his blog, That Nollywood Blog. Tweet at him @DTNollywoodblog.