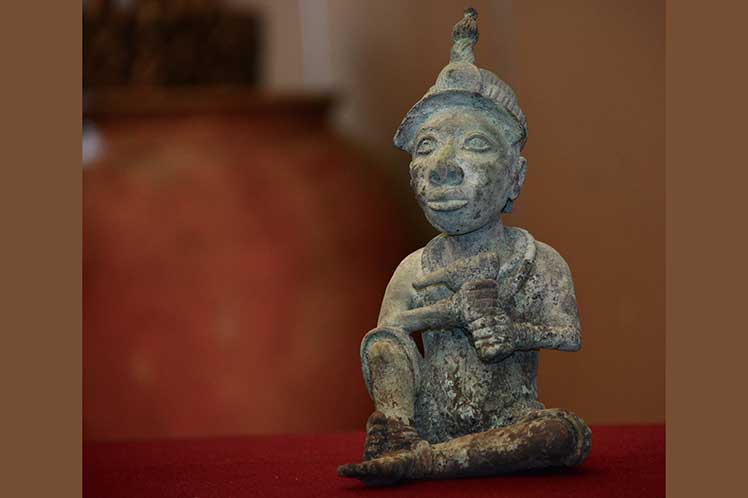 A sculpture from the ancient city of Ife, which dates as far back to the first-millennium era, is back to its root.

The ancient bronze sculpture got seized by customs agents at Mexico City airport. The sculpture shows a man wearing woven pants and a hat, sitting with his legs crossed and holding an instrument.

The piece was delivered during a ceremony held at the headquarters of Mexican Foreign Affairs Secretariat. Julian Ventura, Mexican Deputy Secretary of Foreign Affairs, handed over the sculpture to Aminu Iyawa, Nigerian Ambassador to Mexico, and pointed out that “its immediate detection, authentication and diplomatic efforts allowed that the sculpture returned to the Federal Republic of Nigeria“.

She added that “Mexico and Nigeria are multiethnic and multilingual nations, therefore, they are committed to the fight against theft, robbery and looting of cultural property”.

Aminu Iyawa responding to the return of the ancient artefact said that “the return of this piece to his people, beyond a gesture of friendship, is an action that joins to the global call to return the heritage legacy that was once plundered to their countries of origin, many of them with a colonialist past like Nigeria and Mexico”.

This is great news as the world continues to discuss the plundering of art from several countries during colonisation, with the countries demanding that their stolen art be returned.

Jussie Smollett is Sticking to His Story… “I am innocent”