The report of the arrest of Mubarak Bala, a Nigerian atheist, has sparked a lot of controversy on social media.

Mubarak had allegedly called the Islamic Prophet, Muhammad (SAW), a terrorist on his Facebook page. He said: “there is no difference between Prophet T.B Joshua of Lagos and Prophet Muhammed of Saudi Arabia. Our own from Nigeria is even better in that he was not a terrorist.”

In response, a group of lawyers submitted a petition to the Commissioner of Police in Kano State to prosecute him for insulting Prophet Muhammad. 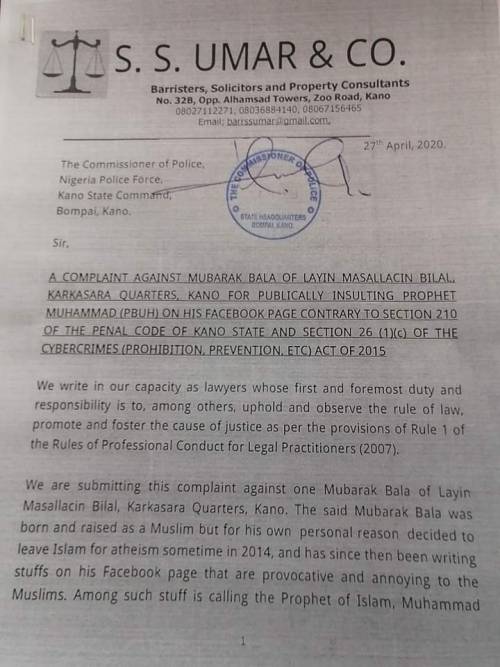 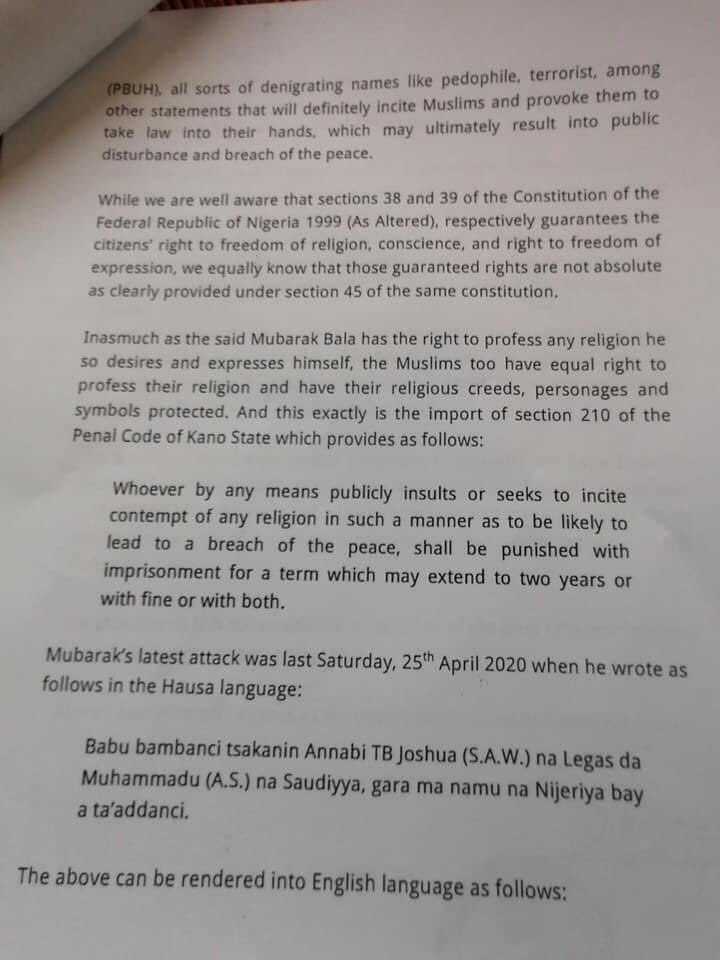 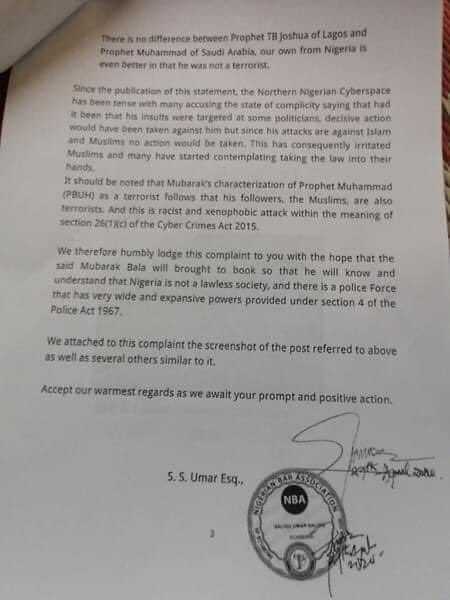 This led to the hashtag #FreeMubarakBala trending on Twitter.

Who is Mubarak Bala?

In 2014, there were many reports of how Mubarak Bala was forced into a psychiatric unit by his family after he denounced Islam. He claimed that people were threatening to kill him after he declared himself an atheist. Efforts were made to counter the family’s claim of Mubarak suffering a personality change that led to his renunciation of Islam.

In the midst of all these, Mubarak accused his father, who described himself as a journalist and director-general of Kano state’s Directorate of Societal Reorientation – one of the bodies that enforce the Islamic Sharia Law, of being “an Islamic leader who could not afford to have a non-Muslim in the family”.

How Free is Freedom?

Steven Kefason, a freelance journalist and a strong critic of the All Progressives Party (APC) was also arrested and jailed in May, 2019 ove a Facebook post. He spent 162 days in prison.

Abubakar Idris, popularly known as Dadiyata, has been missing for months now. Dadiyata, before his abduction was a known critic of the Kano state governor, Ganduje.

In Nigeria, the political and religious ‘scene’ is one where when you beat the drum of words, you have to be ready to dance to whatever music it produces. There are consequences for your words – whether true or false. Both the political and religious sector have very little tolerance for criticism or logic, so if you are ready to shoot your arrow of words, it is better you have a shield in case this arrow is shot right back at you.

Living in a religious-sensitive country

Nigeria claims to be a secular country but religion is still a very sensitive issue. One would think that in 2020, we should be able to discuss our religious views freely. Alas, the reverse the case. Religion, in Nigeria, is still laced with fascism, intolerance and extremism. It is worse in Northern Nigeria where Sharia law is recognized and adopted.

For instance, in 2015, an Islamic court sentenced nine people to death for insulting the Prophet Muhammad in Kano state. The accused, who were all muslims were reported to have said that “Sheikh Ibrahim Naisse was bigger than Prophet Muhammad”. This triggered unrest in the state and incited violence.

In 2016, a pastor’s wife was accused of blasphemy against the islamic religion and killed by some muslim youths.

In 2009, a mob on the rampage in Gwaram, Jigawa State, burnt a police outpost, injuring around 12 people, over an alleged blasphemous statement against the holy Prophet of Islam, Muhammad (SAW) made by a “non-Muslim” resident of the town.

In 2008, a 50-year-old Muslim man, alleged to have uttered “blasphemy” against Muhammad, was besieged in his house in Kano by a Muslim mob, who then beat him into a coma. He later died.

The cycle of tit-for-tat sectarian violence pushed the death toll beyond 100, making Nigeria the hardest-hit country so far in the caricature controversy – a ‘crime’ committed by a non-Nigerian.

This is 2020 and it is glaring that Nigeria has learned nothing and has not embraced religious tolerance.

Moving on From Religious Intolerance

With the rise of human right activism and the evolution of humans, it is important to move beyond intolerance and let people practice whatever they believe in – as long as they don’t pose as a threat to human lives and properties.

More than ever before, Nigerians need to practice the mantra “live and let live”. It is absolutely wrong to maim or kill people because they do not believe in your religion. It is absolutely wrong to also kill a human because they have said certain words against your religion. If your God is so powerful, why don’t you let him fight for himself? If your religion is peaceful and your aim is to win people over to God, then why is violence the go-to action when people do wrong? You cannot win people over to God by killing them, neither can you win people over to God through force, coercion or threats. We need to rise above all these and realise that humanity, at all times, trumps religion.

Embracing religious tolerance is also knowing when to say what. If you do not believe in a certain religion, let those who do practice it then. It is unwise to say terrible things about people’s religion or condemn their practices. Except if their religious beliefs or actions trample on your fundamental human right or poses as a threat to people’s life and existence, leave them in peace. Being a human right activist does not mean looking for trouble where it sleeps. Live and let live.

What Does the Law Say?

According to the section, entitled “Insult to religion”, it says:

“Any person who does an act which any class of persons consider as a public insult on their religion, with the intention that they should consider the act such an insult, and any person who does an unlawful act with the knowledge that any class of persons will consider it such an insult, is guilty of a misdemeanour, and is liable to imprisonment for two years.”

The Sharia law may also treat blasphemy as deserving of several punishments up to, and including, execution.

However, the Nigerian law contradicts itself when it states in Section 39(1) of the 1999 Constitution provides that “every person shall be entitled to freedom of expression, including freedom to hold opinions and to receive and impart information without interference.”

The section 10 of the constitution also states, ‘The Government of the Federation of a State shall not adopt any religion as ‘State Religion.’

In the same vein, sections 275–279 of the Constitution give constituent states the power to establish their own Sharia courts. 12 Nigerian states currently practice the Sharia law, however, Christians and other non-Muslims are not obliged to abide by Sharia law in any of the 12 states.

Now, if the constitution gives room for freedom of speech and expression and the Sharia law does not apply to non-Muslims, why should Mubarak Bala – who now identifies as an atheist – be prosecuted according to Sharia law in Kano? Is that not going against the constitution?

Perhaps it is time to revisit our customary laws and constitution as a whole. The duty of the government is to protect lives and if someone can be executed for a Facebook post, then it means that the government has failed in its duties.

It is high time Nigeria also decided if Sharia law is beneficial to the people of Northern Nigeria, especially since many people have expressed the view that Sharia law of is used as a tool of manipulation for political purposes and to satisfy a certain group of people.

At the end of it all, we should realise that religion should never be a tool to stifle people. It should never be violent neither should it be forced on people. People should never lose their lives or body parts because their religious views contradict yours. Humanity first.

In the same vein, we need to respect people’s religion and avoid actions that will foster public unrest.