Tribute to Omolara Sonoiki - "It has been Five Years without you, but it still Feels like Yesterday" 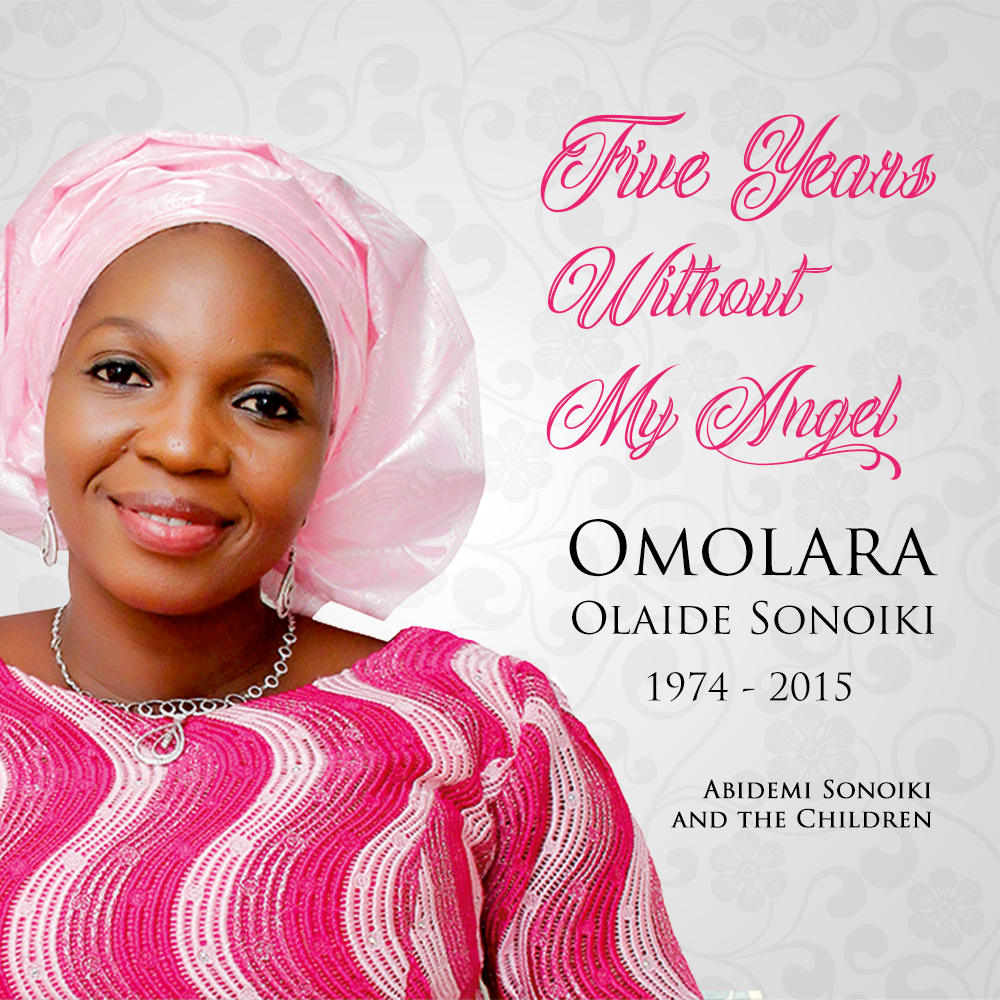 It was an eerie day on June 16, 2015, as my wife took her last breath. Before then, she had been diagnosed with cervical cancer and we had taken steps to get her the best of medical attention in faraway Emory in Atlanta, Georgia, United States but she needed to attend a wedding of the Adewumi’s in Lagos so she asked to go off to Nigeria for a few weeks so she can be back to concentrate on her treatment. So, off we went, back to Lagos, bearing our pain but carrying our cross with equanimity, believing in divine grace to see us through.

Of course, we had “fun” at the wedding in Lagos, but the pain of our shocking discovery still loomed in the background. Omolara played the perfect hostess, ensuring that all went well at the wedding even though she was carrying a cross. She greeted, smiled, and danced as if hinting at a rite of passage. She remained brave through it all despite the uncertain fate that lay ahead of her.

Our Lagos journey done, we headed for the United States of America to commence treatment and upon our arrival, we were shocked to discover that she had moved from the initial stage two cancer on discovery to stage four cancer upon our return. This news shook our faith. How can cancer move from stage two to stage four in a matter of a few weeks? How did this happen? We were not so advised upon disclosing our intention to travel to Nigeria for a few weeks before commencing treatment. We laid on the bed that night wondering how we will conquer this battle but trusted that God will come through for us.

The battle began and tough as it was, Omolara stood her ground, initially choosing life over death knowing that we had the kids from Oluwateniola, to Oluwanife and little Oluwafoyinsolami looking up to Mummy’s love and her being there for them as they graduate and take the first steps to adulthood. She had a lot to live for. We had gone through life’s vicissitudes together, bearing the good, the bad, and the ugly that life threw at us – yet Omolara stood firm by me through it all. Now all was starting to look up. She had started her Company Dressessence on shoestrings and had grown it into a high-street choice clothier for the upwardly mobile.

She had grown from a bashful woman, shy to confront the world, to a woman who knew her onions and had targets ahead of her. Now the cancer was threatening to end it all. As she laid on the hospital bed receiving treatment, she reasserted the need to live – at least to continue the fight to create a better world for all around her. She had retorted that she will live to tell the story and hopefully be there to guide others walking in her shoes. But alas, fate had its way on June 16, 2015, as she bade the world a hurried goodbye. As she took her last breath I held on to her praying for a miracle and believing that this was all a dream, but alas, my beloved wife of almost two decades was gone. I cried that day like a wounded Lion as if my tears will bring her back, but she was gone. Her body soon began to get cold with her limbs becoming stiff. She had tried her best to hold on to life, but the pain of the treatment and the ferocity of the cancer was all too much for her to bear.

Born on November 8, 1974, Omolara Olaide Sonoiki was the daughter of Mr. & Mrs. Johnson Oyewole. She attained her secondary education from Lady’s of Apostles, Ijebu-Ode, and her tertiary education from Ogun State University, Ago-Iwoye in 2001 meanwhile graduating with a Bachelors Degree (BSc) in Town and Regional Planning. Shortly after graduation, she worked with the Lagos State Ministry of Environment & Physical Planning before her foray into business.

Driven by her passion, she founded Dressence Clothings in 2002 and, over the years, built her brainchild into a reputable brand of a class. Today, Dressence is a household name in the world of corporate clothing, with presence in Awolowo Road, Ikoyi; and Alade Market, Allen Avenue, Ikeja. Exclusivity and style uniqueness remains a distinguishing trait of the brand till this very day.

Fondly called Laroski by me and the children, Omolara was one person who would never settle for less and with her philanthropic strides, had a huge impact on the lives of people on personal levels and in business. Her departure was painful and indeed a great loss.

Today, I pay tribute to the woman who God brought to add value to my life. Today I pay tribute to my confidant and best friend. It has been five years without you, but it still feels like yesterday.

Related Topics:Omolara Olaide Sonoiki
Up Next