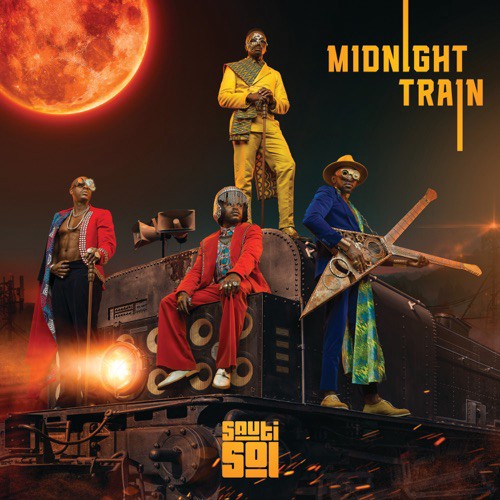 The award-winning afro-pop band Sauti Sol announced on Friday that their fifth studio album, “Midnight Train“, will be released on 5 June 2020.

The album houses 13 tracks which include previously released tracks, the rhythmic love jam ‘Suzanna’, the lead song from Netflix’s “Queen Sono” ‘Disco Matanga’, the uplifting ‘Brighter Days’, and ‘Insecure’ that explores the fear and insecurity that lies deep within.

Special and notable features on the album include American singer and songwriter, India Arie on sensual track “My Everything,” and Burna Boy guest appears on “Time Flies.” When reflecting, Bien explains that “Time Flies is inspired by Burna Boy’s increase journey. A lot can happen in a year with dedication.”

Recorded between Los Angeles, California, Johannesburg, South Africa and their hometown Nairobi, Kenya, “Midnight Train” demonstrates the bands songwriting and producing skills with electric energy and new rhythms. The album’s theme is centred around enjoying the journey of life but also embracing the hustles and the trials that come with it. You can count on Sauti Sol to deliver music from the heart and “Midnight Train” does not stray from the formula.

My Everything ft. India Arie

Yung6ix is Out with a New Album “Introduction to Trapfro”