Three days in Biggie’s House and the Lockdown housemates are already bonding and shipping.

In what seemed like new alliances formed in the House, the Lockdown Housemates went deeper in their quest to know one another. While Wathoni and Brighto bonded over pictures, Tochi and Lucy spent the night analyzing the cliques in the house.

While the housemates were working hard to ace their get-to-know-me task of the week, Big Brother decided to put their lockdown-acquired skills to test. In addition to their creativity in making their own hand sanitizers and nose masks, the housemates were provided with necessary materials for this task. 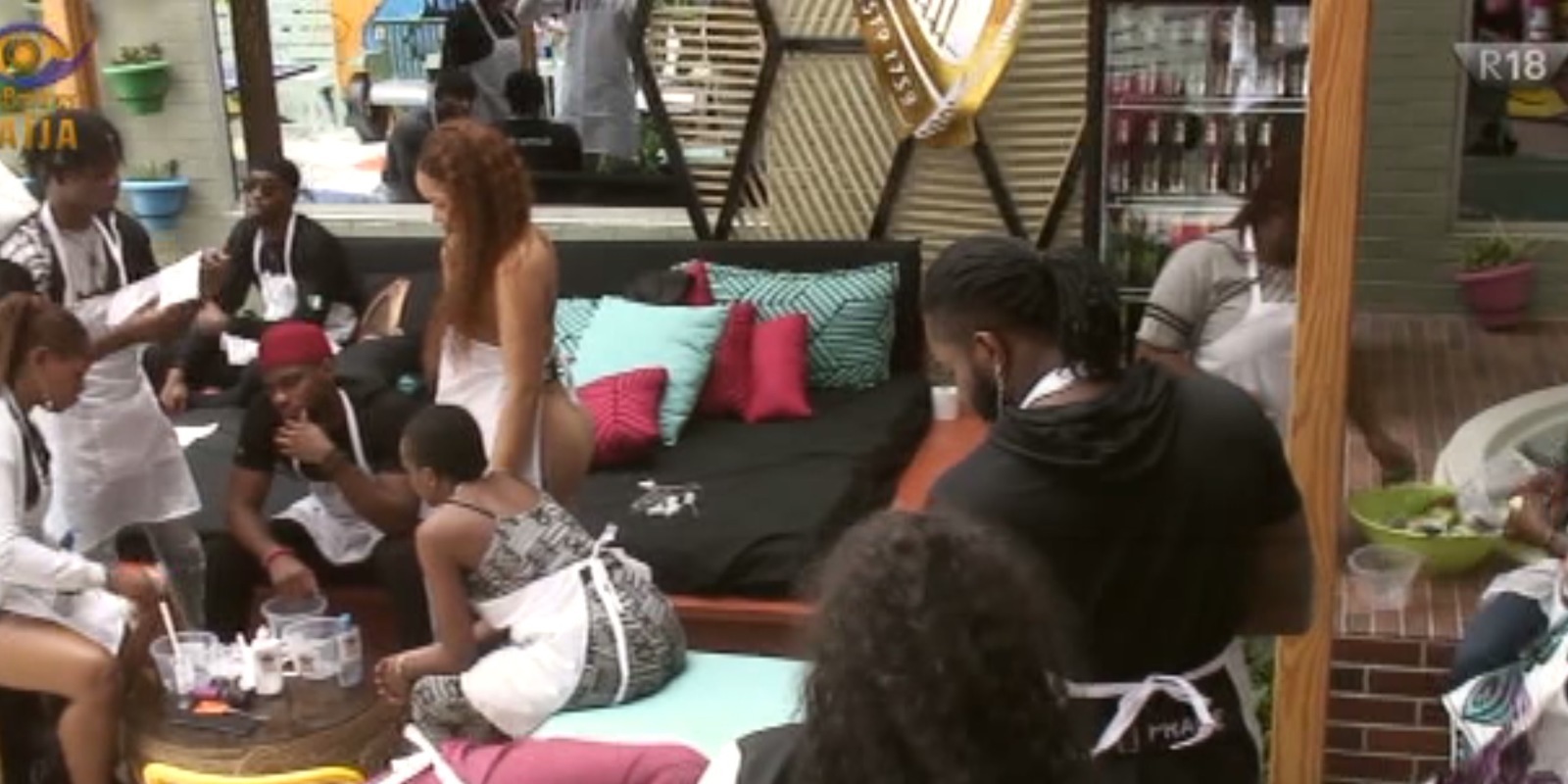 For this challenge, they were required to split themselves into 4 groups, 5 on each team.

In this task, Biggie emphasized on the need to sanitize before the task and after they are done. There’s creativity in keeping safe.  Creativity seems to be the order of the day as the housemates unleashed their tailoring skills. Different shades on patterned nose masks as well as various sizes of hand-made hand sanitizers.

The Housemates seemed to have saved the juiciest revelations for last as they spilt some interesting facts about themselves after the diary session. There was something about taking that centre seat that made them feel like they entered a confession booth.

After Vee blew Neo’s trumpet for his smooth massaging skills, Erica had no choice but to request the services of his magic palms.

Brighto talked about his academic exploits but that wasn’t what got the room buzzing. It was the brief comment he made about his relationship that made the rest of the Housemates hit rewind on the remote control. There was no way they were letting him gloss over that piece of juicy information. Apparently Brighto had been in a relationship that lasted for eight years and as the Housemates prodded further, he revealed they had weren’t intimate during their affair. As expected, the guys expressed shock at him holding all that pent-up love juice in him for so long. 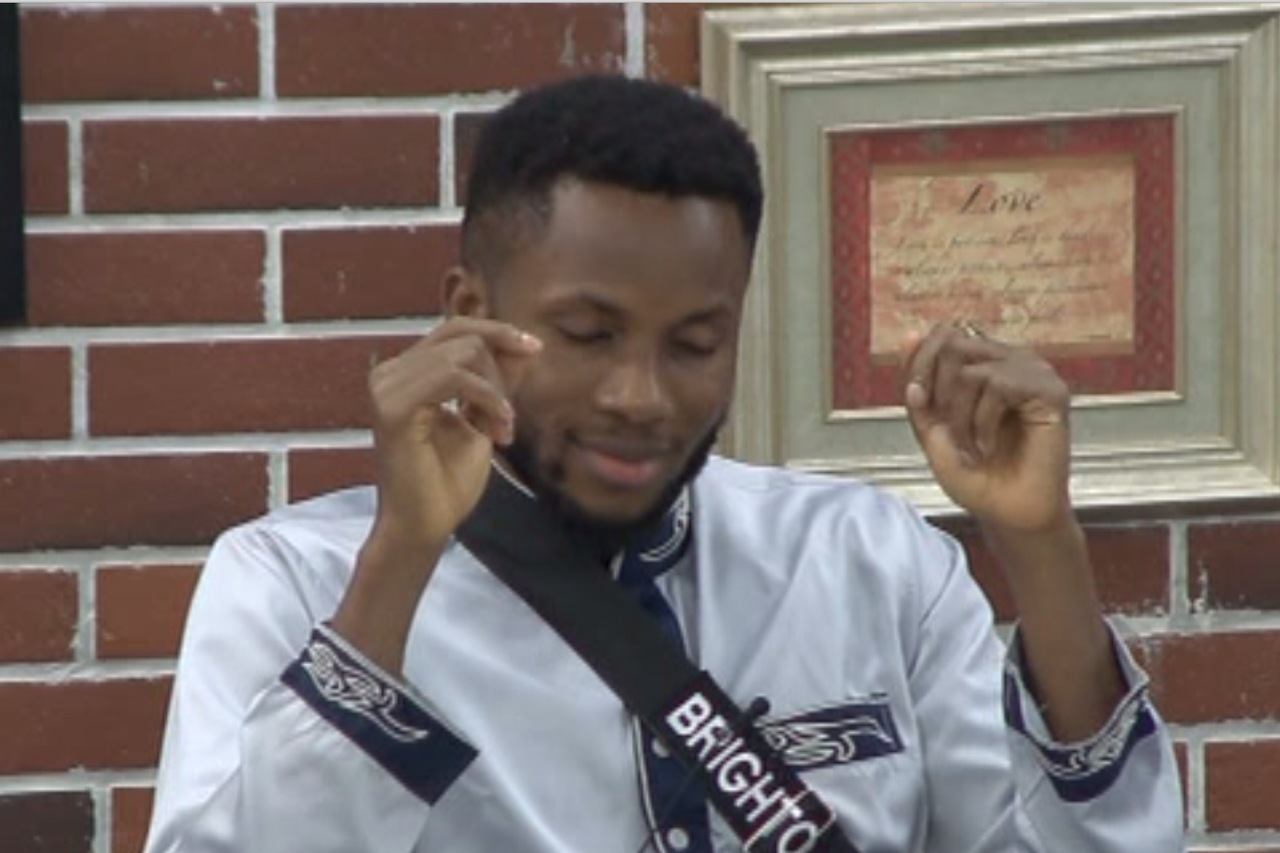 The housemates got to sharing the biggest lies they have ever told. Relationships, sex, and friendship were all there and the majority of the stories shocked us more than an illegal electricity connection.

Although they come from different backgrounds, Prince and Trickytee share a passion for being go-getters. Not only have they both fulfilled their dream of making it into the Big Brother House, but they have also set up businesses for themselves in their quest to be self-sufficient. But that isn’t really the juicy part. Their love for exotic adult content is what had their Housemates looking at them with side-eyes. While Prince has an appetite for homemade videos, Trickytee is a lover of all. Trickytee did say it was a past time guilty pleasure, but the gleam in his eyes at that moment had the Housemates in doubt.

Nengi’s confession about her self-helping escapades because of her long-distance relationship.

The ‘get to know me’ session did create mild tension between Lucy and Lilo and there was a bit of confrontation. Lilo believed she heard Lucy make a side comment about her during her session and confronted her.

Lucy insisted she didn’t make that comment in response to her and felt Lilo should have asked her instead. In her discussion with Tochi about her confrontation, she said the comment she made about the session being hurried up was not addressed to Lucy but a general response to the entire session because she was getting hungry. “If you did not hear something well, you could have asked me,” she said wondering why the confrontation.

Just when you think you have seen it all the Lockdown Housemates find a new way to surprise you. When it came time to sleep Dorathy and Prince decided they would be perfect pillow pals. The sight was pretty but the sound of Prince sleeping had viewers wondering if Dorthay got any sleep at all.

After three days of walking around Biggie’s House and saying next to nothing, Lilo finally let down her guard just a little bit. During a late-night chat around the table with other Housemates, she started to share the nuances that make her uniquely perfect for Big Brother.

Biggie continued calling Housemates into the Diary Room for sessions. The number of surprises that popped up would be too much to share in one quick sitting so read all about here and gossip amongst your friends like you watched the whole thing.

Here’s how today’s Diary Session went in the #BBNaijaLockdown house. Looks like a lot of ships are getting set to leave the docks. Which one are your rooting for? #BellaNaija #BBNaija #BNxBBNaija5 BellaNaija.com

Just when you think there can’t be any more drama in Biggie’s House, the Housemates find new was to make Lockdown the hottest Big Brother Naija season yet!

Related Topics:#BBNaija5#BBNaijaLockdown#BNxBBNaija5Big Brother Naija
Up Next

Yinka Davies tells it All – Life at Fifty, Entertainment Industry & Future Projects in this Interview with City People

Mbali finds out the Truth about Sol on this Episode of “MTV Shuga: Alone Together”