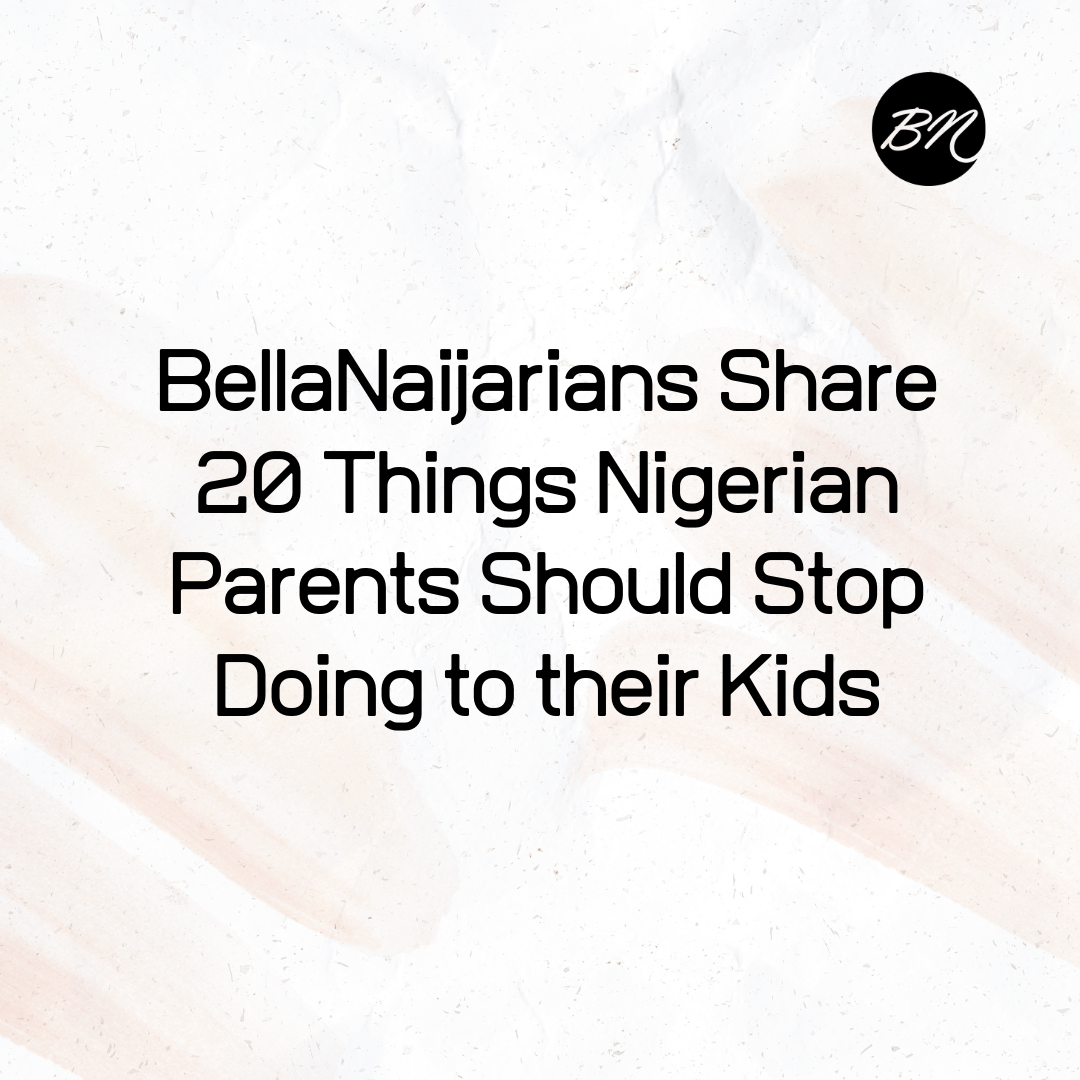 Every parent wants to raise the best kids they possibly can. They want to be a guiding force in the life of their kids, they also want to have fun adventures and make special memories with them. Most parents would say they look forward to having a close friendship with their child as they grow older, but there are things parents do that hurt their kids.

Just one little step could destroy many years of love, and friendship.

So to that end, BellaNaijarians share things Nigerian parents should stop doing that will lead to a healthy, balanced relationship with your kids both today and in the future:

“Let them be who God ordained them to be” – Dakore Egbuson-Akande.

“Comparing them with other children” – Mrs Nnawuchi.

“They should stop being over protective ….at my age I still can’t go out freely to see my friends …literarily she doesn’t allow me go out… I just pity my sister now …that’s the reason most students prefer staying back in school than going home. I’m a student of Ilorin 300lv ..since when d lockdown started I’ve been in school I didn’t go home till date”  Oluwatosin.

“1) Feeling too proud to apologise. (2) Being to busy to listen to their children attentively. (3) Going all the way to support them whenever they hv a presentation. (4) Mono education” – Ajuzie Amtita.

“Stop saying boys shouldn’t be in the kitchen. Cooking is a life skill and isn’t gender specific” – Akpo Oghenefego.

“Stop forcing profession on dem rather build up wat is in dem for d good of humanity” –Fatima Lawal.

“A lot to list here! I’ll say a few. 1) Stop the physical & emotional abuse (it’s damaging). 2) Stop fighting in front of your kids. 3) Stop comparing your kids to other kids. 4) Listen to your kids, allow them express themselves to you and give them emotional support (not everything is about buying gifts/clothes). 5) Apologise to them when you are in the wrong (it won’t take anything away from you)” –  Rebecca.

“Favouritism, all should be raised equally no matter the gender. Male Child in particular as focus is majorly on the Famale” – Gloria.

“Telling me not to have boyfriends, because now they have changed potential suitors away and now I am single, my mother is asking when will I get married. Mchuuuu when I was 15/21 they said I must not have boyfriend” – Temidayo.

“They should stop judging, stop physical beating, comparing their children to others and learn to be close to their children” – Tolulope.

“Avoiding sex education discussions… Making you accept their wrong choices.. Comparing children with various parameters. Choosing careers for the children. Making you apologize for being expressive and vocal” – Doris.

“Negative motivation. Speaking down on the child’s performance everytime an ounce of encouragement. This has marred many children psychologically” – Theopistis.

“Telling them to “shut up” anytime they trynna make a point… it destroys their esteem” – e_lomese.

“Doing anything that will make them insecure” – Bunmi.

From all indications, Nigerian parents are such an interesting bunch, and the most common replies we got are:

What other things should parents stop doing? Please share in the comments below.