All that Has Happened Since the End of the #EndSARS Protests

It’s barely a month since the #EndSARS protests started and over 2 weeks since the #LekkiMassacre, but a lot has happened since then. For one, Nigerians seem to have been discouraged a little bit, but they are still committed to their fight for a better Nigeria. The youths have also made promises to get their PVCs and participate actively in citizenry henceforth. In fact, there have been talks and WhatsApp broadcasts of a Youth Democratic Party (YDP).

But it’s not just Nigerian youths who have been busy planning and strategizing on what and what not to do. The Nigerian government has also been super busy. Here’s what they’ve been up to since the end of the protests, in no particular order.

The Game of Denial

After the events of the #LekkiMassacre, the Nigerian Army, Nigerian Police Force, and the Lagos State Government seem to be playing a game. In this game, no one is yet to score a goal, but the ball is being passed from one player to another. First, the Nigerian Army denied that they were present at the scene of the massacre. This they did by tagging every news report that claimed they shot at peaceful protesters as ‘fake news’.

After eyewitnesses insisted that soldiers were present at the Lekki toll gate, and they shot at peaceful protesters, the Attorney General of the Federation and Minister of Justice of Nigeria, Abubakar Malami, claimed that those ‘men in uniform’ must have been hoodlums.

Then Lagos State governor, Babajide Sanwo-Olu, in an interview with Becky Anderson on CNN, later admitted that the footage showed the presence of the Nigerian Army.

Jide Sanwoolu has now admitted that the military were deployed. And that there were casualties.

We are getting there. The truth will come out.#EndSARSpic.twitter.com/3RzRqGDcgc

After Babajide Sanwo-Olu’s interview on CNN, the Nigerian Army then came out to say that it was the Lagos State governor who invited them to intervene in the #EndSARS protest.

Then during the Lagos judicial panel, the Nigerian Army again admitted that they were at the Lekki toll gate, but they didn’t shoot protesters. In fact, they claimed that they offered protesters water.

After that, they insisted that they only fired blank ammunition.

Even the Nigerian Police Force joined the charade.

The Inspector-General of Police, IGP M.A Adamu, NPM, mni has affirmed that

They insisted that the protesters killed policemen and vandalised properties, even though several videos and photos showed otherwise.

and twenty-six (26) others injured by the protesters. Two hundred and five (205) police stations, corporate facilities and private property were attacked, burnt or vandalized.

Up until now, everything is still turnioniown.

The Abuja Federal High Court granted the request of the Central Bank of Nigeria to freeze the accounts of 20 people who participated in the #EndSARS protests until January 2021. 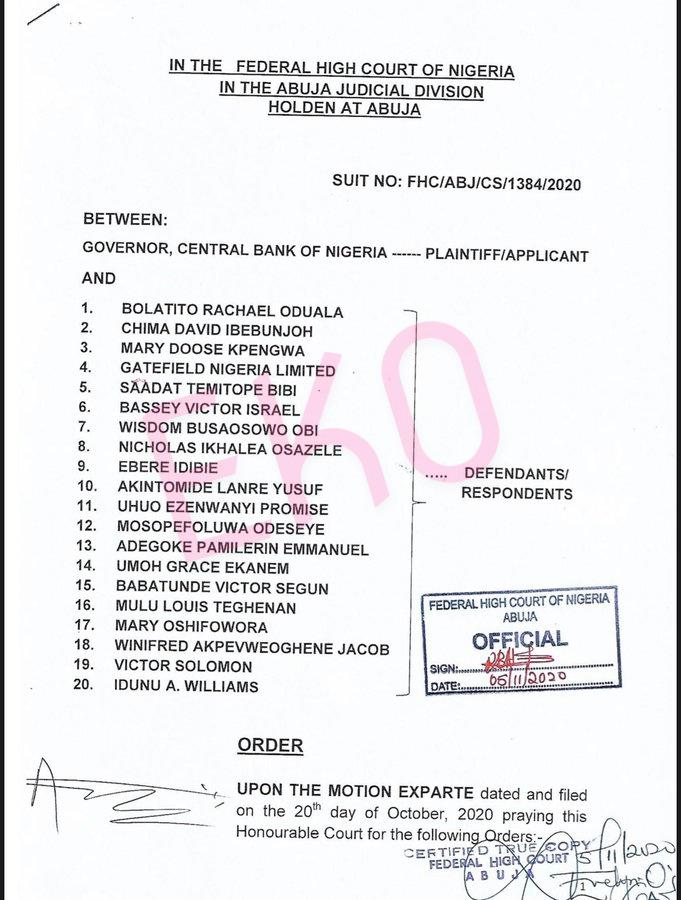 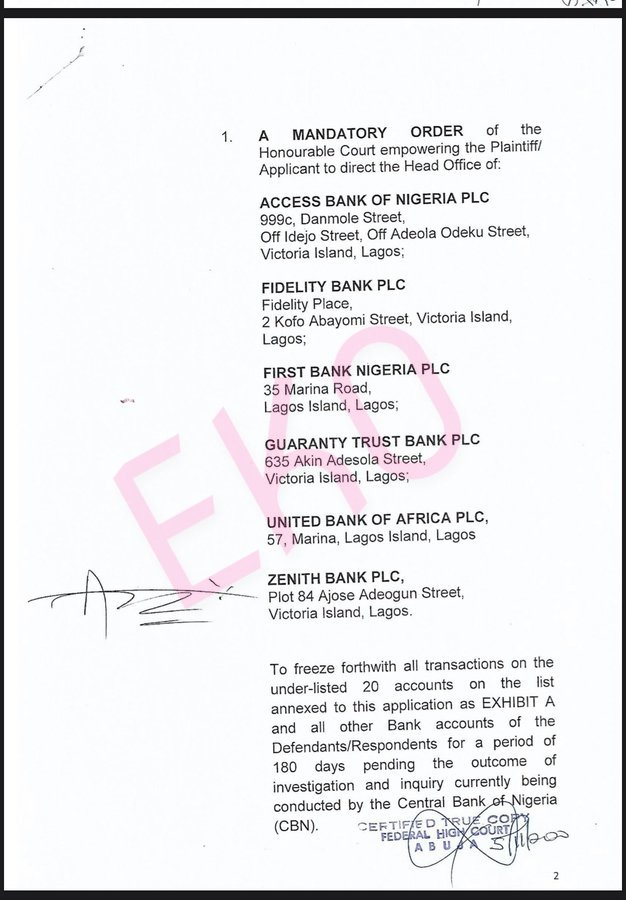 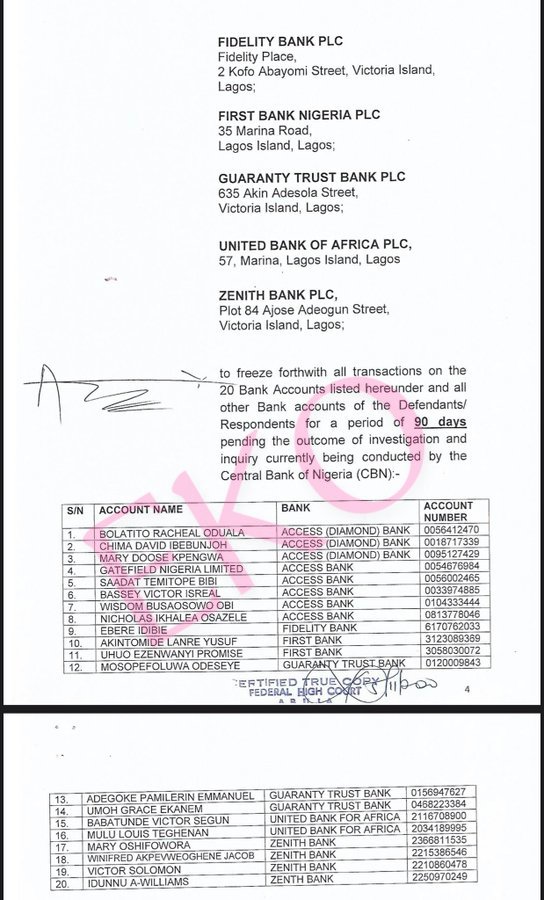 PUNCH reported that the Central Bank of Nigeria froze the accounts of 20 #EndSARS protesters. They also reported that the Senior Special Assistant to the President on Media and Publicity, Garba Shehu, said that “EndSARS ‘promoters’ must account for their actions for allowing the protests to degenerate into the destruction of lives and properties in the country.”

A Passport and A ‘Seizing’

While trying to board a flight to Dubai, the Nigerian Immigration Service seized the passport of Modupe Odele, known as Moechievous on Twitter. Aside from saying she was under investigation, they gave no further reason for withholding her passport.

Then they invited her to pick up the passport by 4 pm on Friday, 6th November.

I’ve been told by Immigration that my passport is ready for collection from 4pm today. I’ve respectfully informed them I’ll be there on Monday to pick it up. Since today is Friday, I asked for an earlier time but was told it will only be ready from 4pm today Friday.

Passport now picked up. No issues. I’m told I can travel at any time. Thank you so much everyone for the help and concern 🙏🏽

State governors decided to arrest ‘looters‘ who carted away COVID-19 palliatives that were meant to be shared to Nigerians during the lockdown. Some also vandalised and looted private businesses.

Still, many Nigerians on social media believed that majority of those arrested could be innocent.

18. Legal Aid Council of Nigeria noted that Lagos detained suspected looters, boys and girls as young as 15 years and men and women as old as 70. They requested a list of all suspects. Unclear if that demand has been complied with.

Even after I shared the good news that 253 people will be released in Lagos because Police has no evidence against them, I can’t help but feel incredibly sad that TWO HUNDRED AND FIFTY THREE persons were detained for so long by the Police without any evidence of any crime. Jeez!

In the past few days, there have been reports of protesters being arrested.

Protest is our fundamental right that we cannot desist from no matter the dictatorship in the land! Free Eromosele Adene now! @simplyEromz is not a criminal! #FreeEromz #EndSARS #EndPoliceBrutalityinNigera pic.twitter.com/LKm9BaLzO8

He was reportedly brought before CP Hakeem Odumosu; transferred to State CID, Panti,. Taken to Area F, Ikeja, then, Abuja. Why is @PoliceNG so hare brained? https://t.co/zBTUJjYT7x

We've confirmed that he was taken to Abuja today. I spoke to him earlier and he is okay.

Our lawyer is with him, his lawyer is also now in Abuja and many people are working to get him out as soon as possible. Will update when there's any more concrete info https://t.co/WCEOgjwjuR

– End SARS : Protesters arrested at the National Assembly yesterday to remain in custody till January 25, 2021.

The Nigerian police force released statements on the protests where the IGP ordered AIGs and CPs to use ‘legitimate force’ in preventing a reoccurrence of the ‘violent protests’, and Nigerians are wondering if this is a subtle threat or not.

RESIST ALL VIOLENT AND RIOTOUS ELEMENTS FORTHWITH: IGP ORDERS AIGs, CPs.
•Directs the Use of lawful Force in line with the Constitution

The Inspector-General of Police, IGP M.A Adamu, NPM, mni has ordered the deployment of all legitimate force

He warns that the Force shall deploy the full weight of the law and legitimate force (if necessary) in preventing a reoccurrence. 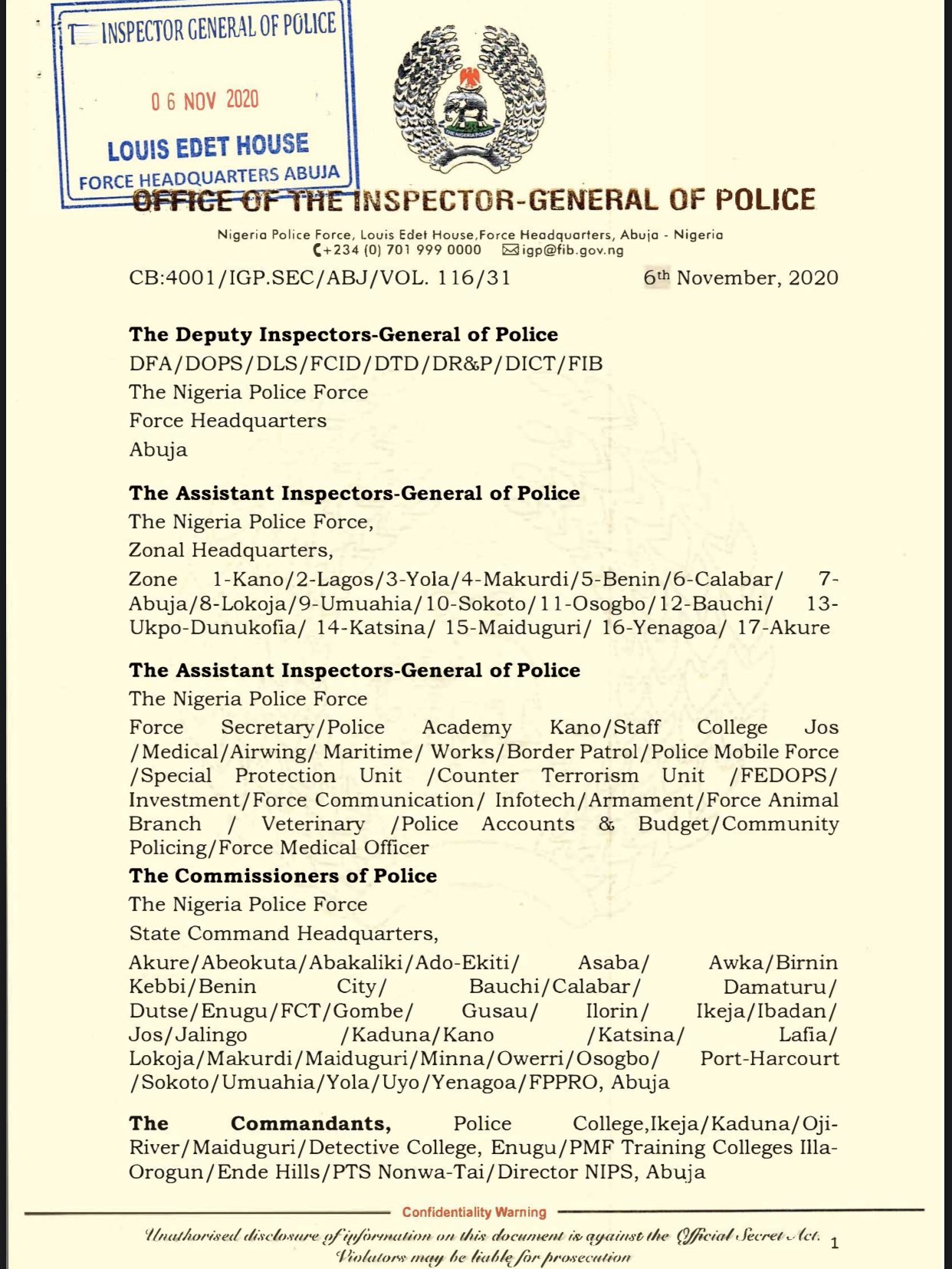 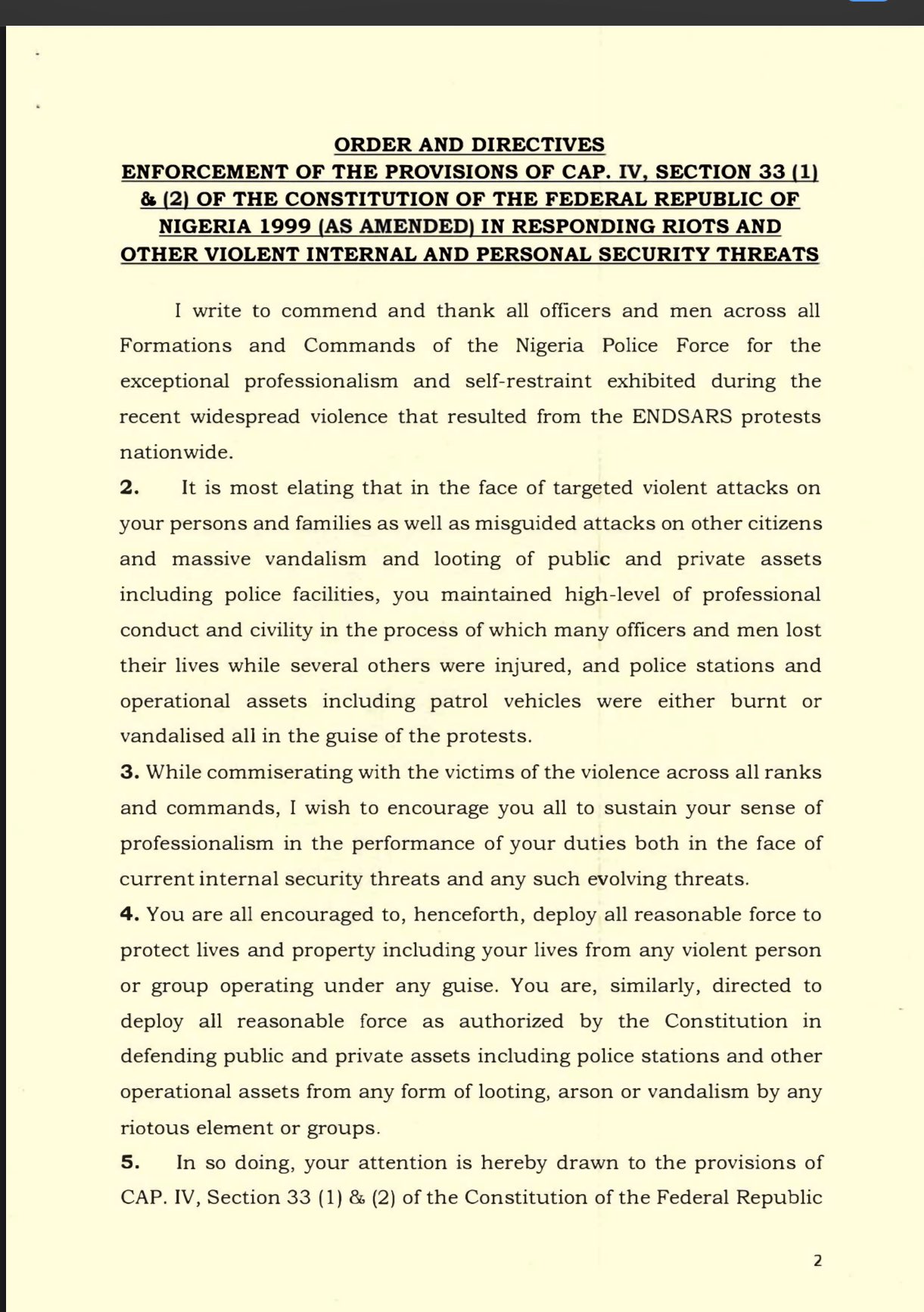 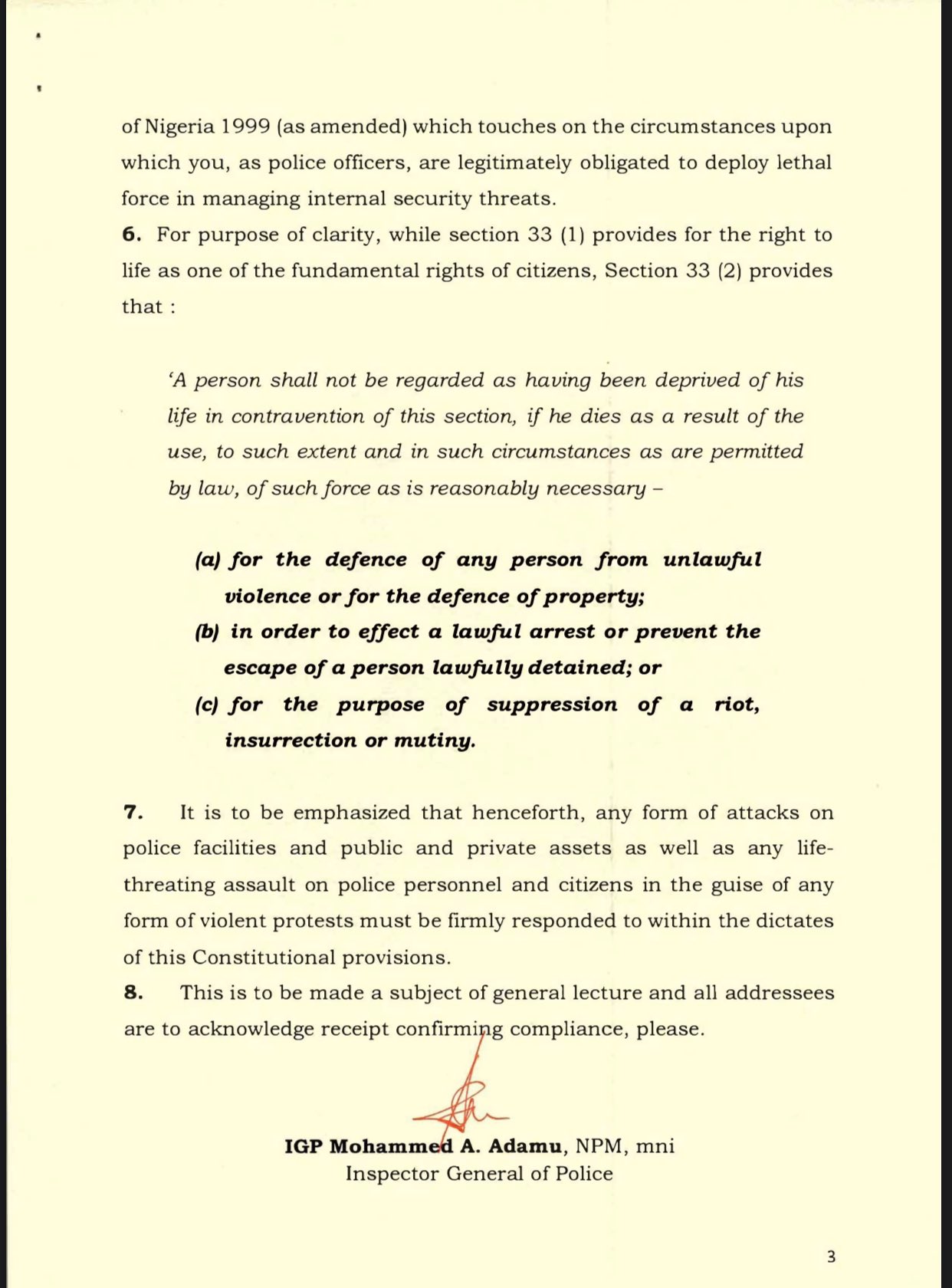 The Lagos State Police Command has vowed to resist any form of planned protest, procession or gathering under any guise or nomenclature in Lagos as the government and residents of the State recover from the devastating havoc and violence unleashed by suspected hoodlums.#LASG pic.twitter.com/RvUkIrBufE

"Premised on this, the Command, therefore, wishes to warn private individuals, groups of students and others who might be contemplating any form of protest or gathering whatsoever, to desist".@jidesanwoolu @LagosPoliceng#LASG #ForAGreaterLagos

20-year-old Pelumi Onifade, who worked at Gboah TV, was covering the #EndSARS protest in Abule-Egba when he was arrested by members of the Lagos State Task Force. That was the last people saw of him.

Rest in peace Pelumi, lights will guide you home 🕯 pic.twitter.com/vp8ntjikwk

Pelumi was said to have filmed that viral video of Abiodun Bolarinwa, the President-General of Yoruba Youth Forum (YYF), who was caught on camera shooting at protesters at Abule Egba. 2 people reportedly lost their lives. Pelumi was arrested on October 24 and was allegedly killed by the Lagos State Task Force. His body was found at a mortuary in Ikorodu.

— Two reportedly dead, as Nigerian politician identified as Abiodun Bolarinwa , shot at Peaceful Protesters in Abule Egba , Lagos after he was prevented from addressing them! pic.twitter.com/bQ2jcTiFKO

The Nigerian Children and the Social Media Bill

After the protests, our politicians decided that they had had enough of these ‘children’ who are “cursing, doing drugs, and doing all sorts on social media”. They then decided that social media and ‘fake news’ are more deadly than Boko Haram and there is a need to regulate it. While appearing before the House of Representatives Committee on Information, National Orientation, Ethics, and Values to defend the 2021 budget proposed by his ministry, Lai Mohammed said that Nigeria is sitting on a keg of gunpowder if the issue of fake news shared on social media is not urgently addressed. He also said, “We will not fold our arms  to allow purveyors of fake news and hate speech to use the social media to destabilise the country.”

Many negative things have been said about the protest, but none of them trumps the statement by Borno State Governor, Babagana Zulum, who warned protesters to be careful because “Boko Haram crisis in the North-Eastern part of the country started with protests by youths.”

26 states have set up judicial panels of inquiry to look into the many cases of alleged violations of human rights by the Special Anti-Robbery Squad (SARS) and other units of the police.

10:23 The youth panel members are NOT here. They’re pulling out in protest as one of the members’ (@SavvyRinu) bank account was frozen by @cenbank.

The panel will have to adjourn, while that is resolved.

Many governors left the affairs of their states and traveled to Lagos to pay a condolence visit to Governor Babajide Sanwo-Olu over the loss of properties. Some ministers also left their jobs to sympathize with Governor Sanwo-Olu.

Even though many lives were lost, Kaduna State governor, Nasir El-Rufai, almost cried because buildings and buses were destroyed.

The Inspector-General of Police and the DG of DSS, who are heads of independent agencies, also joined the entourage who went to pay a condolence visit to the Jagaban of Lagos, Bola Ahmed Tinubu, over the recent destruction in Lagos.

A Minister and a Discoverer

5 days after the #LekkiMassacre, Babatunde Fashola, the Minister of Works and Housing, discovered a mysterious camera that was openly hidden at the Lekki Toll Gate.

Minister of Works and Housing Babatunde Fashola discover a secret camera at the Lekki tollgate pic.twitter.com/br9EKv98j4

Definitely, as the days and weeks pass, more will still unfold, the Nigerian government hard at work. Still, the one thing the Nigerian youths demanded for—the end of extrajudicial killings by the Nigeria Police Force—is yet to be acted upon.

Elizabeth Agboola: Why Jamaica Should Be Your Next Immediate ‘Escape’