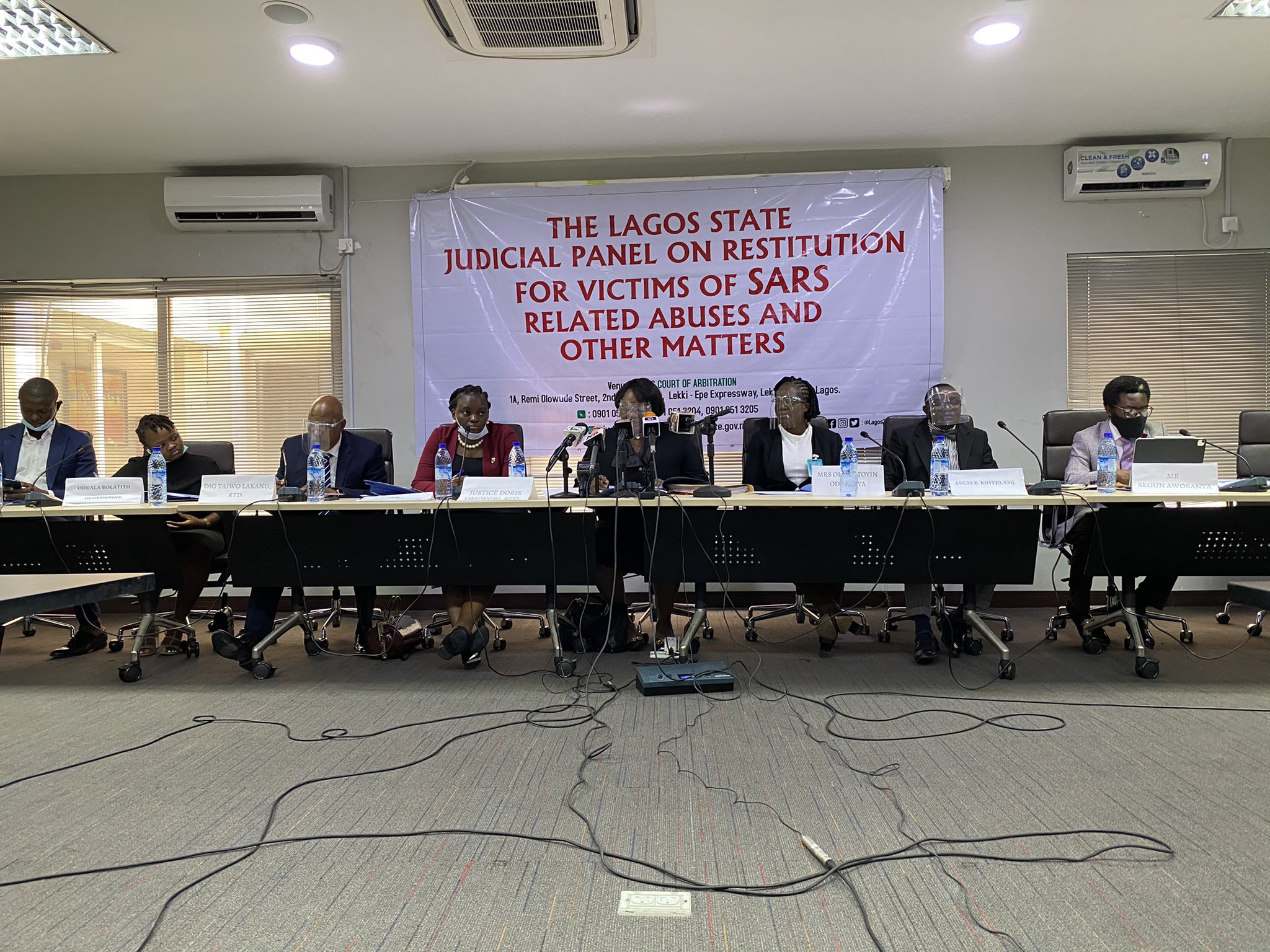 In light of the 5-point demands made by the #EndSARS protesters, the Judicial Panel of Inquiry set up to investigate the cases of police brutality in Lagos State.

For the panel sitting on Tuesday, November 3, the Lekki Concession Company (LCC), operator of the Lekki toll gate, tendered video footage of October 20, 2020, before the Lagos State judicial panel of inquiry. The Managing Director of LCC, Abayomi Omomuwa, who was present at the sitting submitted the video footage for investigation.

Abayomi Omomuwa said due to the vandalism, fire at the toll on the night of the shooting, network interference, and power outage, the surveillance cameras couldn’t capture what transpired during the shooting.

“The surveillance camera didn’t capture the shooting. It stopped recording around 8 pm,” he told the panel.

Highlights of today’s sitting at the Lagos State Judicial Panel of Enquiry on SARS by tech Entrepreneur, Editi Effiong.

10:37 A guy from the Police bomb squad came to sweep the panel.

It’s a physical sweep – no tech. He visually inspected the underside of the tables and seats.

11:25 When Ndukwe made a call to inform his mother of his whereabouts (Ikeja SARS office), the SARS lead took the phone, broke it, then stabbed him with a knife.

He was also stabbed in the back. He was also hit on the head with the butt of a rifle. pic.twitter.com/WxMlpYJGCm

11:31 When some SARS men asked if he should be shot, the men who brought him said “Not yet”. He was left in the sun till evening.

Ndukwe still doesn’t know what he did. He was told there was an intelligence report on him.

After being tortured, Mr Ndukwe alleges he was thrown from the first floor of a building. He passed out and woke up in hospital.

Nintendo asks if Mr Ndukwe recognizes the people who bought his goods.

Mr. Hamza Haruna is mentioned as the SARS officer who led his arrest & torture pic.twitter.com/nsVSH9ekLp

Ndukwe: I don’t know the people.

E: Do you have a union? Did they come to enquire about you?

He says he lost goods worth N30m

12:10 The panel has admitted the hospital documents brought by Mr Ndukwe as evidence.

12:49 Panel is back. Rinu wasn’t present during the earlier, but she’s here not.

12:58 LCC case has been called. The MD has seated and the LASG counsel has also registered presence.

The guy who was passing notes to the LCC MD earlier indeed is a member of the LASG legal team. pic.twitter.com/h5ZVIxIzw6

13:15 We’re at this weird point where nothing is going on, and no one knows what is going on.

Literally, no one in the audience knows what is going on.

Since we expect LCC to be answering questions later on, this note passed by a LASG lawyer to LCC might be relevant pic.twitter.com/hbpJkjVlDB

Paraphrasing: The network was interfered with, which stopped the recording. pic.twitter.com/gAfqDtRWiV

13:30 When curfew was declared, we obtained permission, and asked all staff to go, including those in charge of the generator.

None of LCC staff physically witness the #LekkiMassacre. We can only rely on the footage. This is because “they didn’t want to be provoke protesters”

13:44 LCC MD says he had no reason to invite armed security to the protests between 8-20 October.

He also states they have 3 surveillance cameras. 1 at the Lekki toll gate, one at Ikoyi and another at Chevron.

The cameras are linked via network, controlled from Chevron.

13:55 A message has been admitted into evidence. It was reportedly sent on 11/11 alleging SARS/RSS were coming to harass protesters.

They’re also sharing a company wide email sent on 20-10-2020 by HR to LCC staff to observe the curfew.

(In other words, there shouldn’t have been light at all between 4pm and 7:30.)

14:07 LCC states they never received any instructions to switch off power or remove cameras.

Also states the UPS did come on after IPP went off.

14:13 LASG counsel refers to the suspected bullet casing found at the toll gate – he says they still don’t know what that was.

14:14 He also asks if LCC MD believes the governor ordered the alleged shoot and is overruled by the chair.

But the gentleman in the fine suit (from NBA) says “No, hold up”. He notes that the LASG legal team was asking leading questions designed to help the LASG.

14:35 Chair also states the rules of evidence do not apply here, as the panel is guided by different rules.

I’m really wondering “so why are we here?” pic.twitter.com/DEEKP7aHLX

But for the NBA’s intervention, LASG and LCC fully planned to come in, answer to their own talking points and walk away to renovate the toll gate.

This is unconscionable. People died and the LCC is only bothered about the loss of revenue.

The BN Style Recap: 20+ Style & Beauty Stories You Need To Get Into This Week