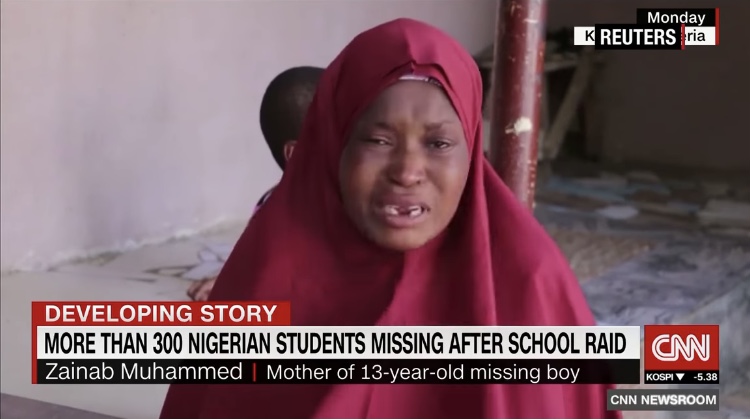 On Friday, a group of schoolboys were attacked and abducted from the Government Science Secondary School in Kankara by gunmen on motorbikes. Although some of the over 600 students were able to escape during a gunfight between the attackers and police, over 300 of them are yet to be found after an audit was carried out following the president’s directives.

Parents and guardians called on the Nigerian government to rescue their children during a protest in Katsina state by mothers of the abducted children. Pleading with the government, Zainab Muhammed mother of missing 13-year-old said, “if the government is just as they say they are, we want them to rescue our children because they have the capacity to do so. But their actions are slow because it is not their children that are involved in the incident.”

CNN reports that officials believe this may be a “kidnapping for ransom plot”, and say the attackers are making their demands (including taking helicopters out of the region) known through a teacher. Government officials say the kidnappers have been located by security agencies “deployed for rescue operation” by a helicopter and are negotiating the fate of the children. The president’s spokesperson, Garba Shehu on Twitter said, “The kidnappers had made contact and discussions were already on, pertaining to the safety and return” of the Kankara boys.

According to Vanguard, Boko Haram has claimed responsibility for the kidnap of the Kankara boys in over four-minute-long audio released to The Daily Nigerian on Monday. In the audio, Abubakar Shekau denied asking for any ransom and said that the kidnap was done to promote Islam and discourage un-Islamic practices.

What happened in Katsina was done to promote Islam and discourage un-Islamic practices as Western education is not the type of education permitted by Allah and his Holy Prophet.

They are also not teaching what Allah and his Holy Prophet commanded. They are rather destroying Islam. It may be subtle, but Allah the Lord of the skies and earths knows whatever is hidden. May Allah promote Islam. May we die as Muslims.

In a nutshell, we are behind what happened in Katsina.

This will not be the first time Boko Haram has carried out kidnapping activities including the 2014 Chibok girls who are still missing, and the boys who were killed in Buni Yadi, Yobe State.

On Monday, UN Secretary-General Antonio Guterres responded to the news. In Guterres’ statement by spokesperson Stephane Dujarric, it was stated that “The secretary-general strongly condemns the Dec. 11 attack on a secondary school in Katsina State, Nigeria and the reported abduction of hundreds of boys by suspected armed bandits.” The UN called for the immediate release of the Kankara boys, warning that the attack was a grave violation of human rights and urged security agencies to arrest and bring to book those responsible for the act, Daily Post reports.

Now That All SIMs Without NINs Will Be Blocked By December 30, Here’s What You Need to Do