Senegalese citizens staged a widespread demonstration against Macky Sall‘s administration, which kidnapped opposition leader Ousman Sonko on his way to a court hearing two days ago.

Sonko, is a 46-year-old leader of the opposition Pastef party and a former presidential candidate who finished third in the 2019 elections. His political career was cast into doubt last month when an employee at a spa where he claimed to have gone for back massages filed rape charges against him.

According to him, the accusation of rape is an “attempt at political liquidation,” as he accused President Macky Sall of fomenting a political conspiracy against him. Despite the fact that the young woman accusing Ousmane Sonko of rape testified in a closed court hearing last month, her case is yet to be resolved.

“Ousmane Sonko was heading towards the court following a summons from the judicial authority when he was arbitrarily arrested due to the presence on his route of demonstrators and sympathizers. The charges of disturbing public order and unauthorized demonstration against him must be dropped and, as long as these are the only charges justifying his detention, he must be immediately released, along with the three individuals who were arrested in same time as him, ”said Samira Daoud, Amnesty International’s regional director for West and Central Africa.

Sonko was transferred to the courthouse in Dakar on Thursday night from the research section of the gendarmerie, where he was being held in police custody, and his lawyers say they have not been contacted.

On Friday, demonstrators clashed with police in Dakar, Senegal, amid massive demonstrations against the detention of opposition leader Sonko, who is already charged with rape. Citizens are protesting the implementation of justice with #FreeSenegal currently trending on Twitter.

Senegalese protesters have voiced a variety of grievances, including a lack of job opportunities, economic hardship brought on by Covid-19, and President Macky Sall, whom they regard as arrogant, incompetent, and dictatorial.

From videos shared via Twitter, people hurled stones at the police, who fired tear gas. A police van rushed to a crowd of demonstrators in the suburban area of Medina, nearly driving them over. Protesters chanted “Free Sonko”.

According to Amnesty International, one person was killed earlier on Thursday when security forces fired live bullets at demonstrators in Bignonia, a town in the country’s south. Hours later, the group announced that the Minister of the Interior revealed 4 deaths in his declaration on Friday, March 5. 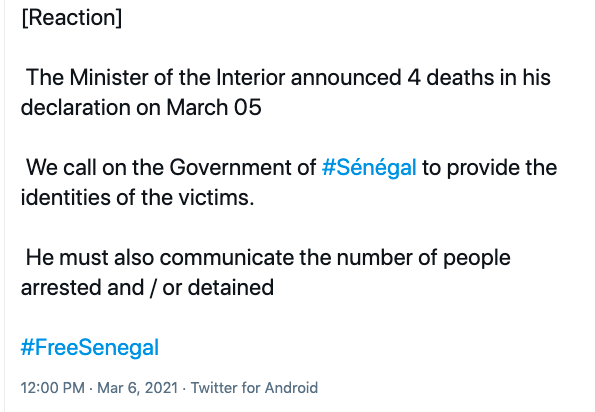 “We call on the Government of #Sénégal to provide the identities of the victims. He must also communicate the number of people arrested and/or detained”.

WALF TV and SEN TV had their television signals cut for 72 hours by the National Audiovisual Regulatory Council (CNRA), which warned in a statement that these two local channels, as well as another, 2STV, had declared in their retransmission the day before “repeated calls for a popular uprising by broadcasting images of insurrection in a loop”, calling them to “stop this irresponsible coverage”, Amnesty International reports.

Here are some clips from the protest as seen on Twitter:

Senegal has taken the #EndSARS  movement to the next level. Standing Twice As Tall.
We hail thee ?????

I’m asking the international community and anyone who simply cares about the well being In other to pay attention to the atrocities occurring in #Senegal. Protestors are being injured/killed and the internet is being cut off. #FreeSenegal https://t.co/N7CEQpIVVO

The policemen still our brothers it was necessary pic.twitter.com/HCmSN3fJMN

Violent protests in #Senegal: young people take to the streets nationwide in support of the main opposition leader who was detained Wednesday.#FreeSenegalpic.twitter.com/TuHirfRDbV

How Africans are showing support:

I hate what Macky Sall is doing to Dakar. I love that city #FreeSenegal pic.twitter.com/yZRWWTYXhM

Revolution going on in Senegal. From Nigeria, to Uganda, now Senegal. Africa must be free from strong dictatorships. The struggle is a marathon not a sprint.

I urge you Senegalese, don’t give up the fight, the world is with you. We hear you. Pray for Senegal ?? #FreeSenegal✊✊ pic.twitter.com/RMlwulCRxA

There is no Africa without Senegal. There is no Senegal without Africa.

Let's stand together as one with #Senegal pic.twitter.com/iXray5aig8

The situation of things in Senegal is wrong & deplorable:
– Leading opposition leader arrested
– Clamp-down of protesters by government
– At least one person killed
– Shut-down of social media & 2 TV stations

I stand with my people in Senegal with same voice, strength, energy and one spirit #Senegal #Africa #FreeSenegal pic.twitter.com/MBhsRW97qC