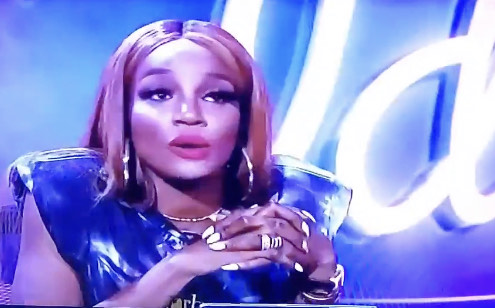 If you’ve been following the Twitter trends and are curious why singer/songwriter Seyi Shay is at the top of the chart, here’s a quick rundown.

Seyi Shay, as you might remember, is one of the judges on the popular ongoing talent show “Nigerian Idol.” Several singers performed on the show, which is still in its audition process, including a 17-year-old contestant whose performance Seyi Shay did not seem satisfied with.

Reacting to the performance, Seyi who was laughing said, “I am laughing at the fact that I just can’t believe what I just heard.”

The performer responded that he was nervous, and Seyi Shay continued:

Somebody lied to you. Somebody told you to come here and audition. And that person, you should go back and tell them that they’re not your friend because that was not a good audition.

You have a sweet talking voice and it comes out in your singing voice. But your performance, terrible. You’re never going to make money being a singer. Thanks.

She ended her judgement by saying, “I love you, you’re so sweet but you’re not a singer. If it’s songwriting, hit me up, we’ll talk. But that singing thing, it’s not going to work.”

Here’s what she had to say after seeing the topic trend on Twitter:

I’m feeling like #JudgeJudy right now. You either LOVE her OR you HATE her, and that’s quite ALRIGHT! Either way, Thanks for the #1 trend tweeps

I’m feeling like #JudgeJudy right now. You either LOVE her OR you HATE her, and that’s quite ALRIGHT! Either way, Thanks for the #1 trend tweeps ? pic.twitter.com/CBfAP3rLLJ

Many Nigerians have since taken to Twitter to voice their thoughts on the contestant’s performance as well as Seyi Shay’s decision.

With many taking to social media to encourage the young boy, some believe Seyi Shay was overly stern and should have approached her decision differently, whilst others believe she was merely acting as a judge, which often requires harsh criticism.

“I feel for the boy but my view about these things stay the same, harsh criticism is part of life & we all give & get it sometimes. He’ll be fine,” a Twitter user, @biolakazeem wrote.

Another user with the handle @aproko_doctor wrote, “Seyi Shay should have tried the sandwich approach Praise first Criticize Praise them again That’s how to give feedback Eg: nice voice, I think your performance could be better if trained, once again, nice voice. How you say a thing matters also.”

Here’s how everyone is reacting:

Before you come for Seyi Shay, watch the boy's performance first
pic.twitter.com/X2B9owE4tL

Seyi Shay has earned her money.She is obviously the designated antagonist & she's done more marketing for the show than anything they've done.I feel for the boy but my view about these things stay same,harsh criticism is part of life & we all give & get it sometimes.He'll be fine

Seyi Shay should have tried the sandwich approach

That's how to give feedback

Eg: nice voice, I think your performance could be better if trained, once again, nice voice.

How you say a thing matters also.

Seyi Shay should have literally passed her judgement without being condescending. If you have to say NO, just say it without mocking them.

There's something people defending Seyi Shay don't understand. It's not about being blunt; it's telling a young man that he’ll “never make money being a singer” that's the problem.
You can tell the person you don't like their singing without “declaring” them failures in future.

Nobody currently cares about Seyi Shay's mental health. It doesn't matter. Let's all curse her abi?

I wonder how she's doing. If she's having a splendid day and staying away from this brutal negativity.

Hates and insults, because she was too good at a job she was paid for.

Seyi Shay should not have said that the boy would never make it in music. She should have encouraged him to continue working on his vocal training and return for another audition.

We like playing the typical Naija pity card. I watched that guy's performance & I don't think what Seyi Shay said is outta place. It's #NigerianIdol not some Christmas Carol audition. Mayowa needs an unbiased feedback to pursue his passion. Musical skills can be learned. pic.twitter.com/P1hifgu3pE

What the freaking hell, what does Seyi Shay feel like sef, this is a 17 year old boy with a good voice that just needs training and she straight up told him he was horrible and the singing thing would never work, this is supposed to be a platform to help talents. I'm so disgusted pic.twitter.com/91Pqs57mZC

Jason Derulo & Girlfriend Jena Frumes Have a Bun in the Oven!