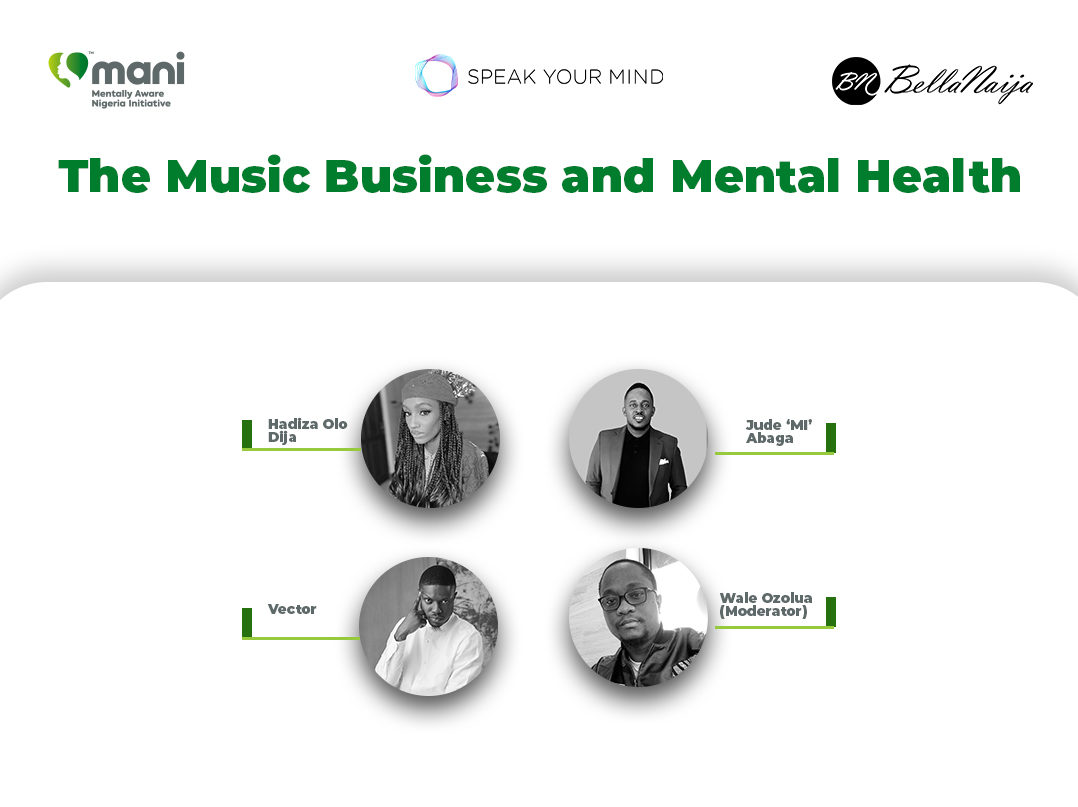 On Tuesday, 11th May 2021, the Mentally Aware Nigeria Initiative (MANI) hosted a session on the Twitter Spaces Platform event on their Twitter platform as part of its planned activities for Mental Health Awareness month.

The focus of this event was on mental health and the music industry in Nigeria and it had in attendance Jude ‘M.I.’ Abaga, Vector, and Dija. Music consultant, Wale Ozolua moderated this session.

The idea behind this conversation was to ask these music stars questions relating to mental health; how they cope with certain challenges as a result of pressure (financial and otherwise), personal issues, the creative process and everything in between, and more importantly how to improve mental health conversations in the music industry.

Wale: MI and Vector, let’s talk, how have you been coping since the start of the COVID-19 pandemic?

M.I.: The pandemic for most of us that were in Nigeria wasn’t just being locked up at home. It was EndSARS; countless stories of people dying and bad news. I thought I was good until mid last year. And then I started noticing some anxiety, for example, at work, I would be very short-tempered with people.

The sense of dread was total because it was from everywhere. I want to also acknowledge that I’m one of the people that’s very lucky; I have a beautiful home, I have the funds, the funds to take care of myself, I have my goons with me most of the time. In fact, I added like 20 kg. Because I’m sure that there are people whose experience was far, far worse than mine. I want to be able to acknowledge that.

Vector: There’s the typical, I lost some, like, I wouldn’t say relatives, but then again, by association, relatives. At least one or two people I know died from it. For me, I’ve been a bit more calm and observant because I am not one to freak out just because anything is happening. But I just found a way to manage it. Because at the end of the day, we have to adapt to this new reality now.

Vector: The most common health issue that I personally observed would be an identity crisis. We have been exposed to so many variants when it comes to things that could be argued as foundations that led to whatever we’ve all become as artists or musicians. And so there’s the part where all of us want to be the American rapper. The identity of who I am was a bit swayed by dealing with people who didn’t understand the core of what made me, me.

M.I.: I would say that from my vantage as I don’t have the data to speak, but I would say it would be some sort of bipolar disorder, or dealing with deep depression. And I will say that, even within our circles, it’s happened to a few people that I know. I had a producer friend who dealt with manic depression when he was coming up and a friend that would go into a depressing bout and wouldn’t even talk to anyone and just sort of disappeared off the radar.

Sauce Kid, one day was flipping through his phone and he showed me people sending him messages like, I’ll rape your seven-year-old daughter and stuff like that, like, this is what people constantly deal with. When we put this amount of pressure on artists, on celebrities and actors – and they’re constantly in the limelight and constantly hear what people say – when people deal with this sort of pressure that brings anxiety and that anxiety, you know, like that cortisol just stays in your blood. And that’s like the hormone that triggers the fight or flight response in humans. When this stays in your blood over time, it has adverse effects on your health.

Wale: How does social media amplify the pressure that comes with being creative and the creative process?

Vector: I know who I am. I feel and I don’t want to stress this too much, but we have to get to a point where we understand that who we are is enough. Because the only value we can hold on to, is the one with the knowledge we have of ourselves no matter what anybody says to you out there. You have to know who you are and accept who you are in totality. Will opinions change anything when it comes to doing stuff? Yeah. So you don’t have to let those things get to you, just be yourself. Once you know who you are is sufficient, others will just be another party talking. Once we get to the point where we love ourselves genuinely and appreciate ourselves genuinely what people say will barely matter.

Dija: Be okay with being you, not everybody’s gonna like it, but you’re gonna like yourself. If you don’t love yourself, you can’t love anybody else.

M.I.: Two rules, One is staying in a space where you are comfortable with yourself. I don’t enjoy being a famous person, the friends of mine that are here will tell you that when we hang around, I’m like the average guy, chilling most of the time, and so I have to be comfortable knowing that I define what success is for myself. I define what happiness is for myself and to be okay with where I end on my feet in terms of that. The second rule is – you have to give space for yourself to think. For example, I enjoy driving myself, I enjoy quiet nights, I can sit outside and just listen to music. That gives me the headspace to be able to find happiness myself.

Wale: What is mental health stigma and how does the culture/society propagate it?

Dija: Mental health in Nigeria I think comes with shame, yeah there’s a stigma and at some point in time, I had to be okay with whether there was stigma or not. I did a mental health concert, even though the support wasn’t as much but it was called the ‘Save Me Concert’ in 2018. It was literally about the people that showed up. Because a lot of people are living with personality disorders, especially in Nigeria.

MI: In most of our languages, we probably have one word that is used derogatorily. Because somebody’s saying, ‘you’re mad, you no dey well or you dey craze’, and that’s the stigma that surrounds it in our cultures because we don’t really have the language to talk about people being mentally ill, or physically ill.

A lot of the words that we use are often derogatory. And it’s something that as a culture, as a people, as a society, we need to start to move away from. In Nigeria, we don’t have the facilities to take care of people’s mental health. We don’t have a culture that allows people to say, ‘Hey, I’m going through something’, instead, what we do is shame it into hiding. I think these are some of the reasons why it’s tough for people that are in the public eye. I think that’s just indicative of what our societies are.’’

Wale: Vector, what would you say to someone who is going into the music business?

Vector: If you are going to invest in the music business, or you’re going to do the music business, you have to understand what is of most value – that art is truly an art. Like, it’s not just packaging you’re trying to do, because that’s also what is causing a lot of mental health issues for artists, you get signed on a label and they tell you the plot or the format for you is this other guy’s and it starts to mess with you mentally. So even when I do business, I understand the true value of what I’m bringing to the table. And this is one of the things that a lot of us need to learn about ourselves, you have to truly believe that you are actually bringing value to the table.

Wale: Dija, how do you handle being a female in the industry, maintaining relationships, staying relevant?

Dija: Sometimes, I don’t believe in first impressions at all, you know, they say first impression matters. I’m like, you don’t know. So, I give people a chance to meet them again. I realised that humans are really delicate, no matter how arrogant they come off. In fact, sometimes the arrogance sort of covers up how delicate we are.

Also, I wrote things down more. I could see the kind of things that were making me anxious, I wrote and just kind of crumpled them up and threw them in the garbage and they were gone. If I’m online and somebody’s telling me what I don’t want to hear, I block them. If I turn off my phone for 20 minutes or an hour, I’m not going to die. It’s okay to miss something. I don’t always have to be right in the middle of things.

In a conversation, I’ll always be that person open to just give the benefit of the doubt. And that’s just, it just worked for me. I always say this; women should talk to other women and men should try as much as possible to talk to or allow other men to speak up, to cry, to open up; there’s nothing wrong with it at all. Lastly, always have that one person you can go to. No man is an island.’

Wale: Vector, what are the ways to improve mental health awareness in the music industry?

Vector: By having conversations like what MANI is doing. I honestly take my time to share my experience, towards the goal of learning, just in case I’m wrong, I might learn something new. Like Dija mentioned outlets; these Spaces can be one of them. We just have to continue investing time and energy into things that are as real as this because, at the end of the day, we are really all human beings.

This is the second of several sessions MANI is hosting on Twitter Spaces with support from BellaNaija for Mental Health Awareness Month in May. You can find out more information by going to any of our social media platforms on Facebook, Instagram and Twitter.