The CBD and well-being company VAAY.com has launched research that rates cities according to how stressful their settings are for their residents. The firm chose to investigate prevalent exterior elements that make city living difficult for urbanites as part of its aim to encourage inner balance and mindfulness.

During this process, VAAY discovered that it could analyze numerous stress indicators among cities around the world to identify which cities are the least and most stressful for their residents. The resulting index shines a light on the ever-present factors that influence a person’s stress levels and gives insight into which global cities perform best in different areas and can be an example for their peers.

“Our objective with this study is to show what cities can achieve for their citizens through effective governance, robust environmental policies and well-resourced social welfare systems. The aim is not to single out the cities which may lag in any of these areas, but rather highlight those which are leading examples of what can be done to improve the wellbeing of their inhabitants,” comments Finn Age Hänsel, co-founder of VAAY.

“We hope that the results of the study serve as a useful barometer for cities and citizens alike to reassess their environments and work together towards developing cities that are less stressful places to live.”

How the study was conducted:

To begin the study, VAAY considered which macro factors contribute to stress, narrowing them down to four broad categories. Next, over 500 global cities were assessed against several stress indicators in these categories, before those without reliable data were removed, leaving a final line-up of 100 cities.

The study started with factors related to governance – assessing safety and security, and socio-political stability as indicators of how comfortable someone can feel in a city. To include stress indicators for all segments of society, levels of gender and minority equality were also scrutinised, as these demographics often have a higher chance of experiencing stress due to societal frameworks shaped by local laws and policy decisions.

Following this, VAAY compared how stressful each city’s urban environment is by looking at population density statistics in addition to air, light, and noise pollution levels, the amount of traffic congestion and weather conditions. These indicators were included to capture the stress-inducing effect of atmospheric contamination and extreme weather conditions, for example, wildfires, heatwaves, and periods of extended darkness, which are strongly associated with both physical and mental health conditions.

Next, several financial factors were evaluated, including unemployment rates, social security structures and local purchasing power. These indicators were included to reflect that economic problems are a cause of significant stress for many people, and have become increasingly widespread since the beginning of the pandemic.

The quality and accessibility of healthcare in each city was then compiled, as well as the availability of mental healthcare. Finally, a Covid Response Stress Impact score was generated by looking at how stressful each government’s pandemic response was for its population, as well as how successful it was. The study reveals which cities have the most stressful environments for their citizens, and which lead by example as the least stressful cities. 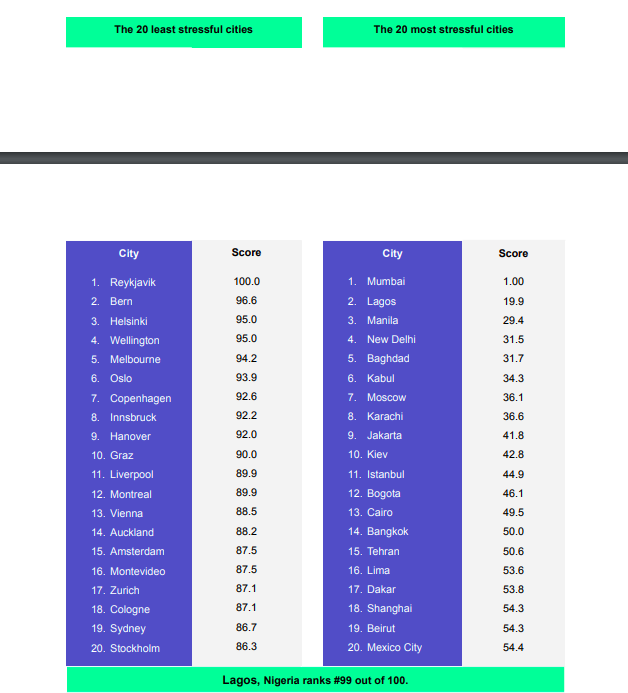 Click here to view the full press release, and click this link to view the results and full methodology of the study.