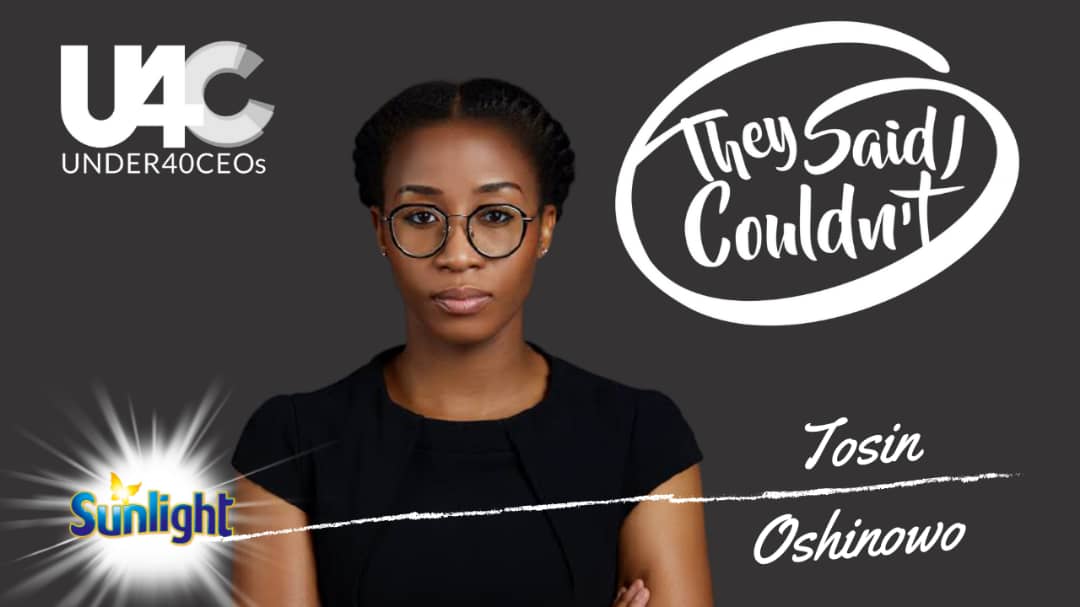 Episode 3 of ‘They Said I Couldn’t’ features the story of the daring architect and founder of leading architectural firm – cmDesign Atelier as well as design company Ilé-Ilà – Tosin Oshinowo.

‘They said I Couldn’t’ is a docu-series brought to you by Sunlight Nigeria in collaboration with Under 40 CEOs.

Oftentimes, we’re inspired by the stories of successful women. But hardly do we know what goes on behind the scenes. Their struggles, the several times they’ve gotten NOs for answers.
After being talked out of her dream and vision by that one person she thought would lend a helping hand, Tosin Oshinowo has moved past the distractions and evolved as a force to be reckoned with in the architectural space.

Meet Tosin Oshinowo in this episode as she takes us through not just her thriving journey as a woman in the architectural world, but also as the designer of one of the most notable landmarks in Lagos, Nigeria.

About Tosin
Tosin Oshinowo is a registered architect in Federal Republic of Nigeria and also a member of the Royal Institute of the British Architects. She has been lead architect at cmDesign Atelier (cmD+A) since 2012. cmD+A is an architecture design consultancy practice based in Lagos and is best known from the Maryland Mall, which opened in June 2016.

Tosin is an award-winning amateur photographer and has worked in a professional capacity on public art design installation in Lagos. Her written work includes an article on ‘the reclamation of public space in Lagos’, which was published in October 2012. She took part in the Playable Cities Lagos workshop with the Watershed Art Center, Bristol that was organized by the British Council Lagos in March 2016. She is a founding member of the ‘African Alliance for New Design’ (AAND), a think-tank that explores the value of design for the current generation of creatives on the continent.

Her interests are in architectural history and socially responsive approaches in architecture design and urbanism. Her written work includes an article on ‘the reclamation of public space in Lagos’, which was published in October 2012. She also started a column in 2017 for Omneka Online titled the Afromodernist: Identity, Architecture & Sexuality, a bimonthly article exploring cultural issues to do with African Identity in a modern context. This was a spin-off from her TEDx Portharcourt talk on ‘the the identity of an African Building’ in November 2017.
She enjoys collaboration projects with other creatives, for example, the ‘Angles and Muse’ artist foundation, done with acclaimed Nigerian artist Victor Ehikhamenor. The process was documented by Netflix’s ‘Amazing Interiors_episode 10’ and was the only African project filmed for the series, which aired in June 2018.

In 2017, she created Ilé-Ilà, which means House of Lines in her Yoruba native language. It is a Lifestyle Furniture line designed and handmade in Lagos, Nigeria. The brand focuses on period-conscious furniture in a contemporary African content. As an Architect, she has a natural affinity towards Product Design. She is particularly interested in the functionality of chairs, but also placing them in a Nigerian-African context. Unlike her minimalist approach to Architecture, which often uses a mute palette, her furniture design aesthetic is a bright explosion of colour. Ile Ila has been featured internationally in several publications of special note Harpers Bazaar Interiors in April 2018 and Elle Decor New York in January 2020. Ile Ila is currently showing at a joint design exhibition called Floorone9 at Art Twenty One in Eko Hotel till March 2020.

In 2017, she was nominated for the EbonyLife TV Sisterhood Awards for Entrepreneur of the year and also received a recognition from leading Ladies Africa as one of 100 most inspiring women in Nigeria. She also won the 3rd City People Real Estate Awards for Architect of the Year 2017 and in January 2018 she joined the Board for The Lagos Theatre Festival with the British Council. In March 2019, she was awarded the Lord’s Achievers Awards for Creativity, in celebration of World Achievers Day. In October 2019, she co-curated the Lagos Biennial, titled – How to Build a Lagoon with Just a Bottle of Wine?, which was an internationally recognized and documented event for contemporary art.

Mastercard MEA SME Confidence Index: 78% of SMEs in Nigeria are projecting revenues that will either grow or hold steady

A narrative that focuses on Passion, Craftsmanship and Excellence – Photos from The Macallan Mastery Launch in Lagos