“When I saw my son, I shouted and held him… The blood was too much, there was a bullet wound on his chest. His clothes were torn and the bullet had come out of his back.”

Stephanie Busari, for CNN, writes the story of Adesola (not her real name) who, after the Lekki massacre, held her son in her arm, in the pond of his own blood, a bullet hole in his heart. As he writhed in pain, he screamed “ah, ah, I’m in pain,” before dying minutes later.

It is a year since Nigerian youths protested, nation-wide, against police brutality in the country and were met with even more brutality. The protests were borne out of years of simmering anger and frustration of the Nigerian youth, and the reaction of the federal government was borne out of years of disdain, disrespect of their countrymen, and the littleness with which our lives are treated. The #EndSARS protests lasted for nearly two weeks in October 2020 before they were silenced by the shooting at Mushin, and then the shooting at the Lekki toll gate. Since then, every action, every comment, every statement of the Federal Government of Nigeria has spat on the bodies of the people we lost during the protest.

Nothing could have prepared us for the harrowing scenes of the #EndSARS protests – the curfew that was set, the bullets that were poured into the bones of people, or the knives that were dug into the necks of protesters. Ope Adetayo, for Al-jazeera, reports that “MushinToTheWorld Foundation, a community-based NGO that works for social change in the area, issued a news release five days later saying there were 67 casualties, including 15 deaths in the Mushin massacre that happened days before the Lekki massacre.” Premium Times reported that at least 99 people were killed in Lagos during the #EndSARS protests and had their bodies deposited at a morgue in the state.

Nothing could have also prepared us for the constant denials and pretence that followed the event. The discovery of an openly hidden camera by Babatunde Fashola at the toll gate, the lies of the Nigerian Army, the denial of the Lagos State governor, Babajide Sanwo-Olu, the subtle threat of the Nigerian president and the IGP, the freezing of protesters’ accounts, and many more.

One year later, and we are still in hell: SARS has not been fully disbanded; police brutality has not ended (as we speak, protesters are still being arrested and remanded in cells); everything the Nigerian youths asked for have not been met.

Adesola’s son was not the only one who died during the protests. Pelumi Onifade was a 20-year-old man who worked at Gboah TV, he was covering the #EndSARS protest in Abule-Egba when he was arrested by members of the Lagos State Task Force. That was the last people saw of him.

Jimoh Isiaq wasn’t even one of the protesters, he was standing by the roadside, his arms clutched to his sides – his right arm across his torso, holding up his left, chin resting on his fist – when he was shot.

Relatives of Wisdom Okon told CNN that he went missing after he went to the toll gate. He is still missing to date.

Okechukwu Iloamuazor, a 55-year-old man, was hit by a bullet allegedly shot by police officers during the protest and died on the spot. Oke was killed right in his home by thugs. There was another protester who was stabbed in the neck by thugs. 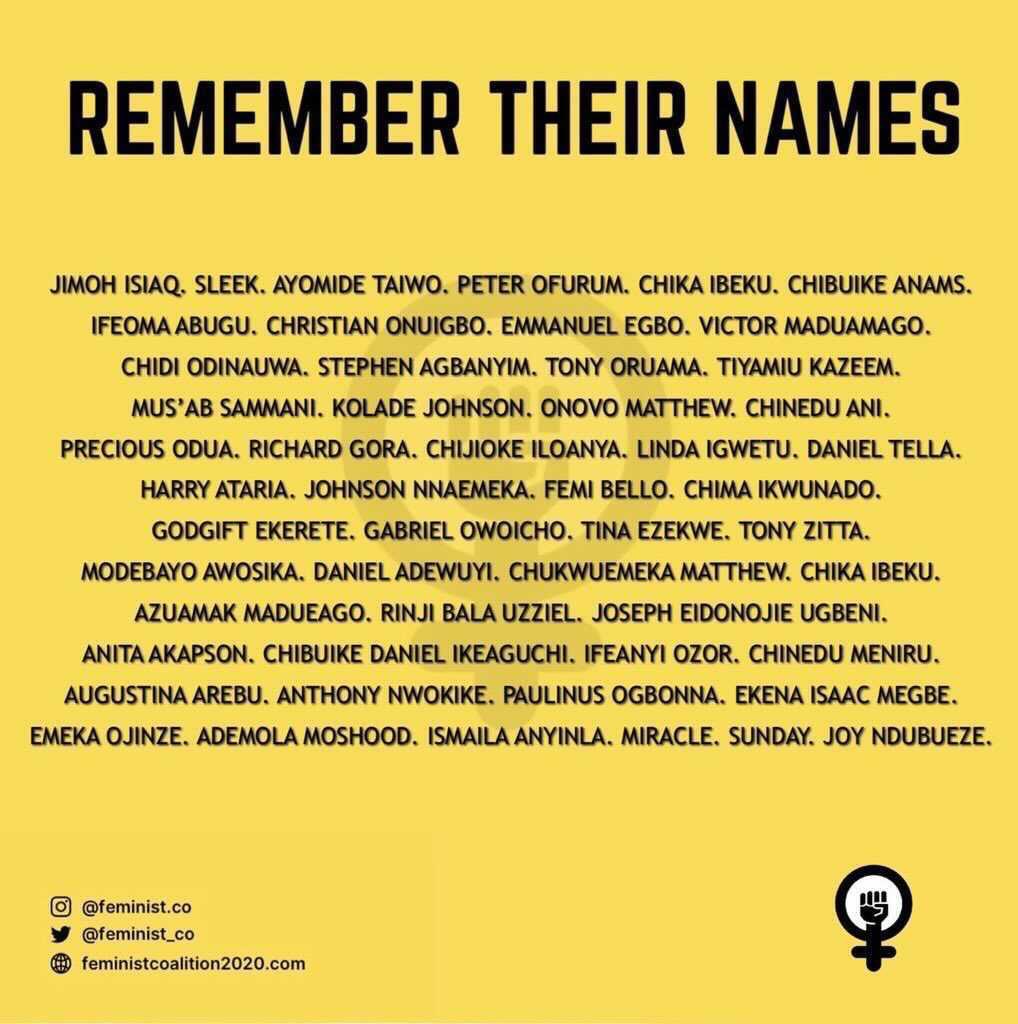 Image from the feminist coalition

There are tens and hundreds of people who were maimed and killed during the protests. Some who lost body parts. Many whose names and faces we do not know. People who were only fighting for justice but never made it back home. People like you and I.

Although nothing has changed, we choose to remember and honour these people. Today, we grieve for all the brilliant minds whose lives were unjustly cut short, and we grieve with all the families who held the corpses of their loved ones close to their bosoms, and those whose sons and daughters went missing and were never found. We grieve for those we do not know but are currently languishing in prisons just for exercising their civil rights.

On this #EndSARSMemorialDay, we are honouring everyone who participated in the #EndSARS protests all over the world, and encouraging everyone of us to never let this fire die, never let our spirits be broken, and never let our voices be squelched by the powers that be.

Chin up. We move.